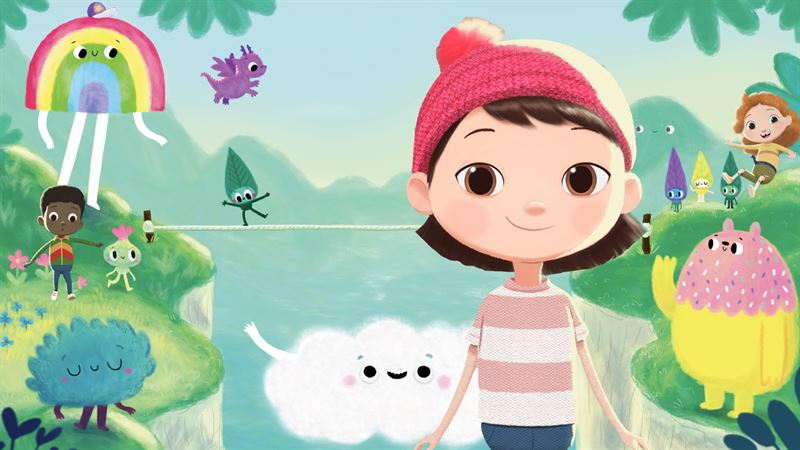 The next original production from Nordic Entertainment Group (NENT Group), the Nordic region’s leading streaming company, will be animated kids series ‘Mia’s Magic Playground’. The series is a spin-off from one of the world’s most popular digital properties, ‘Little Baby Bum’, and is produced in partnership with global entertainment company Moonbug. ‘Mia’s Magic Playground’ will be available in each of the Nordic languages, and will premiere exclusively on NENT Group’s Viaplay streaming service across the Nordic region in early 2020.

‘Mia’s Magic Playground’ (Swedish title: ‘Mias magiska värld’) follows Mia, the lead character from ‘Little Baby Bum’, and her best friends Oskar and Tilde as they explore an imaginary land and learn lessons about life for the real world. The 24 episode series is for four to six year olds and is developed by the creative team behind ‘Little Baby Bum’, with support from an award-winning Nordic animation studio.

‘Little Baby Bum’ has an online fan base of over 47 million subscribers and has received over 30 billion views on YouTube alone, with one video becoming the first ever non-music video to reach 1 billion views.

NENT Group’s original kids content slate also includes ‘The Great Escape’ and ‘Saga’s Stories’ – both recently renewed for new seasons – along with ‘Fixi in Playland’ and ‘Peppy Pals’. In August, ‘Saga’s Stories’ was nominated for Children’s Programme of the Year at Sweden’s Kristallen awards. ‘The Great Escape’ won the same prize in 2017 – the first time a kids series created for a streaming service claimed the biggest honour in Swedish TV.

Filippa Wallestam, NENT Group Chief Content Officer: “Mia and friends from ‘Little Baby Bum’ are among the most instantly recognisable characters for a whole generation of younger viewers around the world. We are bringing this global phenomenon to Viaplay and making it even more accessible with productions in every Nordic language, all in collaboration with a leading local animation studio to ensure that Nordic feel. Children are growing up streaming and, just like NENT Group’s other kids series, ‘Mia’s Magic Playground’ will offer a wonderful combination of entertainment and education.”

NENT Group has now launched 60 original productions and is set to premiere a minimum of 20 every year. In the past 12 months, season one of ‘Love Me’; ‘Fixi in Playland’; season one of ‘Honour’; ‘Manson’s Bloodline’; season two of ‘ALEX’; ‘Swedish Sin’; ‘Straight Forward’; season one of ‘Saga’s Stories’; ‘Wisting’; ‘The Inner Circle’; ‘Darkness – Those Who Kill’; ‘Hidden’; season two of ‘The Great Escape’; ‘The Truth Will Out’; ‘Four Hands Menu’; and ‘Pros and Cons’ have premiered.

As well as breaking Nordic viewing records, NENT Group’s originals are increasingly reaching audiences around the world. Amongst others, ‘ALEX’ has been sold to broadcast and streaming partners in Europe, Asia and the US; ‘Veni Vidi Vici’ has premiered on Hulu and is set for a US remake in partnership with Lionsgate; ‘Swedish Dicks’ has featured on Pop TV in the US; ‘Black Lake’ has been shown on BBC Four and AMC Networks-backed Shudder; and ‘Honour’ has been sold to RTL in Germany and VRT in Belgium.