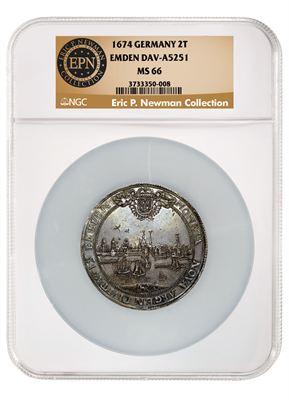 SARASOTA, Fla. (January 27, 2014) — More than 1,900 NGC®-certified world coin selections from the Eric P. Newman Collection, Part III, were sold by Heritage Auctions January 14–16 for an impressive $6,089,175 — easily exceeding the presale high estimate of $3.7 million. NGC was chosen by Eric P. Newman Numismatic Education Society to certify the first three parts of the collection, which have achieved total results of nearly $34 million at auction.

Eric P. Newman, who turns 103 in May, is considered one of the greatest numismatic researchers and writers of all time. While best known for his works on U.S. coins, Newman was keenly interested in coins from around world, a passion that was driven by his love of travel. Together with his wife Evelyn, Newman has visited more than 150 countries, an accomplishment reflected in the remarkable diversity of his world coin selections.

“The importance of the Eric P. Newman Collection cannot be overstated,” said Mark Salzberg, chairman of NGC. “Records continue to be smashed as collectors and dealers recognize that the sale of these selections is a once-in-a-lifetime numismatic event.”

Items being sold are from the extensive collection of Eric P. Newman Numismatic Education Society (a Missouri not-for-profit corporation) and have been assembled over a period of 90 years. Proceeds of the sale of all items will be used exclusively for supplementing the Society’s museum operations and scholarly numismatic research efforts and for the benefit of other not-for-profit institutions selected by Eric P. Newman Numismatic Education Society for public purposes.

NGC, the world's largest and most respected third-party coin grading service, was founded in 1987. From the beginning, NGC has committed itself to developing an impartial, trusted standard of

consistent and accurate grading. To uphold this commitment, NGC's full-time grading professionals are

no longer active in the commercial coin marketplace, and are prohibited from buying or selling coins to ensure impartiality. As NGC has grown to become the leader in third-party grading services, we have maintained a steadfast and uncompromising commitment to this standard. Learn more at NGCcoin.com

Corporation of America, and / or its related companies in the United States and / or other countries. All other names and marks referenced in this release are the trade names, trademarks, or service marks of their respective owners. 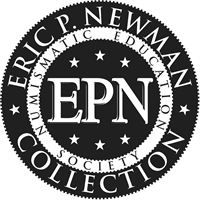