Is Apple set to take a potentially huge bite out of mobile payments market with NFC? 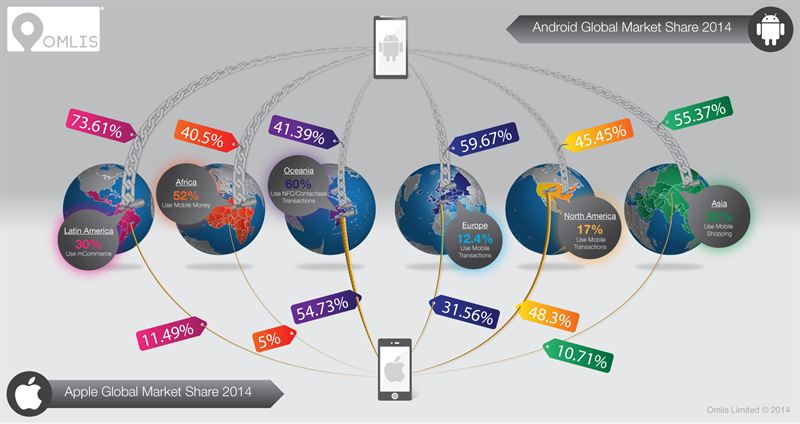 With the predicted announcement of the Iphone 6 in September 2014, will Apple finally have a device through which they can dominate the mobile payments market? Android OS has continued to prove its global dominance in most mobile payment markets which could expose Apple’s vulnerability especially as their device costs have the potential to alienate a large number of mobile users across the globe.

The Apple brand is synonymous with technology that is modern, elegant and revolutionary, so it’s no surprise that they have announced a move that is setting the brand up to dominate the emerging mobile payments market in Q3 of 2014. According to Appleinsider, KGI Securities Analyst Ming-Chi Kuo predicts the release of new IPad Airs, IPad Minis, a new 4.7 inch phone and the new iWatch. The game changers are the anticipated addition of NFC capabilities in the iWatch and iPhone devices as well as a potential partnership with VISA.

According to the Wall Street Journal, Apple are seriously considering options to allow existing users to make payments using iOS mobile devices linked to existing iTunes Subscriptions. The current Apple user experience allows shoppers to make payments in Apple stores by scanning barcodes that are authenticated and charged to their iTunes subscription, but Apple’s ambition to expand its offering to shoppers extends beyond their stores to third party retailers and service providers which a potential partnership with VISA could see the Apple brand ascend to new heights.

BI Intelligence identified one of “Apple’s most quietly powerful advantages” as their 600 million subscriber accounts on file, with most of these accounts having live credit card details. The fact that most Apple subscribers would have opened their subscription with a purchase of an Apple product means that the credit card details stored by Apple are live, setting a platform for simple and quick mobile transactions should Apple offer mobile payments as an option to their customers. Apple’s existing customer base and VISA’s extensive partner network especially through small businesses sets a platform that spells key challenges for their competitors in the race for mobile payments domination.

Markus Milsted, CEO of global mobile payment solutions provider Omlis, said, “The mobile payments industry is experiencing immense growth and Apple’s positioning is a strong indication of the market potential. Apple’s ability to leverage its existing customer base and customer loyalty to their products and brand could be the catalyst the mobile payments market really needs.”

Armed with such a large and active subscriber base, Apple’s ambition is all the more realistic especially as existing devices such as the iPhone 5s currently allow customers to transact in Apple stores using NFC powered by Touch ID authentication and iBeacon technologies. It is widely predicted but unconfirmed that the next Apple mobile device, the iPhone 6, would include pre-installed NFC capabilities to facilitate a mobile wallet function for users of this device.

Markus from Omlis also added that, “Apple still have to deal with streamlining the payment process to the same standard that we at Omlis provide our retail, banking, telecoms, payment service providers and app developer customers, ensuring customer confidence through uncompromised customer transaction security which is their main challenge. That being said, having a strong global brand certainly doesn’t hurt their ambition.”

Since the introduction of the first generation of iPhones in 2007 that sold 1.39 million units, Apple achieved sales of over 150 million units by 2013 and sold over 400 million iPhones between these two periods.

The brilliance that surrounds how Apple create such appetite for their products is the speculation and hype that their silence encourages. And although this strategy fuels consumer anticipation and excitement, the launches of previous Apple products dictate that nothing is ever certain until officially confirmed by Apple. With the mobile payments market predicted by Forrester to be worth a staggering $19 billion by 2017, this potentially presents a forbidden fruit that even Apple can’t help but take a huge bite from.

History shows that most markets touched by the Apple brand are held captive, bound by the spell cast by such a strong brand and the same fate seems to be predicted for the mobile payments market. This being said, Apple may want to consider how they would capture Android users especially as current Apple services are limited to the iOS platform and currently exclude the Android platform, which forms the core operating system for brands such as Samsung and Sony. This lack of flexibility could break Apple’s spell in countries where Android users are dominant due to reluctance from merchants to partner with the less dominant OS platform in their market. A partnership with VISA may create a smoother path to global domination in the mobile payments market but recent stats reveal Android dominance as the OS platform of choice across most continents, especially emerging economies who are leading the way in global payment adoption and transaction.

By January 2014, Android OS accounted for over 70% of mobile operating systems in Europe and is compared to Apple’s iOS system which accounted for just 19%. Android currently accounts for 73.61% of the Latin America OS market with Panama, Bolivia and Argentina identified as the largest Android user markets by eMarketer, compared to Apple’s 28.1%. Information provided by Statcounter showed that the adoption of Android OS as the operation system of choice was also on the increase in Africa. Africa experienced increased android OS penetration from 16% in January 2013 to 27.9% by January 2014 and currently at 40.5% whilst Apple’s iOS showed a user decrease from 6.3% to 4.2% within this same period.

Apple undoubtedly brings to market a strong, trusted brand that consistently delivers ground breaking innovation. Couple this with VISA who manage the largest global payments network and it would not be unreasonable to conclude that these two coming together spells immense challenges for the completion. Dominance could still be a reach too far for Apple especially with Android OS being the main OS in Africa, Asia, Europe, and Latin America leaving Apple IOS dominant in the Oceania and only just ahead of Android in North America. So is dominance of the mobile payments market a bite too much for Apple? It’s fair to say it really does depend on the market but time will tell.

Omlis is global provider of mobile payments solutions to the mobile payments ecosystem, transforming any network to offer instantly secure transactions. As fraud becomes an ever increasing issue across all technology platforms, Omlis brings a highly powerful and differentiated solution to mobile commerce security that is completely secure, un-compromised and fraud-free.