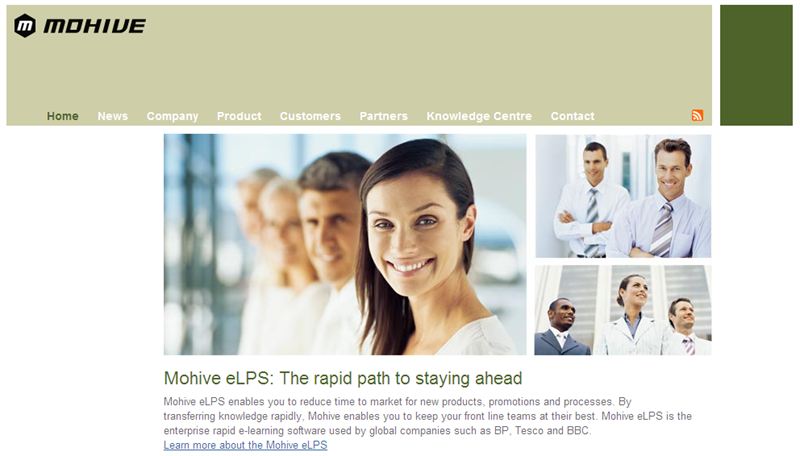 Mohive, whose e-learning software is used by companies such as Coca Cola and the BBC, today announced the launch of its new website - www.mohive.com - which uses EPiServer’s award-winning Content Management System (CMS).

The site was the first win in the UK for interactive agency Making Waves which opened an office in London earlier this year - www.makingwaves.com. Making Waves has been an EPiServer partner for eight years and has used its CMS for many sites developed by its European offices. Making Waves was responsible for the technical aspects of www.mohive.com from selection of EPiServer to final implementation. Training was also given to help Mohive users gain an understanding of the EPiServer CMS editor and administrator interfaces, as well as the functionality and possibilities with EPiServer CMS. Lars Unneberg, CEO of Mohive, said: “The web is our key channel for generating leads and interacting with customers and prospects. We wanted a site that was both visually appealing and would allow us to quickly and easily change and update our content, offer new promotions and publish different events. Making Waves’ long-standing relationship and experience working with EPiServer gave us the confidence to use its CMS”. Thousands of organisations and companies of all sizes are saving time, resources and money by using EPiServer to manage their websites, intranets, online communities and online marketing activities including Mazda, The Lawn Tennis Association, FIFA, Toshiba and the United Nations as well as charities such as Save The Children. Svein Berggreen, Managing Director of Making Waves GB, said: “Working with Mohive is an important strategic win for us having set up operations in the UK earlier this year. EPiServer CMS continues to be our CMS of choice for a whole variety of reasons including ease of implementation and cost”.