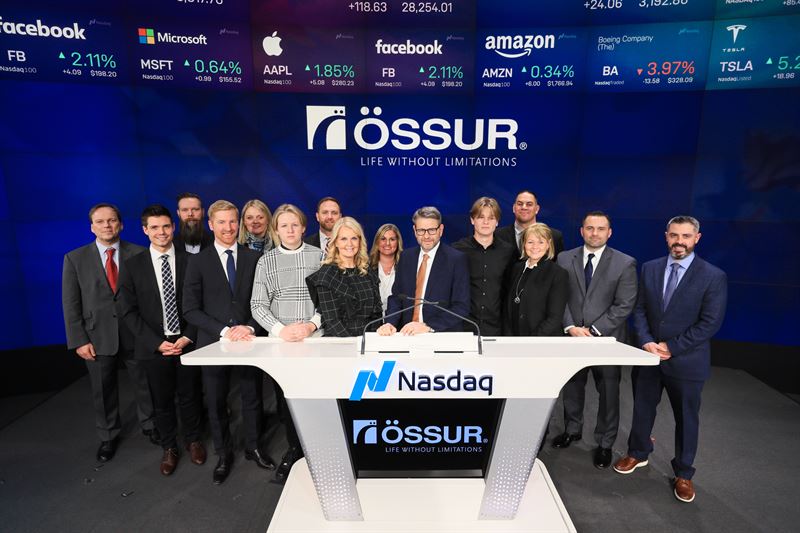 Upon its first day of trading on the Iceland Stock Exchange in 1999, Össur (Nasdaq: OSSUR) made history as Iceland’s largest Initial Public Offering (IPO), with more than 8,000 shareholders purchasing shares in the company, corresponding to approximately 3% of Iceland’s population at the time. At that time Össur had 120 employees, reported annual revenues of approximately US$18 million, and a market value of around US$60 million. Ten years later, Össur was listed on the Nasdaq Copenhagen exchange and is today one of the 30 most valuable companies traded there with a market cap of approximately $US 3 billion.

Since its 1999 IPO, the company has transformed from a small Icelandic prosthetics provider to a global leader in non-invasive orthopaedic technologies, delivering a 20% compound annual growth rate (CAGR) with a healthy combination of organic growth and acquisitions. Reported revenues in 2018 amounted to $US 613 million and the company currently employs close to 4,000 people in 26 operations all around the world.

Today, Össur’s major shareholders include William Demant Invest A/S, along with several other strong Nordic and U.S. financial institutions. The company has thrived under the leadership of Jon Sigurdsson, President & CEO, who has led the organization through its substantial growth since 1996.

“We are pleased to have achieved this milestone in our history as a publicly traded company,” Sigurdsson said. “Our strong growth and healthy financial performance has been fueled by our tireless commitment to innovation, and we remain steadfast in our dedication to help even more people enjoy a life without limitations.“

Össur currently ranks in the top two in both of its primary business categories: prosthetic technologies for amputees, and non-invasive orthopaedic bracing and supports. Steady growth is fueled by a significant investment in innovation which currently amounts to about 5% of sales annually. As a result, Össur introduced 25 new products in the past year, in addition to several incremental updates to products already in the market.

Össur was established in 1971 after amputee and prosthetist Össur Kristinsson developed the world’s first silicone prosthetic liner, the Iceross.  The company began exporting its products in 1986 and has grown from a single, niche product provider to a global leader in non-invasive orthopaedics today.

In 1999, the company began exploring a series of strategic acquisitions, broadening its overall portfolio of innovations and fueling the development of many technological “firsts” in the field. In addition to the iconic Cheetah running prostheses, the only such technology ever to be trialed in Olympic competition, Össur introduced the world’s first Bionic prosthetics, including the Power Knee, the Rheo Knee and Proprio Foot, all of which have artificial intelligence capabilities that allow them to sense and respond in real-time to changes in it speed and walking style.

With the 2016 acquisition of Touch Bionics, Össur expanded its portfolio to include the revolutionary i-Limb and i-Digits lines of Bionic upper extremity prostheses.

In recent years, the company has also pioneered the clinical exploration of the world’s first mind-controlled lower limb prosthetic technologies. Össur’s leadership in orthopaedic bracing includes the ground-breaking Unloader One knee brace, which has the most published clinical body of evidence of any knee brace[1] and has been clinically proven to reduce pain, improve function and decrease the use of pain medication among patients suffering from Osteoarthritis, the most common form of arthritis and a leading cause of physical disability among older adults.

“Throughout our history, Össur has sought to apply biomechanical solutions that mirror the body’s native design and function as closely as possible, with the goal of improving people’s mobility regardless of their age or activity level,” Sigurdsson said. “We are grateful for the contributions of our employees, the support of our shareholders, and our strong relationships with the clinical community over these many years, which have helped us continually extend the boundaries of possibility and commercialize many exciting solutions to help more people around the world.”

He added: “Moreover, we are very excited about the future. We continue to actively participate in clinical explorations involving both our prosthetic and non-invasive orthopaedic bracing technologies, to ensure that our portfolio of products continue to harmonize with new advancements in the field. We cannot wait to see what the next two decades will bring in terms of growth and opportunity for our company.”

Össur (NASDAQ Copenhagen: OSSR) is a global leader in non-invasive orthopaedics that help people live a life without limitations. A recognized “Technology Pioneer,” Össur focuses on improving people’s mobility through the delivery of innovative technologies in Prosthetics and Bracing & Supports, by investing significantly in research and product development to create award-winning designs with consistently strong market positions. Successful patient and clinical outcomes are further empowered via Össur’s educational programs and business solutions.  As part of Össur’s long-standing commitment to social responsibility, the company has been a signatory to the United Nations Global Compact since 2011, and also participates in the Nasdaq Nordic and Baltic exchanges’ voluntary guidelines for Environment, Social and Corporate Governance (ESG). Össur is headquartered in Iceland, with major operations in the Americas, Europe and Asia, and additional distributors worldwide. www.ossur.com