As in the previous year, the winner of the 39th edition of the Ötztaler Cycle Marathon comes from Vorarlberg: Mathias Nothegger celebrated a historic victory as he set a new and truly distinguished course record! Alban Lakata became fourth and just missed the podium at his premiere. In the women's class German Christina Rausch dethroned Swiss serial winner Laila Orenos. 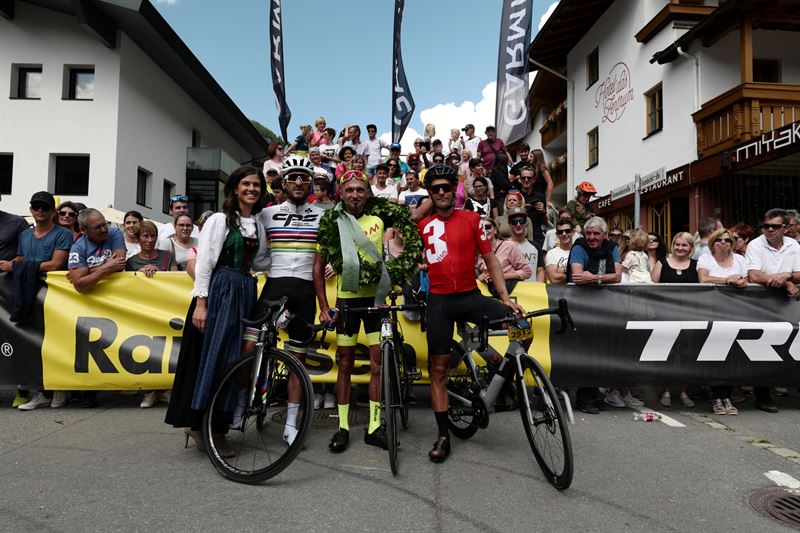 This morning at 6:45 am on the dot the starting signal for the 39th Ötztaler Cycle Marathon was fired in Sölden - Ötztal at eleven degrees Celsius. At the premiere event in 1982, some 115 hobby athletes were at the start; on their racing bicycles that sometimes weighed 14 kilograms and even more. Today, 4285 participants - 4024 men and 261 women - tackled the ultimate racing bike adventure across four Alpine passes: Kühtai, Brenner pass, Jaufen pass and finally 2509 meter high Timmelsjoch. Among the participants were countless top stars, such as former professional Fränk Schleck or former ski jumpers Andreas Goldberger and Martin Koch. But the majority of the starting field were amateur and hobby athletes from 34 different countries.

Across Kühtai and Brenner pass the female competitors Ils van der Moeren from Belgium, five-time winner Laila Orenos from Switzerland and Germany's Christina Rausch never let their rivals out of sight - for a continuing time. In the men's race Martin Ludwiczek from Maurach set the pace right at the start. He passed Kühtai as a soloist but at Brenner pass he was overtaken by twelve athletes. Just behind there was a larger chase group of about 50 cyclists, including all the favorites.

The Ötztaler Cycle Marathon has been a myth for many years and 600 volunteers are responsible for securing the route! The registration phase for the 39th edition began at the end of January and 15,000 people from all parts of the world registered within only a few hours. But only 4000 got one of the coveted starting places for the "world's most scenic amateur cycling race". Among them were today's top cyclists who gave everything right after Brenner pass. After new top groups had formed again and again, the wheat was separated from the chaff at Jaufen pass with an average gradient of twelve percent. Former pro Johnny Hoogerland passed the Jaufen pass before last year's third and arm-amputee Patrick Hagenaars. 22 seconds behind followed Stefano Cecchini, winner of the 2017 edition, who led a 12-man group together with Alban Lakata. Last year's winner Mathias Nothegger had his problems on the penultimate pass and lost some time.

But on the downhill stretch to St. Leonhard, where the climb to 2509 meters high Timmelsjoch started, Nothegger - already considered beaten - shot to the top with a daredevil downhill ride together with Italy's Mattia De Marchi. Followed by a chase group of twelve cyclists who were more than three minutes behind them. But 1759 altitude meters and 29 kilometers still awaited the cyclists in Passeiertal, heading towards the southern ramp with a gradient of up to 14 percent - the so called last "executioner" of the Ötztaler Cycle Marathon. A hot fight began behind the leading group including also MTB World Champion Alban who set the first attack.

At the Schönau refreshment area Germany's Robert Petzold moved to third place behind Nothegger and De Marchi. But before Timmelsjoch pass it was Alban Lakata who was in third place and over three minutes behind the top duo. In the meantime, the race winning situation became more seriously: 40-year old Mathias Nothegger attacked at the tollbooth and when De Marchi could connect to the top group again, the guy from Vorarlberg opened the throttle: "I knew that in the downhill I was faster than De Marchi. So I staked everything on one card and could leave the others behind. In the downhill I risked it all. This second victory after last year's win is really a dream for me!" And Nothegger fulfilled his dream with a new course record. He improved the previous record of Switzerland's Hugo Jenni from the year 2001 by ten minutes! "That was the real highlight for me. This year's Ötztaler was studded with top cyclists and the course record was only possible because we tried to cycle at full speed from Kühtai onwards."

The East Tirolean Alban Lakata finished fourth as the second best Austrian. In the sprint for the podium he was closely beaten by the Italian Tommaso Elettrico. The multiple world champion was also the only cyclist in the starting field who has previously competed in the Ötztaler and in the 2017 PRO Ötztaler 5,500 UCI race. "It's difficult to compare them. It went very well today and I'm really satisfied with my premiere at the Ötztaler Cycle Marathon. Today this race convinced me that I want more. Maybe victory is still possible for me!" Patrick Hagenaar's finished sixth - the third best Austrian. By the way, the second Mattia De Marchi has already been racing as a pro for Hrinkow Advarics Cycleang in 2017. The year before he won a Tour of China stage as a cyclists for Androni Giocattoli - Sidermec and also the GP Kranj in 2016.

Thrilling moments in the women's class

The three leaders in the women's race conquered Timmelsjoch in a hot final fight: after Laila Orenos was able to leave behind the others at the beginning of the climb, Christina Rausch attacked and overtook the Swiss serial winner. At the summit, the German had a comfortable lead of over two minutes on Belgium's Ils van der Moeren who also overtook Orenos. The premiere winner Christina Rausch from Hamburg could not believe it when she passed the finish line: "Two years ago I was closely behind Laila and last year I had two injuries. It's unbelievable that I made it today!" Tirol's Daniela Traxl-Pintarelli (8: 00.11 hours) came in fourth, followed by the Carinthian Anita Zankl (8:02.48 hours).

OC boss Dominic Kuen drew a very positive balance of the 39th Ötztaler Cycle Marathon: "The race went very well! We experienced a great event in fantastic weather and the live stream of more than 15 hours showed splendid pictures of the Ötztaler. The 40th Ötztaler edition will take place next year on the 30th of August. All cycling fans have one more day to register for the race as it is a leap year. The registration period starts on 01 February and ends on 29 February."

Already on Friday, the "Bike4Help" Prologue heralded the start of the Ötztaler road cycling weekend. 145 starters took part in the mountain sprint where a 1.2 kilometer long track covering 129 altitude meters had to be conquered. The entry fee of ten Euros per participant and the net proceeds went to the "Bike4Help" charitable association. At this 2nd edition the Dutch Remco Snippe set the best time of 3:51.4 minutes. Last year's record time of 3:36 minutes by Daniel Federspiel was not beaten. As in the previous year, Lorraine Dettmer won the ladies' title in 5:02.9 minutes - she was nine seconds faster than last year.