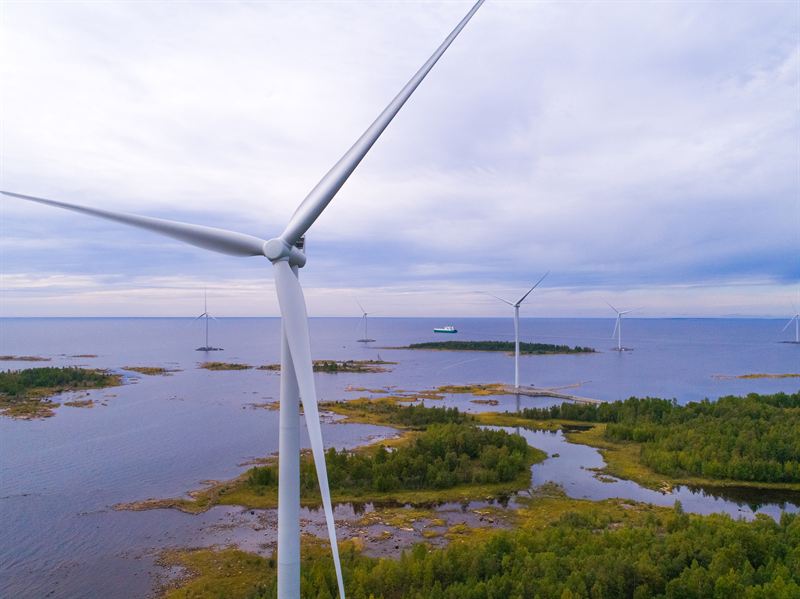 OX2 has now commissioned and handed over the 42 MW Ajos wind farm to its owner IKEA Finland. In doing so, the first large-scale wind power re-powering project has been completed in Finland.

In December 2015, IKEA Finland signed a purchase agreement with OX2 for 13 wind turbines in Kemi, northern Finland. All the terms of the agreement have now been met and IKEA Finland has taken ownership.

“The renewal of the Kemi Ajos wind farm has been an important project for us on our path to gain energy independence. The IKEA vision is to create a better everyday life for the many people and we want to do our part in ensuring a more sustainable future for the planet. Investing in wind power is a concrete example of our commitment to the environment”, says Tiina Suvanto, Sustainability Manager of IKEA Finland.

The project is a so-called re-powering project and the first of its kind for wind power in Finland. Originally, there were ten older wind turbines here, located on artificial islands offshore and along the shoreline. These have been replaced by 13 modern wind turbines, which are expected to produce approximately 160 GWh/year, which is more than twice as much production as before.

“We are proud to deliver another wind farm to IKEA. It has been a challenging and instructive construction project in a tough climate and with a short offshore construction season,” says Paul Stormoen, Managing Director of OX2 Wind. "We would like to thank IKEA Finland, the municipality, the landowners and our subcontractors for their outstanding cooperation which has enabled the wind farm to be commissioned on schedule.”

OX2 will continue to manage the administration and operation of Ajos wind farm. In addition to the Ajos wind farm, OX2 manages another four wind farms for IKEA, three of which are located in Sweden and one in Lithuania.

- The plant is expected to produce approximately 160 GWh/year, which corresponds to the annual consumption of household appliances for approximately 32,000 households (household = 5,000 kWh / year)

- Approximately 850 man-months of work were generated during the construction period. During the operational phase, at least 4-5 man-years will be needed for service and maintenance for about 25 years, i.e. the full service-life of the wind farm.

OX2 is a renewable energy company with operations in wind power, solar power, bioenergy and geothermal energy. By offering sustainable investments, system solutions and products to financial operators, businesses and consumers, OX2 is a driving force in the conversion towards a renewable energy sector and a fossil fuel-free vehicle fleet. The company has offices in Sweden, Finland and Lithuania.

OX2 has developed and constructed almost 1200 MW of wind power and is one of the leading players in onshore wind power in northern Europe. In the field of bioenergy, OX2 operates two biogas plants in southern Sweden, with an annual production of approx. 90 GWh of biogas. For more information, please visit www.ox2.com