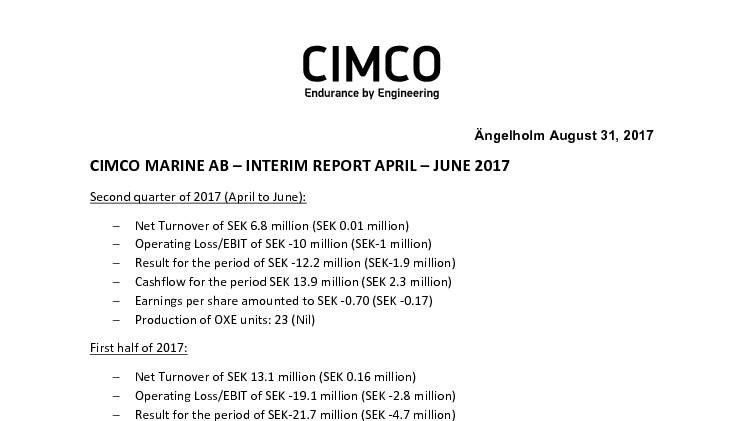 Significant event in the second quarter:

Significant event after the reporting period:

-      the company will not meet the previously communicated sales target of 500 OXE units during 2017. Consequently, the turnover target of 150MSEK and the positive cash flow target for 2017 will also not be met.

Comments by the CEO, Cecilia Anderberg:

During the second quarter of 2017, the company continued to maintain its production capacity to the previous quarter (23 units compared to 25 units). The company however has faced delays within its supply chain as well as containing quality issues arising with its suppliers and parts. In addition, our procurement strategy in May and June were somewhat curtailed by limited funding which in turn impacted on our ability to source parts quickly. We secured funding through a very successful IPO as well as a bridging loan. In the same manner, July and August were affected by the holidays with most suppliers. We continue to work hard to secure further funding as specified in the prospectus. Due to the delays and additional finance cost our net funding requirement (after cost) is now circa 70MSEK (60MSEK previously mentioned in prospectus). We are confident this can be secured by next month.

We will be targeting to achieve a production run rate of at least 25 units per week during 2017, after a short delay in our production ramp up.

Demand for our product continues to exceed our production capabilities and we have therefore not pursued to increase our order book, which remains the same as the previous quarter.

We have signed a product development agreement with BMW to seek to develop its 6-cylinder engine and to offer a higher-powered diesel outboard of 300+hp to our customers. This will enhance our range of engines which will go towards meeting our long-term production numbers.

The company also entered into an agreement regarding patent licenses with Seven Marine LLC and Volvo Penta AB. The agreement materially strengthens Cimco’s position in the segment for diesel outboards up to 400 bhp and our business case. Under the agreement, Seven Marine/Volvo Penta obtains neither any production licenses for that segment nor for our belt driven propulsion system. Discussions with Volvo Penta on how to expand the relationship further will continue this autumn.

Whilst we are disappointed with the short-term setbacks, I strongly believe that we have the right skills, experience and ambition to meet our long term stated targets.

We are aiming to ensure a procurement strategy that meets the company’s targets for 2017 as well as containing quality issues. Following a short delay, we expect to ramp up production and meet our target of 25 units per week.

UFAB, our assembly partner, has continued to recruit further personnel which will ensure a strong ramp up later in the year. Our key suppliers are expected to meet our volume targets.

With structured procurement in place, the company will also focus on material cost savings, some of which should filter through later this year.

As announced in the PM of Aug 29th and Aug 30th the production ramp-up has been temporarily affected by delays in setting up the added capacity and related quality assurance programs with the suppliers. This affect only a very few suppliers/components and is temporary so we feel strongly that we will be back on track as far as ramp-up in a matter of weeks and we are not looking at a lengthy delay in this process.  Otherwise the operations are proceeding according to plan.

Sales and after sales

Our key distributors continue to be supportive and there are no changes to the demand for our product. All units produced have been sold and our order book remains the same as with the previous quarter.  We expect to expand the order book as soon as the production ramp-up is in a phase where it can meet the demand.

There have been tests on the OXE carried out by enforcement agencies in the US as well as the far east and we expect the results to be completed later this year. We are confident that our product will demonstrate all the qualities that we have promoted and expect large orders to flow through in due course.

Our key focus is to continue building on training our distributors and provide them with strong after sales support.

In June, the Product Development Agreement (PDA) with BMW was signed. The PDA comprises concept development on 300+ hp diesel outboard based on a 6 cylinder BMW diesel engine. The engines have been delivered and work on development has commenced.

The company has made two key appointments in the last two months as follows:

Per Engelsson who is Chief Technical Officer (CTO). He will look after product development and maintenance and has extensive experience in managing development for series production. He is also an expert in quality assurance on engineered focused machines. He was as project manager, group manager and R&D manager in project-intensive companies such as Getinge Group AB.

Stefan Nybonn is Chief Commercial Officer (CCO). He is responsible for Sales and marketing as well as after sales service. He has had leading positions within Electrolux and Huskvarna. In Getinge Infection Control.  Stefan have had several executive positions Director of operations and Managing Director.

As mentioned in Cimco’s prospectus in June 2017, the company is seeking further debt financing to enable it to meet its working capital requirements for the rest of 2017. The company is confident that this will be achieved during September.

The funding will be used to re-finance all current loans with third parties which total 26MSEK as well as finance the company’s working capital requirements and operational expenses.

For the complete Half Year Report:
http://www.oxe-diesel.com/category/financial-report/

Cimco Marine AB (publ), is obligated to make this information public pursuant to the EU Market Abuse Regulation. The information was provided by the contacts above, to be submitted for publication on August 31, 2017 at 8.00 AM.