Cimco Marine AB (publ.) has developed the next generation diesel-powered outboard - OXE 300. It is the world’s most powerful diesel outboard and the most fuel-efficient outboard in its power range – consuming some 40% less fuel than a modern gasoline outboard. Its unique, game-changing, patented design is capable of delivering 680 Nm of torque (the highest in any 300 hp outboard), available already at 1750 rpm – Perfect for commercial maritime operations where strength, power, low fuel consumption and long range are key.

The OXE 300 will be displayed and ready for tests on the water at Genoa Boat Show 20th to 24th of September in collaboration with Rama Marine. Orders for the OXE 300 can be placed starting 20th of September via the OXE distributor network. Production will commence in May 2020. 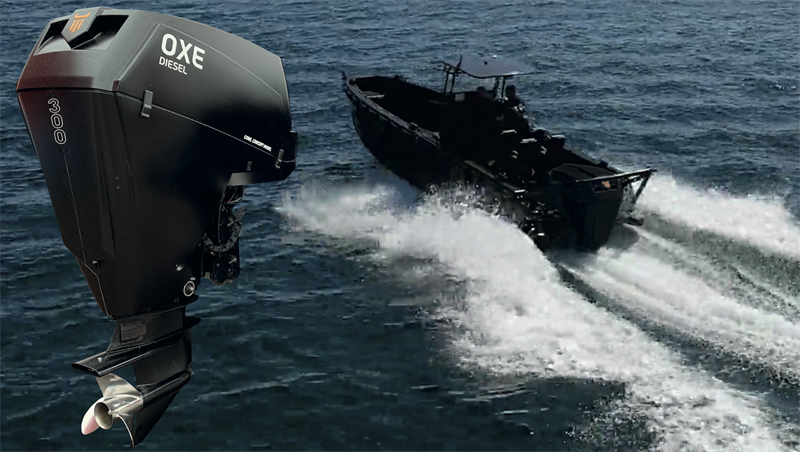 OXE 300 to be released for on water testing at Genoa Boat Show.

After collecting many thousands of operating hours in commercial applications across the globe, the current OXE series of Diesel Outboards has clearly demonstrated its capabilities of strength, durability and fuel efficiency.

“We are now particularly proud to present the new OXE 300 setting the benchmark for 300hp outboards. When designing the OXE 300 the collective operative experience from hundreds of OXE Diesel Outboards currently in operation was duly utilized to secure highest levels of reliability, robustness and maturity. Our specific commercial clientele deserves the best possible performance and economic advantages whilst complying with the most stringent environmental rules and regulations. For the commercial operator Endurance, Reliability, Power and Control of the OXE 300 is key” says Ralf Losch, Chief Commercial Officer at Cimco Marine AB.

In the tests performed to date - the OXE Diesel 300 has proven to consume 40% less fuel than a 300 hp petrol outboard of the latest model, increasing the potential range by 60%. The break-even period when comparing OXE 300 to a 300 hp pleasure craft petrol outboard varies between 500 and 1000 hours, based on purchase of the products and fuel cost alone. Taking into account that the OXE 300 also has longer operational life span, less cost for maintenance and increased safety, this break-even period is reduced further, increasing the financial gains for the operator.

The OXE 300 delivers 300 hp on the propeller shaft and meets the latest required emission standards. It reduces carbon dioxide by more than 35%, carbon monoxide by more than 99% and combined hydrocarbons and NOx by more than 70%, compared to petrol outboard standards (EPA-Tier 3, RCD SI-Outboard and CARB 3 star).

“With our motivated and dedicated design and verification teams we have been able to deliver a pre-production engine, ready to be displayed and tested on the water at the Genoa Boat Show, 5 months before planned market launch,” says Per Wigren, Chief Technology Officer at Cimco Marine AB.