Cornwall's Only Traditional Chocolatier Is a True Inventor 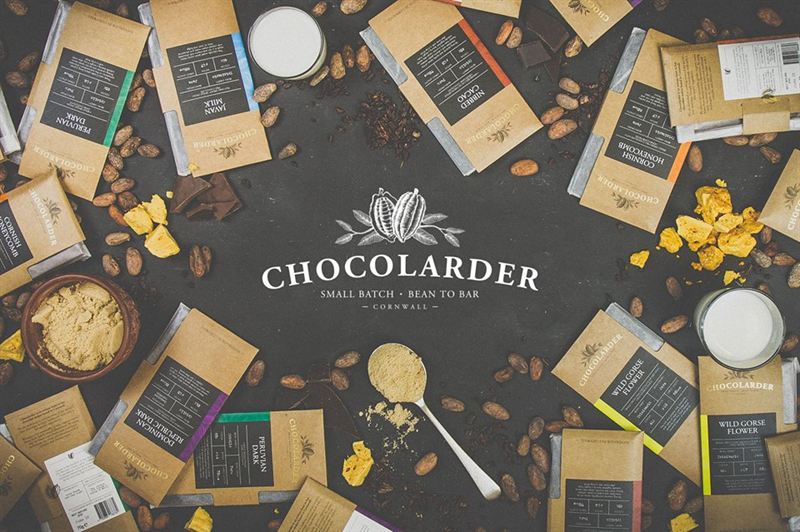 Chocolarder have been making artisan bean to bar chocolate for 3 years in Cornwall. From machinery to recipes: their founder is a true innovator

Real chocolatiers are hard to come by. Many companies exist who melt down some high quality chocolate buttons to create their own blends, add some flavours and a signature shape and call themselves chocolatiers. In a secret location in Cornwall, the Chocolarder has been experimenting with flavor combinations, winnowing, roasting and grinding real beans to create chocolate perfection.

Being a peninsula, Cornwall is surrounded by an abundance of seafood; from Falmouth's celebrated oysters to the mussels lining the rocks of the Helford and other estuaries across the county. Hayle, with expansive salt flats offers marsh samphire and razor clams, where most seaside towns grow rock samphire and sea spinach which bypass tourists and many locals. It's a county known, amongst chefs, for its provenance.

A chef who turned his hand from Michelin star pastry chefing to manufacturing Cornwall's only bean to bar chocolate is takes pride in the county's prolific produce. Having previously invented a signature chocolate dish of a chemically tricky chocolate steam, the creator of Chocolarder is nothing short of fanatical about real chocolate. One of only 7 producers of authentic, bean-to-bar chocolate in the UK, Chocolarder grind beans using machinery invented on site, and forage ingredients from Cornish hedgerows to experiment with flavour.

With organic beans being imported from single estate, family run plantations in Venezuela, Java, Madagascar, Peru and the Dominican Republic, every step of the Chocolarder process is ethical and sustainable. Having found that his profession is so niche, Mike Longman had to basically invent his own machinery to handle his beans. Using such curios as a car jack, his team hand-make bars from entirely organic ingredients. The only additions come from the flora and fauna on the country's most southerly tip. By fauna: read bees. They're leaving whale flavoured edibles to Iceland.

Although many producers don’t make real honeycomb these days, the Cornish Honeycomb milk bar uses traditionally made honeycomb; with honey gathered from bees who feast on the Lizard peninsula's wild heather, gorse and clover. Similarly, their Wild Gorse Flower bar uses handpicked gorse from the tops of cliffs overlooking Kynance's mineral rich serpentine cliffs. Imparting the delicious scent and delicate taste of coconut, the flavours are complex and changing.

Founder of Chocolarder and economics graduate, Michael Longman, explained that he has become an inventor, not just with flavour combinations, but also machinery. He said "Nobody produces equipment on this small a scale, so the machinery any small-scale chocolatier uses is amalgamated from other apparatus. For example, the grinder I’m using at the moment was an India Dosa batter grinder originally. Whilst it does the job brilliantly; the motor that was in it was only made to run for 4 hours, so I had to replace that. The wheels were made of a softer stone, like limestone, so I had to replace them with Cornish granite.”

To find out more about Chocolarder, please visit their website at http://www.chocolarder.com/