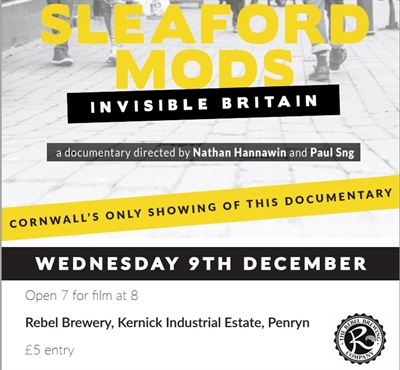 Firm fans of spoken word and the focus on Invisible Britain, The Rebel Brewery are opening their refurbished doors for Cornwall’s only showing of the Sleaford Mods’ documentary Invisible Britain.

Penryn’s Rebel Brewing Co have laid their malty hands on a copy of the long awaited Sleaford Mods’ Invisible Britain film. Documenting how the communities and people of Britain responded to austerity measures in the run up to this year’s election. The film also follows media darlings Sleaford Mods as they tour the country, visiting the boarded up and broken down places, often hidden from view.

Set within an industrial estate, The Rebel Brewery is an apt location for Cornwall’s only showing of this important documentary. Having just celebrated winning the Supreme Champion Beer award for their 80 Shilling ale, Rebel are refurbishing the brewery in preparation for upped production. The showing of the film will herald in the new look shop, bar and tour space housed within the brewery at Kernick Industrial Estate, Penryn.

Of this news, film maker Paul Sng said, “We decided to show the film in both cinemas and non-film related venues, so that people would have an opportunity to see the documentary in different environments. We also wanted to work with local businesses and individuals within communities, in keeping with the issues the film examines. Rebel Brewing Company was an obvious choice once Rebel approached us.”

Following the installation of their new brew kit back in the spring this year, Rebel have been producing somewhere in the region of 18,000 pints a week of their high quality craft ales from Cornwall. Founder of the company, Rob Lowe said, “Rebel have enjoyed hosting different events at the brewery and we are really excited to be showing Cornwall’s only viewing of this look at broken Britain. We are also big fans of the Sleaford Mods, so it’s a win to get the film down here.”

Expected to be popular with students, Rebel launched The Rebel Club this year. Members can receive up to 10% off Rebel’s beers, even at the student bar and various other goodies by signing up to Cornwall’s first brewery member’s club. More details of this can be found at www.rebelbrewing.co.uk

When: Wednesday 9th December. Doors open at 7 for 8 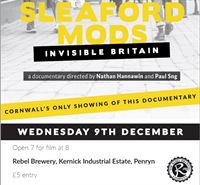