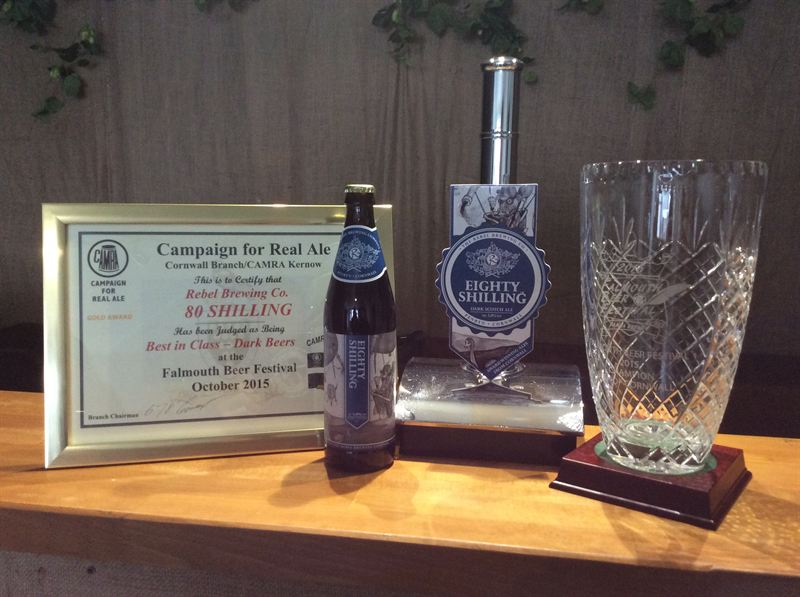 As Falmouth’s hangovers after its annual ale festival, one brewery are still rising high after their third win in as many years.

Penryn’s Rebel Brewing Co celebrated this week as their brewery scooped another Supreme Champion Beer award from CAMRA Kernow at the Falmouth Beer Festival. Out of over 200 beers exhibited at the festival, the malty and caramel flavours of Rebel’s 80 Shilling took judges by storm and won the award for the second consecutive year.

Overall, Rebel have won Supreme Champion Beer awards for the last 3 years, making them the only brewery to have ever won three years in a row. “This is a testament to our commitment to consistency and providing great tasting ales”, said founder of the brewery Rob Lowe.

80 Shilling is a Celtic beer which is dark with a red eclipse when held in the light. It is characterised by a roasted malty smell and the taste of coffee and black treacle. IT has a sweetness not always associated with this style of beer. The taste of hops is still prevalent through the beer.

CAMRA is an entirely voluntary run organisation, and as such this means the judging is completely impartial. For the third year in a row, a Rebel beer was selected as the best Cornwall has to offer, which is a strong accolade; given the quality of Cornish brews.

Brewer Matt Pascoe said, “The beer festival is a great time of year. It’s great to get the chance to see what other brewers have been creating. Winning the award for the third consecutive year gives me confidence that we are in tune with customer tastes. It’s brilliant news.”

Following the installation of a new brew kit back in the spring this year, Rebel have been producing somewhere in the region of 18,000 pints a week of their high quality craft ales from Cornwall. In anticipation of the festival, they ensured that an excess amount of their most popular beers were in stock and ready to go, and have seen an increase in visitors to their shop on Kernick Industrial Estate, following the beer festival.

Members of The Rebel Club can receive up to 10% off Rebel’s beers and various other goodies by signing up to Cornwall’s first brewery member’s club. More details of this can be found at www.rebelbrewing.co.uk