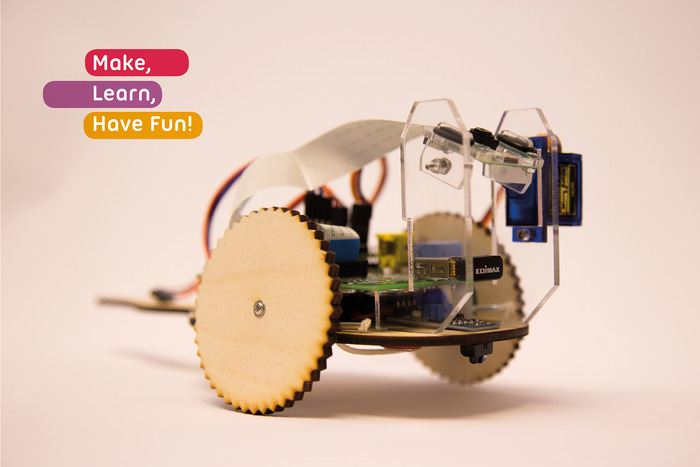 Bristol based designers Agilic bring young creators into the digital age with the Tiddlybot - a robot which bestows a range of investigative skills on its user.

Developed to help young people learn about robotics, programming the Tiddlybot was recently launched on Kickstarter. The tiddlyBot is based on the lowcost Raspberry Pi mini-computer and allows users to turn a Raspberry Pi into a fun little robot.  The famous little robot from developers Agilic; featured in Broadsheets from The Times to The Huffington Post; can draw, follow lines, output a live wireless video feed and be controlled from a web interface, from a smart phone, tablet or any other PC with a browser.

In a time where learning to learn has never been more relevant, the Tiddlybot encourages development of such learning skills as problem solving, programming and the basics of robotics; something which the next generation will need to understand in the way that the current children of the 70s and 80s embraced computers. Able to follow pre-drawn lines, tiddlybot can be a 'good little robot' by demonstrating this true autonomous behaviour.  In addition it can draw lines, which can again either be pre programmed or - and this is the fun bit - freestyle!

With a developing team made up of students spanning two continents, the spokesman for Tiddlybot, Harry Gee said, "we've been working hard to create something to engage and empower the next generation of engineers, programmers and scientists and we think Tiddlybot is fantastic at focusing all types of learners." Children find it easy to use and fun to play with; as do adults. The driving force behind its creation was empowering our future generations with some of the fundamentals of programming, whilst supporting the learning of  Python and Javascript for more advanced students.

The team has taken care to integrate efficient power conversion to allow the batteries to last for longer and there's also an option for onboard battery charging for minimising fuss. Both hardware and software used for the project were designed to be simple and straightforward to use, building confidence with robotics and engineering for learners. With starting pledges to attend a robot making workshop starting at just $15, the Tiddlybot offers a cost effective way to develop young people's minds in an wide range of areas. To purchase a build-your-own version, pledgers are asked for $44 or to own just the interface $37, so there's an option available for every budget.

'Tiddles', as the company affectionately refer to it, comes in a range of colours as well as a wood version; made from sustainable plywood. The Kickstarter campaign seeks to fund research into the many ways the Tiddlybot, and other Raspberry Pi bots can be adapted and applied to enhance the learning of Science, Technology, Engineering and Maths (STEM).

To pledge to fund this innovative and future thinking technology, please visit the Kickstarter campaign and see the video at https://www.kickstarter.com/projects/1320310506/tiddlybot-fun-and-simple-raspberry-pi-robot

Agilic is an international company; spanning the continents of America and Europe and comprises of a team of enthusiastic scientists, designers and robotics experts who make robots to empower people.