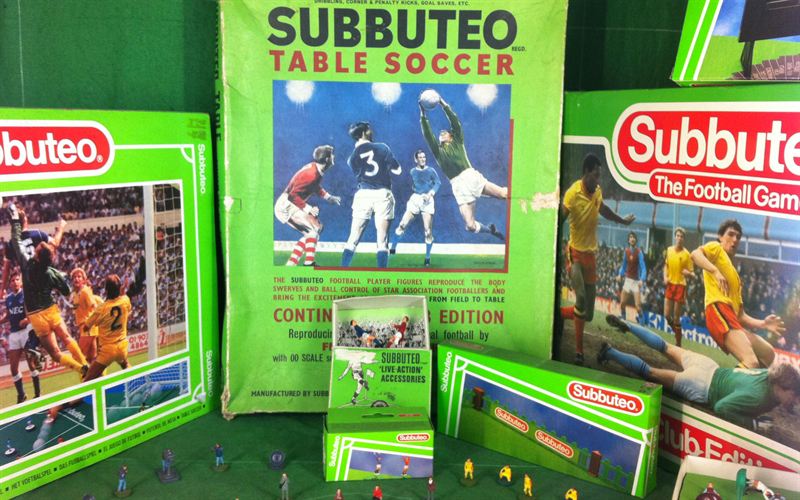 Says David: ‘Long before Football Manager, fantasy football and FIFA World Cup, Subbuteo ruled the world of football gaming. Kids would rush down to the shops with their pocket money to buy a new team, and accessories such as floodlights and stands, to create a whole stadium to play matches in. Now collectors are looking back with nostalgia to those days, and are beginning to pay Premiership prices to recreate the excitement.’

Explains David: ‘Of course Subbuteo is still available and great fun for today’s kids; but for many people the original 1960’s and 1970’s figures, wearing those fondly remembered strips, are becoming increasingly collectable.’

Some Subbuteo sets in their original packaging are now reaching £350 on eBay, with rare individual teams scoring around £180 while a super-rare mint condition French Laval 249 Delacoste set was recently on eBay for £875.

For less exotic items prices have large remained in the lower division, says David, but he believes these too are poised to rise in value. ‘Subbuteo first kicked off in the 1940s and the colourful early card or celluloid flat figures are still available for around £20 or so. I advise collectors to snap them up while the transfer window is still open! Amazingly, many 1960’s and 70’s plastic teams - termed 'heavyweight' sets - can also still be bought from as little as £20 mint and boxed; but there are strong signs those prices are on the rise. To celebrate Bournemouth’s promotion I’ve just bought a 1970’s boxed set for £40 and I’ll be holding on to it. The early 60’s Tottenham set is now fetching over £60 and if you want to buy Partick Thistle or one of the rarer 1970’s Man. City versions you are already looking at £120.’

Concludes David: ‘If you have an old set in your loft or gathering dust in your parents' attic, it’s time to consider selling them online. Subbuteo figures are nostalgic and attractive and bring a whole new meaning to the beautiful game. The fact they are compact also means they are easily mailed; a useful thing to consider for ParcelHero’s many customers selling on eBay and other marketplaces. Your own team can’t always be winners; but after a long time languishing Subbuteo prices are on the rise. It’s definitely a game of two halves!’

For more information about other footballing collectables and the best way to ship them safely see https://www.parcelhero.com/blog/general/collecting-the-beautiful-game