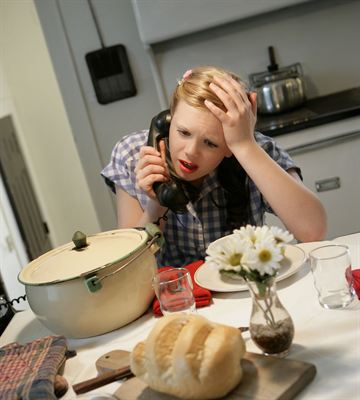 International courier ParcelHero looks at how Mum would have spent her day back in 1965.

Terry cloth nappies, fastened with large safety pins, were by far the main type of nappy in 1965; leaving Mum the gory task of scrubbing and washing baby’s best efforts in her Rolls Razor Twin Tub. By the end of the 1960s Pampers disposables had become hugely popular – one of the fastest switches in consumer buying patterns ever. We wonder why?

Slaving over a stove

With no ready-meals or microwaves, Mum spent much of her time cooking. Meat and veg was the staple meal, with take-away fish n’ chips a weekly treat. ‘Instant’ food was limited to Spam and other tinned items. Mum didn’t launch into spaghetti bolognaise or prawn cocktails until the 1970s.

Much of Mum’s time was spent shopping. In 1963 only 3% of UK homes had freezers. She probably visited the corner shop and the grocer daily; and the local butcher, the fishmonger and baker more than once a week.  There were only 572 supermarkets in the UK in 1961. By 1969 there were 3,400 including Gateway, Fine Fare, Tesco and Sainsbury. Thrifty Mum was careful to collect her Green Shield Stamps.

NOT going to work…

Most women either chose to give up work or were ‘let go’ when pregnant! In 1960 only 35% of married women worked at all, and most chose to give up work when they had babies. It was still legal to sack someone who was pregnant until 1975. Only 17 percent of moms who worked during pregnancy in 1961 went back to work before their children were five, compared to 65 percent of women today.

Leaving kids in front of the TV – but only for 15 minutes!

There was no all-day TV and no DVDs, so Mom looked forward to 1.30pm when, despite its name, she could leave the kids to view Watch with Mother on their own while she enjoyed a rare break. Andy Pandy and The Flower Pot Men were great for keeping toddlers entertained. For older kids Doctor Who was already a Saturday favourite and Thunderbirds proved to be a F.A.B. hit from lift-off in 1965.

Not doing much for Mother’s Day!

Poor Mum wasn’t likely to receive a Mother’s Day gift from her grown-up kids. There were no courier services to pick up the parcel from the senders’ door, no choice but Royal Mail’s prices, and definitely no Sunday delivery! Few families ever went out to a restaurant or drank wine, so no big celebrations. It wasn’t until the arrival of Bernie Inns and Mateus Rose, Black Tower and Blue Nun in the 1970s that eating out and enjoying a glass or two became popular.

Heavy metal Pedigree prams were still most popular for babies, their basic design hadn’t changed much since the Edwardian era. They needed a hefty push to climb kerbs, and forget getting them on a bus – especially as lowfloor buses weren’t introduced until the 1990s.

Half of all women smoked in the 1960s, compared to 1 in 5 today. It wasn’t until 1964 that the first major report into smoking health issues appeared. Women continued to smoke during pregnancy and, if they were anaemic, doctors would also often prescribe them free Guinness on the NHS!

Collapsing in front of Corrie!

Busy Mum picked up her kids from school in her shiny new Mini, Fiat 500 or Beetle, helped with homework, fed them Birds-Eye Fish Fingers, kept them amused with Thomas the Tank Engine, Barbie and Batman toys, before she finally collapsed in front of Coronation Street, complaining Dad didn’t help out much. How times have changed… Or maybe not!

Says ParcelHero’s Head of Public Relations, David Jinks: ‘Mums certainly had it tough 50 years ago, and, despite modern conveniences, it’s still massively hard work for today’s mothers, and they are probably holding down a career too! Mum deserves a treat so, rather than sending parcels, we’re sending one lucky mother and her guest on a pampering £400 spa visit. She can choose from a wealth of luxurious Wahanda spa venues, with indulgent treatments, breakfast, bubbles and dinner.’

David explains: ‘Entering our #senditwithlove Mother’s Day competition is simple. Just visit the ParcelHero Facebook page and tell us why your mum deserves her spa break. What’s the most wonderful thing she has done for you? In what way is she the Queen of Mums? We’d love to hear. For full details visit http://www.parcelhero.com/competitions/mothers-day 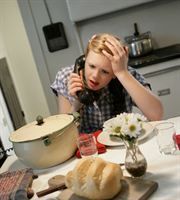