The first kids AR-game in a grocery store

Today, Coop and Peppy Pals announce the launch of an in-store Augmented Reality (AR) game for kids. Paired with the latest navigation technology, the app takes kids on a recipe scavenger hunt in selected stores making it the first mixed reality game ever played in a grocery store.

“The goal is to make it more inclusive and fun for kids and families to shop and cook food together”, says Paulina Olsson, CEO of Peppy Pals.

By using state of the art AR-integrations, kids get the feeling that Peppy Pals' animal characters are guiding them through the store and help them find ingredients to a selected recipe.

"This is a customer experience that we strongly believe in where we’ve created an adventure that both adults and children will appreciate. Together with Peppy Pals, we’ve designed a platform where adults and kids can meet in everyday routines. The adults are given the opportunity to manage daily tasks such as grocery shopping while the younger family members have the opportunity to influence the family's meal planning in a fun way. With this launch, we’ve really taken the customer experience to the next level", says Henrik Staaf, Digital Product Manager at Coop.

The app will go live in a number of selected stores in Sweden as part of a pilot program initiated by Coop’s newly established innovation lab called Testlabbet. The AR-game can be played by both adults and children in Stora Coop Tumba upon launch and Stora Coop Åkersberga and Stora Coop Bromma shortly thereafter. If the pilot goes well, the goal is to offer the AR-experience in more Coop stores across the country.

"Grocery shopping and deciding what to eat for dinner can sometimes feel stressful for families. With the help of this AR-game, the stress is replaced by playfulness and laughter. It’s been a really fun game to work on where we’ve had to challenge ourselves with how the latest AR- and navigation technology can be used to help simplify a family’s daily routine of grocery shopping. We’re really looking forward to hearing kids and adults response and how we can improve the experience further", says Paulina Olsson, CEO of Peppy Pals.

The app is available on the Swedish iOS AppStore upon launch and Android shortly thereafter. It offers a number of child-friendly recipes developed by Coop.

Peppy Pals is the leading creator of playful and digital experiences for lifelong, social and emotional learning (EQ/SEL). The award-winning, language-free apps, books, movies, toys and activities designed for children ages 2-6 have proven to be effective in both homes and schools worldwide, By using storytelling and humor, Peppy Pals unique way of learning sparks conversations between kids and adults on important social and emotional skills such as empathy, emotions, self-esteem and problem-solving.

Coop is one of Sweden's largest grocery chains with just over 817 stores from Katterjåkk in the North to Smygehamn in the South. Since 2008, Coop has offered online retail. Their store on coop.se reaches just over 60 percent of the Swedish households with home deliveries. Coop is ranked as Sweden's most sustainable food chain and has the highest percentage of organic sales in the industry. In total, Coop has sales of SEK 43 billion in Sweden and has over 22,000 employees. 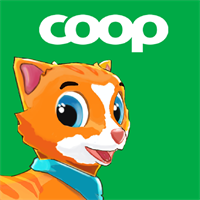