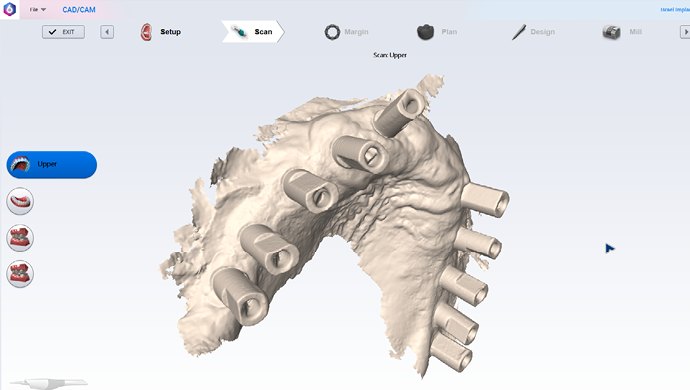 Taking digital impressions of the soft tissues of the mouth can be challenging – but not if you are using Planmeca Emerald™ intraoral scanners. The following case report by Dr Koby Sharvit illustrates how intraoral scans, captured of the mucosa in full natural colours, can help designing advanced dental restorations quickly and accurately.

Dr Koby Sharvit, MD, DMD, is an Israeli dentist and expert in CAD/CAM technology. He is currently working in PerioCenter Ltd. A dental centre, managed by Dr Yaniv Mayer and Dr Eran Gabay, both specialists in periodontology. The clinic is located in Haifa, Israel.

Dr Sharvit was approached by a patient who needed dental restorations for the entire upper jaw. The patient, a 45-year-old woman, had lost all her upper teeth due to an advanced periodontal disease. She had previously undergone dental surgery conducted by Dr Yaniv Mayer, who performed two open maxillary sinus augmentations with the installation of ten Alpha-Bio implants with 3.75mm diameter, which were placed to the maxilla.

As the patient suffers from a prominent gag reflex, she did not want to use a temporary denture for the healing period. A year after the implant placement, it was time for the restoration design. 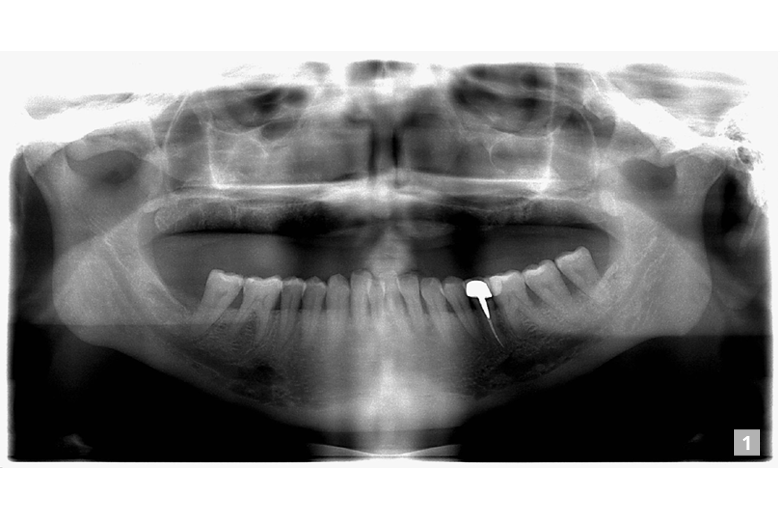 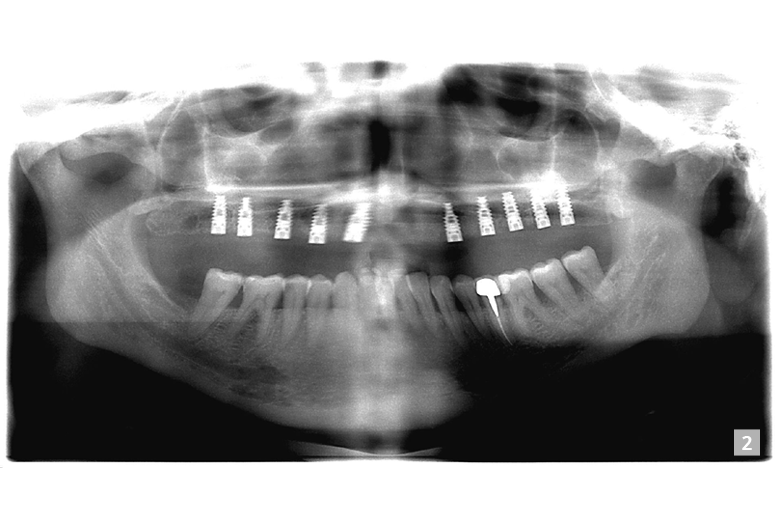 Fig. 1.–2. Patient had previously had ten dental implants placed to the upper jaw.

Due to the patient’s gag reflex and high-level of anxiety, Dr Sharvit suggested taking digital impressions of the mouth with the Planmeca Emerald™ S intraoral scanner. With the scanner, Dr Sharvit could easily capture the patient’s mucosa and available dentition for the design of an implant-supported full-arch dental bridge. Compared to traditional impressions, intraoral scanning would be much more comfortable and faster for the patient. 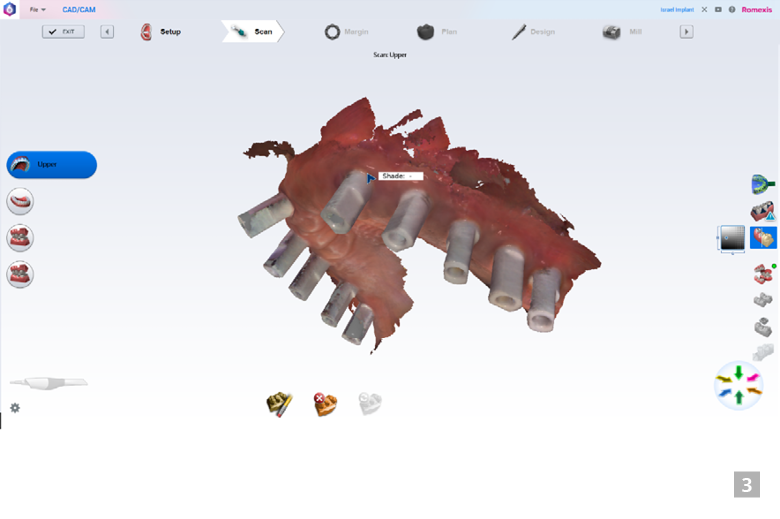 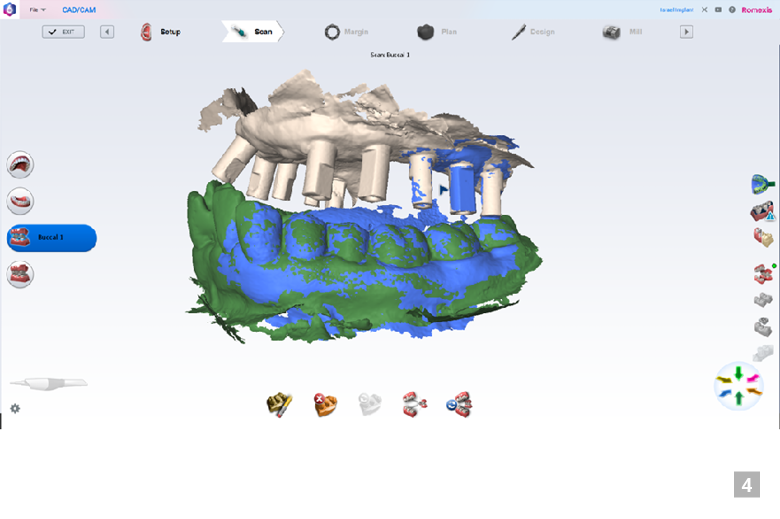 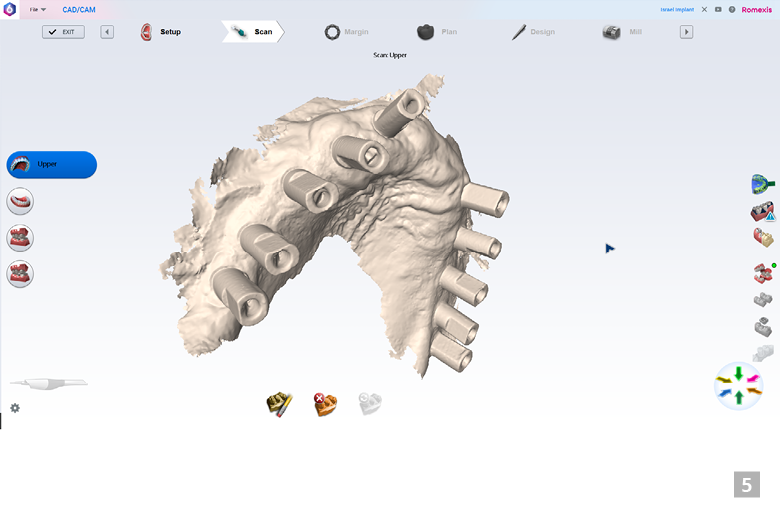 Thanks to the latest update of Planmeca Romexis® and Planmeca PlanCAD® Easy software, the scanning procedure was easy and smooth. With the new global alignment feature of the software, the scanning pattern can be chosen more freely, and the most scanning errors are automatically corrected. Even in this challenging case, the scan result was excellent, and a dental technician was able to start working with the model right away.

With the open system of Planmeca, dental professionals can choose their preferred way of working and, for example, easily export scan data to third-party software or to external partners. For the restoration design of this case, the dental technician Shimon Shoval, CDT, the CEO of Smile Tech Dental Laboratory in Israel, exported the scan data to the lab's dental CAD software and built a zirconia bridge using a virtual Hanau articulator. 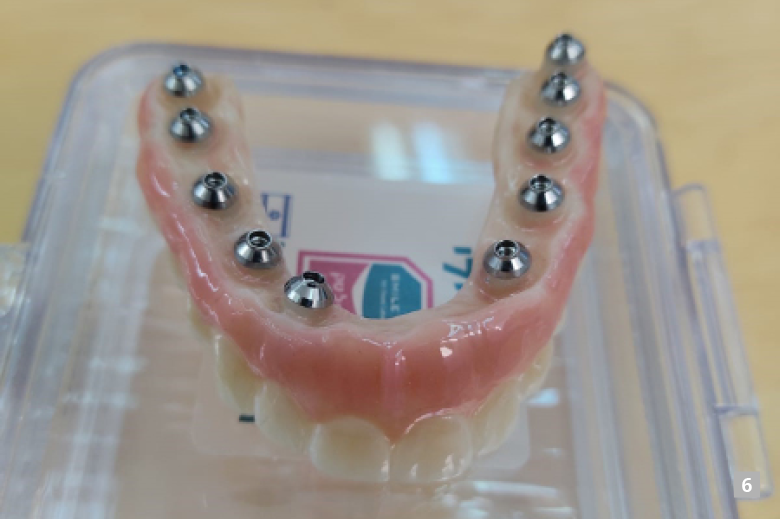 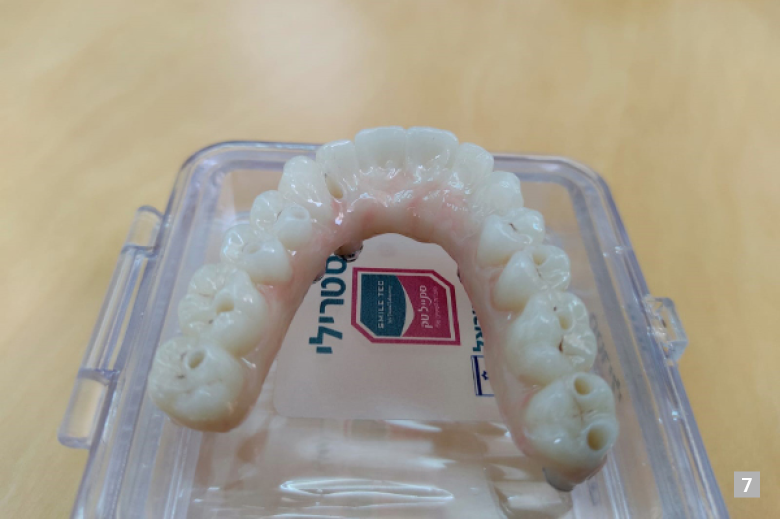 Fig. 6.–7. Implant-supported dental bridge was designed based on the scanned model.

A week after the first appointment, the bridge was delivered to the patient. Some minor occlusal adjustments were performed during the delivery, but the fit of the bridge itself was very good and did not require any adjustments.

The patient started eating solid food already within a couple of days after the restoration was placed. With the dental bridge, her phonetics and aesthetics were fully restored. 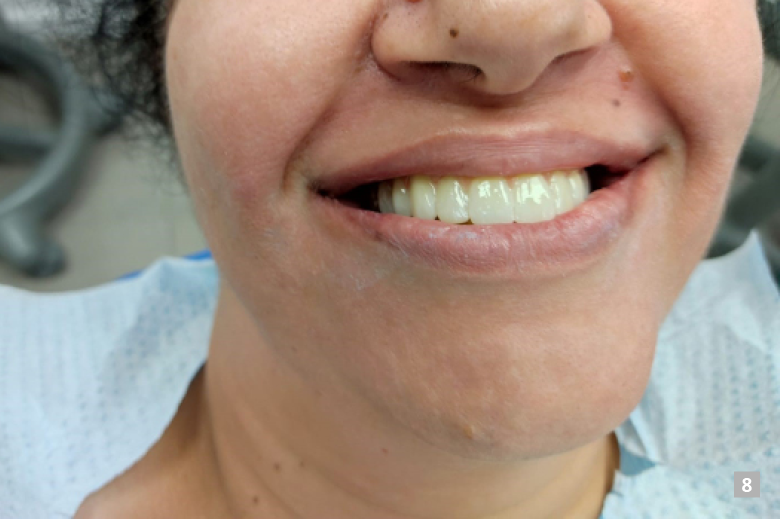 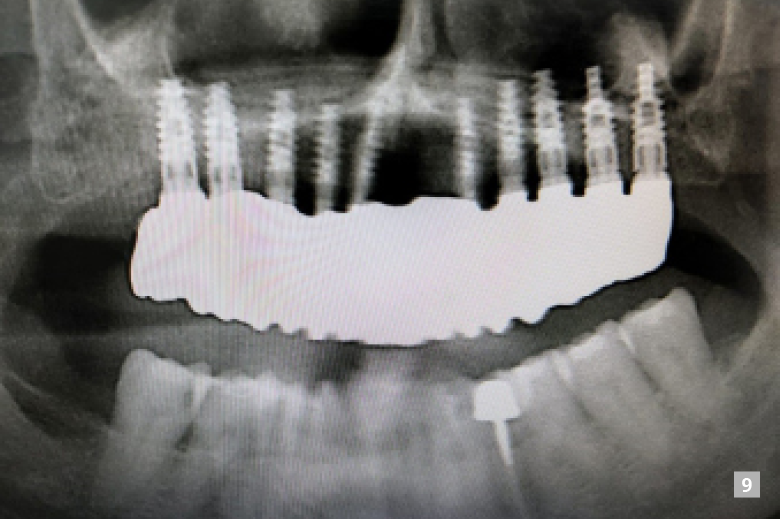 Fig. 8–9. The aesthetics and phonetics of the patient were restored with the perfectly fitting restoration.

Dr Koby Sharvit graduated as Doctor of Medicine from Technion, Israel Institute of Technology, in 1991 and received the degree of Doctor of Medicine in Dentistry from Tel Aviv University in 1996. He is currently working with complex prosthetic dental cases in the Periocenter dental clinic in Haifa, Israel. Expert in utilising CAD/CAM technology, he also works as a CAD/CAM specialist at Avidor Medical Dental Equipment Ltd.

Planmeca Oy and Planmeca Group
Planmeca Oy is one of the world's leading dental equipment manufacturers with a product range covering digital dental units, CAD/CAM solutions, world-class 2D and 3D imaging devices and comprehensive software solutions. Headquartered in Helsinki, Finland, Planmeca’s products are distributed in over 120 countries worldwide. With a strong commitment to pioneering innovations and design, it is the largest privately held company in its field. Planmeca Oy is part of the Finnish Planmeca Group, which operates in the field of healthcare technology. The Group's turnover in 2019 was MEUR 769, and it employs nearly 2,900 people worldwide.
www.planmeca.com