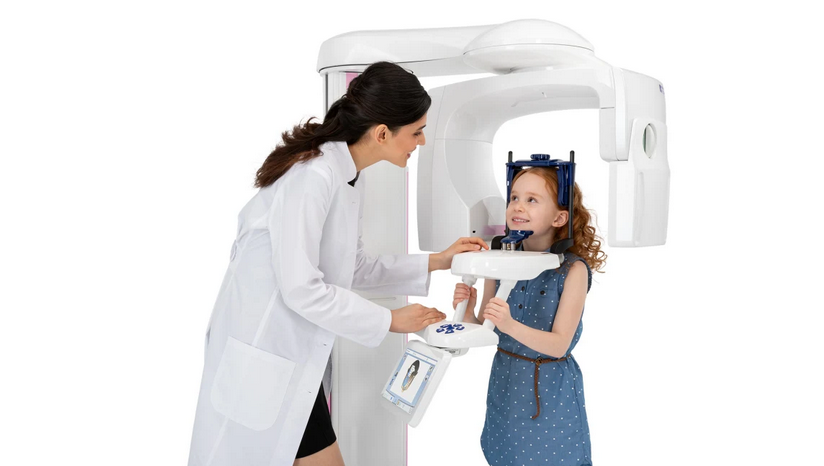 Planmeca has developed smart technologies that help decrease the amount of radiation required to produce medical images without compromising the diagnostic quality of the images. The algorithms developed for 3D imaging help produce more detailed images and diagnostics than ever before.

Low-dose imaging is beneficial for any patient, but it is particularly significant for children, as a child’s body has comparably more radiation-sensitive red bone marrow than the body of an adult.

When new scientific studies on the subject were published around a decade ago, Planmeca began to develop its own dose measurement solutions. Planmeca believed that these solutions could help decrease ionising radiation doses in medical imaging.

Juha Koivisto, Planmeca’s Chief Physicist and a long-time employee, decided to write his doctoral dissertation on the subject at the University of Helsinki.

– We noticed during our research that we could decrease the radiation dose without affecting the diagnostic quality of our images. When we compared our low-dose imaging solution to traditional methods used in the field, we discovered that the radiation dose could be reduced by 77%, says Koivisto.

Using a dosimeter to observe how radiation is formed

Planmeca Ultra Low Dose is a smart, algorithm-based low-dose imaging protocol that was launched in 2014. Before the company could develop the new product, it first needed to create a real-time dosimeter. The device allows the company’s researchers to observe how a radiation dose is formed.

– The dosimeter includes a patient model called a phantom, which has sensors that measure radiation doses. When a phantom is exposed to a radiation beam produced by a CBCT unit or another X-ray device, these sensors measure residual dose levels in tissues in order to derive effective doses. This allows us to gain an understanding of the organs the beam reaches and the makeup of the effective dose in the head region. Different organs have different weighting factors, notes Juha Koivisto.

– For example, bone marrow, which is renewed at the fastest rate, has the largest weighting factor. If it is exposed to radiation, the effective dose is larger than a dose that is aimed at skin or the brain, Koivisto continues.

The dosimeter was used to review every imaging protocol used by Planmeca.

Diagnostic requirements determine the area, precision and radiation dose of an image

With Planmeca’s devices, dentists and radiologists can now base the right imaging protocols and radiation doses on each patient’s diagnostic needs. Professionals in the field usually have a good understanding of the radiation doses required to achieve images of a certain quality. The Finnish Radiation Act mandates that a patient should not be subjected to more than the minimum amount of radiation necessary for the diagnosis in question.

– If, for example, one wants to diagnose a patient’s frontal or maxillary sinuses, a smaller radiation dose is usually enough to obtain a sufficiently detailed image, notes Koivisto.

Implant or root area treatments require more enhanced and detailed 3D images, and the imaging of these smaller regions often requires larger radiation doses. However, the jaw area images used as part of orthodontic treatments usually require images of a lower resolution and a smaller radiation dose.Planmeca’s devices can capture images of a 10 X 10 cm area with a radiation dose as low as 12 microsieverts. Physicians can lower the dose by, for example, limiting the size of the volume or by decreasing the imaging values used, i.e. by changing the quality of the image. In practice, the low dose imaging process has been made to be as quick and easy as possible – all you need to do is press a green button. 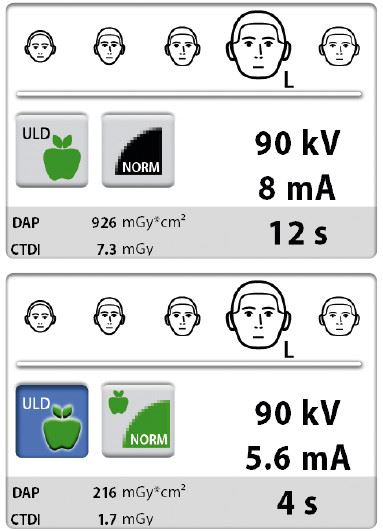 The goal is to decrease cumulative radiation exposure in the populace

Juha Koivisto explains that the statistical risk of radiation is very small for an individual, but this figure can still be significant at the wider population level.

– We want to further decrease the cumulative risk that radiation poses to the populace and we can achieve this by decreasing the radiation doses of our devices to a level that is as low as possible, he notes.

Planmeca’s devices can capture a medical 3D image with a dose as low as 12 microsieverts, which is the equivalent of four days of background radiation in Finland.

Planmeca’s objective is to decrease the radiation doses of its devices even further, to the lowest levels possible, in accordance with the ethical standard of “as low as diagnostically acceptable” (ALADA). This principle is part of Planmeca’s ethical imaging philosophy.

– Even though an individual patient is not subjected to any great risks when an image is captured of their head region, on a wider scale this can become a national health issue, which is why it is advisable to further decrease radiation doses, Juha Koivisto says.

The European Commission drafts evidence-based guidelines on which imaging protocols are to be used for different cases, and it also publishes the average radiation dose values used in medical imaging.

Antti Airisto, an Area Export Manager at Planmeca, explains that these policies inspire a great deal of debate among professionals in the field. Today, medical images are acquired using both 2D and 3D imaging devices, which also affects the average values.

There has also been discussion, for example, surrounding the use of 3D imaging for wisdom tooth removal cases. Among other things, 3D images can help reveal cases where the root of a patient’s tooth is tangled around a nerve canal.

– If this is not known, the nerve canal could be damaged during the removal of the tooth, which could potentially result in a state of paralysis, Airisto explains.

A counterargument to this would be that a detailed 3D image might be useful in just a handful of cases, and that this is not a valid reason for increasing the national cumulative radiation dose levels.

– However, the average dose of a specific X-ray volume may currently be notably higher than Planmeca’s recommendation for e.g. wisdom tooth removal cases, notes Airisto.

When comparing 2D and 3D images to one another, one can concretely see the information that a 2D image cannot capture. Antti Airisto compares images of a patient who has been kicked in the head by a horse.

– In the 2D image, you can see how the crown of the tooth has been chipped and the maxillary sinuses are asymmetrical, which could indicate bleeding, Airisto says.

– All this provides physicians with much more information on whether the tooth can be saved and what other types of corrective measures are needed. If a bone has been shattered, they can replace it with artificial bone and continue the process later with implant treatments, Airisto explains.

– One image can show you the amount of bone present. This information can be used to estimate the required size of the implant. It also reveals the condition of the bone, which will determine the permanence of the implant and the possible need for artificial bone. In addition, the image helps locate the mandibular nerve, which is key information for planning any treatments, Airisto notes.

Planmeca’s algorithms function on three different levels: in the imaging unit itself, in 3D image rendering, and in the software.– A 3D image is constructed from a few hundred 2D images. When the imaging arm rotates around the patient, it generates pulsated X-ray beams with each pulse producing a single 2D image. This image data, i.e. the numerous 2D slices, are transferred into a computer where an algorithm calculates their three-dimensional volume. This reconstruction process has been developed by Planmeca, Antti Airisto says. 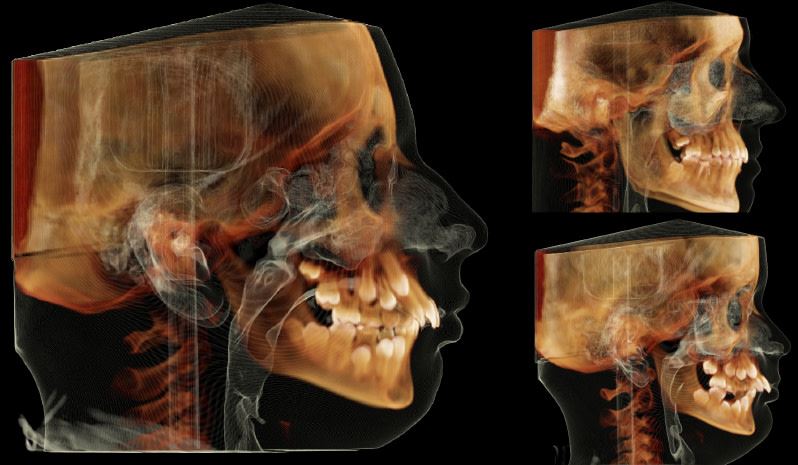 The company has also developed algorithms to correct the image that is generated during the imaging process.

– The initial image can include streaks and shadows that are caused by implants, root treatments, braces and all denser materials. We can fix all of these in the final image, Airisto continues.

According to Airisto, the greatest algorithm-related breakthrough has been a correction algorithm for latent patient movement.

– Even the smallest movement can decrease the quality of an image, but with the help of our algorithm, we can remove the negative effects these movements have on the image, Airisto explains.

This algorithm is particularly useful when imaging small children. However, the issue of movement is widespread in the field of imaging overall, as studies have shown that over 40% of patients tend to move during the imaging process. Previously, the image needed to be captured again, but now it can be corrected.

According to Planmeca’s Vice President of Marketing and Communications, Maarit Vannas, this algorithm development work has been key in the company's ability to leap ahead of its competitors. She explains that these types of algorithms are extremely difficult to copy, as they are the result of in-depth product development expertise.

The next step in Planmeca’s product development is to further develop the company’s use of machine intelligence and applications related to it.

Planmeca has extensively developed its devices and the Romexis software platform, which enables using 3D images for various treatments − from implant planning to maxillofacial surgery.

– Our software developers are constantly thinking of new ways to get everything we can out of 3D images, Antti Airisto explains.

The company’s mechanical and electronics design process is also key to ensuring that everything works together. The process is focused on enabling the most versatile imaging geometry possible.

– Planmeca’s devices are built on previous models, and we can update our older 2D devices to 3D devices. We can also add new features to our older existing models with software upgrades, Airisto notes.

In many regional markets, the market share of 3D imaging devices is still relatively small.

– The most rapid increase in the use of 3D imaging is taking place in China, largely due to the fact that the country skipped the digital 2D imaging phase altogether. The French state has begun to subsidise the digitalisation and renewal of older devices and the adoption of 3D imaging. In the United States, a great number of clinics still rely on 2D devices, Maarit Vannas concludes.

A version of this article was originally published in Finnish by Bonnier Business Forum Oy.