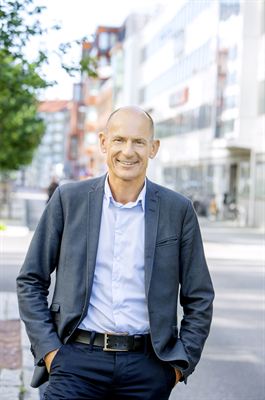 The shareholders in Platzer Fastigheter Holding AB (publ), corporate identity no. 556746-6437, are invited to attend the Annual General Meeting on Thursday, 27 April 2017 at 15.00 pm in Studenternas hus, Götabergsgatan 17 in Gothenburg.

You have the right to attend and vote at the Annual General Meeting of Platzer Fastigheter Holding AB if you are entered in the shareholder register maintained by Euroclear Sweden AB on 21 April 2017 and have notified the company of your intention to attend the Meeting no later than 21 April 2017, preferably before 16:00. Send your registration by post to Platzer Fastigheter Holding AB, attention: Agneta Timhagen Meier, Box 211, 401 23 Gothenburg, Sweden, or call +46 (0)31 – 63 12 00 or send an email to agneta.meier@platzer.se, or register via the company's website platzer.se. The registration should include the shareholder's name, personal identity number/company registration number, address, telephone number and shareholding as well as the name(s) of any assistants (no more than two).

Shareholders who are represented by a proxy/proxies must issue a written, dated form of proxy. Forms of proxy can be downloaded from the company's website platzer.se. If the form of proxy is issued by a legal entity, a signed copy of the entity's certificate of incorporation or equivalent authentication document is also required. The original of the form of proxy, certificate of incorporation and other authorisation documents must be available at the Meeting and, to facilitate admission to the Meeting, should be sent to the company at the above address, ensuring they will be received not later than 21 April 2017. The form of proxy must not be more than one year old, unless it states that it is valid for a longer period, although this must not be more than five years.

Item 12             that the Board shall consist of six ordinary members without any deputy members.

that fees to the auditors shall be paid according to an approved invoice.

Item 14             that Fabian Hielte, Anders Jarl, Ricard Robbstål, Cecilia Marlow and Charlotte Hybinette shall be re-elected as members of the Board. Lena Apler has declined re-election. Furthermore, it is proposed to appoint as a new member:

Caroline Krensler, born 1967, is founder, partner and Deputy CEO of Vinngroup AB. Caroline has extensive entrepreneurial experience. Before setting up Vinngroup AB in 2008, Caroline was Director of Strategy and Head of Investor Relations at Semcon. Before that she studied Economics at the Gothenburg School of Business, Economics and Law at Gothenburg University, and Marketing in London, Montreal and Lyon. I her role at Vinngroup, Caroline is Chairman of the Board of the subsidiaries Provinn AB, Niotech AB, Case5 AB, Qing AB and Yovinn AB, and Board member of Goovinn AB, Eclipse optics AB, Eyevinn strategy AB and Creo Dynamics AB. Caroline is also a Board member of Västsvenska Handelskammaren (West Sweden Chamber of Commerce) in Gothenburg and Konsert Strateg6 & IP. Caroline owns 500 shares in Platzer.

Fabian Hielte is proposed for re-election as Chairman of the Board of Directors.

Item 15             that the public accounting firm PwC be re-appointed as the company's auditor until the close of the 2018 Annual General Meeting, with Bengt Kron as the Auditor in Charge.

Nomination Committee (Item 16 on the Agenda):

Dividend and record date (Item 10 on the Agenda)

Guidelines for remuneration of senior executives (Item 17 on the Agenda)

The Board of Directors is proposing that the Annual General Meeting approve the following guidelines, which are unchanged from the guidelines approved by the 2016 Annual General Meeting. Remuneration and other terms and conditions of employment for the company’s senior management must be on market terms and competitive, and must be based on the employee’s responsibilities and performance. Remuneration takes the form of a fixed salary for all members of the senior management. Pension terms and conditions must be on market terms and based on a defined-contribution pension or the ITP occupational pension scheme for white-collar workers.

In addition to a fixed salary, it should also be possible to offer variable remuneration to reward predetermined and measurable performance. Variable remuneration must not exceed an amount corresponding to three monthly salaries, or six monthly salaries for the CEO. Long-term variable incentive schemes should be share-based and performance-related, and the maximum commitment should be limited to annual salary.

Notice of termination, when given by the company, shall be up to 12 months. Severance pay, including salary during the notice period, must not exceed 12 monthly salaries.

Variable remuneration to senior executives in the company in 2016 amounted to approx. SEK 2.2 million.

The Board of Directors has the right to deviate from the guidelines in the event of special circumstances in individual cases.

The Board of Directors proposes that the Annual General Meeting resolves to authorise the Board of Directors to decide, by no later than the time of the next Annual General Meeting, on one or more occasions and with or without a preferential right for the shareholders, on a new issue of class B shares for a total value of no more than 10 percent of the share capital. The share issue may be made as a cash, non-cash or offset issue. Shares may only be issued at market price. The reason for departing from the preferential right for the shareholders is that the company, in the case of property transactions, may need prompt access to capital or, alternatively, need to pay with the company's shares. Furthermore, it is proposed that the Meeting authorise the Board of Directors and the CEO to make any minor adjustments to this resolution and take any action that may be necessary in connection with registration.

Please note that approval of the resolution is subject to the vote of shareholders with at least two thirds of both the votes cast and the shares represented at the meeting.

NUMBER OF SHARES AND VOTES

The total number of shares and votes in the company at the time this notice was issued was as follows:

The Nomination Committee’s full resolution proposals, reasoned statements and information about proposed Board members and auditors, together with associated documentation, are available from the company and on the company’s website, platzer.se. The annual report, consolidated financial statements, auditor’s report and auditor’s opinion, the Board of Directors’ full resolution proposals and associated reasoned statements pursuant to Chapter 18, Section 4 of the Swedish Companies Act, and the Board of Directors’ report on evaluation of remuneration and application of AGM guidelines on salaries and other remuneration for senior executives, as well as the auditor’s opinion pursuant to Chapter 8, Section 54 of the Swedish Companies Act will be made available to shareholders from the company three weeks before the AGM. The documents will also be published on the company’s website, platzer.se.

On request, the documents can also be sent by post to shareholders who provide their postal address. The documents will be presented at the Annual General Meeting.


INFORMATION AT THE MEETING

The shareholders are entitled to certain information at the Meeting. The Board of Directors and the CEO shall disclose information on matters that may affect the assessment of an item on the agenda, matters that may affect the assessment of the company's or a subsidiary's financial situation or the company's relationship with another Group company if requested to do so by a shareholder and if the Board of Directors is of the opinion that it will not cause any material harm to the company.

The information in this press release is information that Platzer Fastigheter Holding AB (publ) is legally obliged to disclose in accordance with the Swedish Financial Instruments Trading Act. The information was released for publication at 15:00 CET tu 28 March 2017.

Platzer Fastigheter Holding AB (publ) owns and develops commercial properties in the Gothenburg area comprising a total lettable area of around 800,000 sq. m. and with a value of around SEK 13.4 billion. Platzer is listed on NASDAQ OMX Stockholm, Mid Cap.