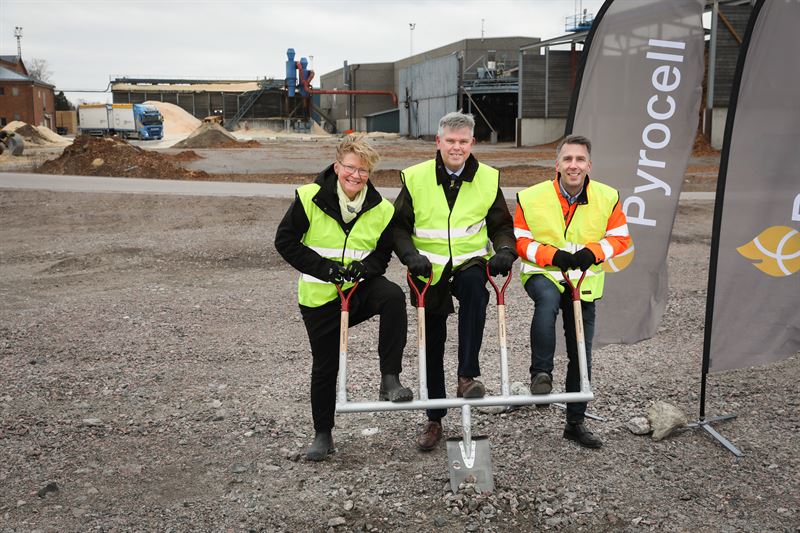 Pyrocell’s new plant at the Setra Kastet sawmill in Gävle is under construction. Pyrocell will produce non-fossil pyrolysis oil as a raw material for the production of renewable fuels.
“The company will be an important link in the value chain from Swedish forest to consumer fuel tanks,” says Pontus Friberg, Chairman of the Board of Pyrocell.

The wood industry company Setra and the fuel company Preem are collaborating to produce fossil-free pyrolysis oil from sawdust through the jointly owned company Pyrocell. At Pyrocell’s plant, sawdust, which is a waste product from Setra’s industrial process, will be converted into pyrolysis oil. The pyrolysis oil will be refined into renewable diesel and gasoline at Preem’s refinery in Lysekil.

The ground breaking ceremony for Pyrocell’s plant was only attended by a small group due to the corona virus situation. The attendees were Pyrocell’s Chairman of the Board Pontus Friberg, Setra’s CEO Katarina Levin and the facility manager at Setra Kastet Jonas Jadling. Governor Per Bill looks forward to visiting the facility at a later date.

“We welcome Pyrocell’s investment and think it is fantastic that they are establishing themselves here in Gävle. The investment will enable an increased amount of fossil-free fuels, which in turn will highlight the opportunities in our county and the national discussion on renewable fuels. It involves both jobs and a great deal of interest from the fuel industry, which sees great potential in the new technology to produce bio-oil from sawdust,” says Per Bill Governor of Gävleborg County.

“This investment is part of Setra’s strategy to increase the value and climate benefit of our products. Pyrocell is an important link in the renewable fuel value chain. Through the commercial processing of sawdust, we can contribute to the goal of fossil-free transport in Sweden by 2030,” says Katarina Levin, CEO of Setra.

The pioneering plant will produce around 25,000 tons of pyrolysis oil, corresponding to the annual fuel consumption of 15,000 cars. The goal is for the plant to be commissioned during the fourth quarter of 2021.“Waste products from our Swedish forests have the unique potential to enable Sweden to eventually become self-sufficient in liquid fuels instead of importing 85 percent as we do today. This investment is part of Preem’s ambition to produce 5,000,000 cubic meters of renewable fuel by 2030 at our refineries in Lysekil and Gothenburg,” says Petter Holland, CEO of Preem.

About Pyrolysis
Pyrolysis is a process where a substance is rapidly heated to a high temperature so that the solid material evaporates and can be condensed into a liquid. Through pyrolysis, residual materials from the forest such as branches, roots and sawdust can be converted into an oil, which can then be refined into renewable gasoline and diesel.

About Pyrocell
In August 2018, the company Pyrocell was formed, which is jointly owned by Setra and Preem. The company’s business concept is to produce bio-oil from sawdust. Setra has the raw material, sawdust, while Preem has refineries and filling stations. The pyrolysis oil plant at Setra’s sawmill in Kastet outside Gävle creates a new strong value chain for renewable fuels, from forest to tank.

Preem is Sweden's largest fuel company. We refine and sell fuels, heating and lubricating oil, as well as other products for companies and individuals. Most of our production, almost 80 percent, is exported to the international market. Preem employs around 1,500 people, of which 950 work at the refineries. Preem had a turnover of SEK 92 billion in 2018. Read more at www.preem.com.