The record-breaking future of engine braking comes to IAA 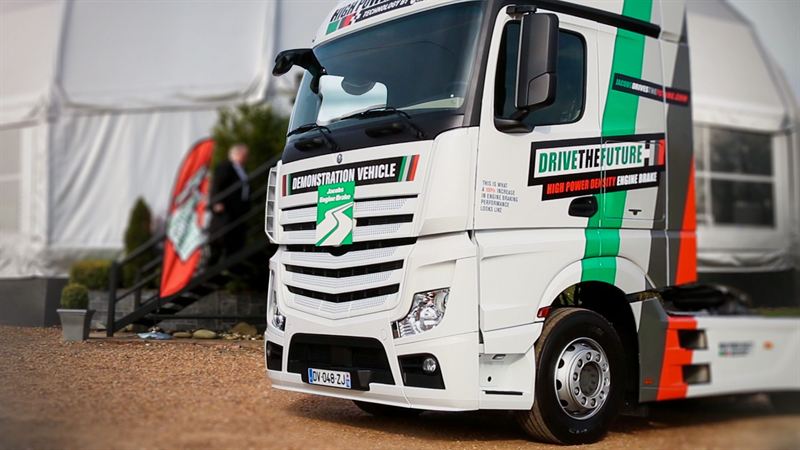 The production-ready Jacobs’ HPD Engine Brake realises one-and-a-half times the braking performance of traditional compression release braking over the engine’s entire operating range and more than two times the braking performance at lower rpm (the same retardation at 1400 rpm as at 2100 rpm previously). Jacobs’ new calibration and revised cam design delivers 2000 Nm of retarding torque at 1300 rpm and beyond and 611 kW power at 2500 rpm in a 13-litre engine, compared to 416 kW at 2100 rpm on the standard, identical engine. This provides large engine displacement retarding power in small and medium displacement diesel and natural gas engines. While delivering revolutionary braking performance, the HPD system is quiet in operation (it had notably lower peak positive power noise than the four-stroke engine braking in NVH drive-by tests), being fully integrated into the customer engine’s overhead design. It can also assist with exhaust after treatment thermal management by preventing the catalyst from cooling during descents.

Sergio Sgarbi, Jacobs Vehicle Systems president, said: “Jacobs invented the High Power Density Engine Brake five years ago, bringing the technology to the point where this year, we became ready to invite customers to drive it for the first time in a modified demo truck. At IAA, we would like to invite more potential customers who have heard about HPD in the media and from industry colleagues to come to our booth and learn more about the technology. We see a perfect opportunity for the HPD brake in Europe, where there is a premium on retarding power and where Jacobs’ conventional compression release engine braking has been adopted by Daimler, Renault, DAF, Deutz and Volvo. ”

Jacobs’ HPD Engine Brake was developed in response to the drive by global engine suppliers to provide higher levels of engine braking performance at lower engine speeds and improve thermal management to match industry trends such as down speeding and downsizing of engines, which are driven by the need for better fuel economy and lower total cost of ownership. Engine brake retarding performance is becoming increasingly important because key strategies for improving fuel efficiency are reducing the natural retarding of the vehicle caused by wind resistance, engine, drive train, and rolling resistance from the tyres.

Jacobs’ HPD Engine Brake transforms the four stroke engine into a two stroke compression device by deactivating the main intake and exhaust valve events and supplementing with two stroke valve events. Whereas a conventional engine brake has one compression release and one brake gas recirculation event per cam rotation, this innovative and patented two-stroke technology achieves two braking events per cam rotation. It is fully variable with controlled boost modulation, which allows the driver to achieve the right balance between retardation, speed and efficiency.

Jacobs Vehicle Systems is headquartered in Bloomfield, Conn., where it has a 25,000 square meter design, testing and manufacturing facility, with support sites in Europe, Japan, India as well as a manufacturing facility in Suzhou, China. Jake Brake® products are used by heavy and medium-duty diesel engine manufacturers globally. Registered to the ISO 14001 and TS16949 standards, Jacobs Vehicle Systems is the world’s leading producer of vehicle retarding and valve actuation technologies and can be found at www.jakebrake.com.

For media enquiries, interview requests and to request a test drive of the HPD-equipped demonstration truck, please contact:

Sergio Sgarbi, Jacobs Vehicle Systems president, will be at IAA on September 22ndand available for media interviews, on request. Steve Ernest, vice president of engineering and business development, will be present on September 21st, 22ndand 23rd. Please contact the media contact above to request an interview.