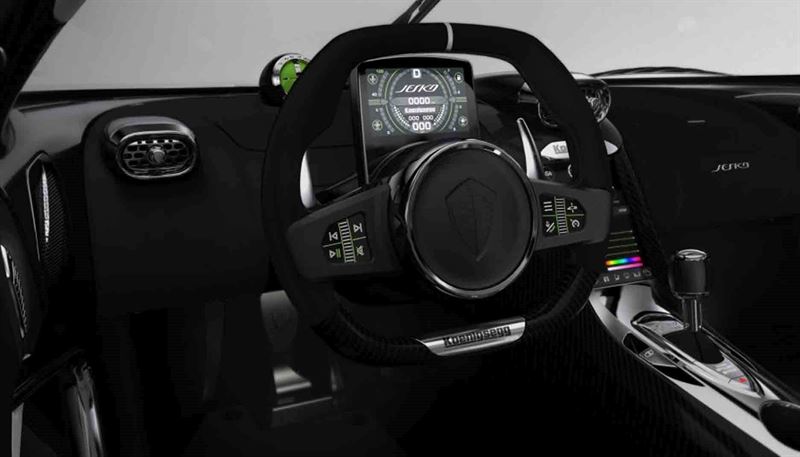 Koenigsegg’s Jesko hypercar model features a new, racing-inspired SmartCluster instrument screen developed with Qt. The screen is mounted directly behind the steering wheel and while the screen physically rotates with the steering wheel, the central zone – and the key information within it – always remains at level as the steering wheel turns. The SmartCluster’s compact, five-inch (108x64.8mm) screen displays all the information the driver needs in a neat, logical layout. The SmartCluster marries the IVI system with the car’s key instruments, including the speedometer, which are displayed with a digital readout instead of traditional analog gauges.

With two small touchscreens embedded into Jesko’s steering wheel, SmartWheel makes a suite of features accessible to the driver with just a touch or a swipe, without the need for constant visual connection. The screens’ default configurations enable functions such as audio control, phone control, ride height control and cruise control. However, the screens are context sensitive, and other options may be shown or configured into the system. Qt’s Professional Services has supported Koenigsegg to achieve its goals in software development.

“Koenigsegg has been a long-standing leader in automotive innovation, and Qt is eager to support them in building a digital cockpit befitting of the fastest production cars on Earth,” said Juhapekka Niemi, Executive Vice President, Sales, The Qt Company. “The driver experience is evolving from a physical steering wheel and centralized dashboard to multi-screen displays with a variety of connectivity and features. Qt enables Koenigsegg’s IVI product suite to provide one unified, streamlined user experience across multiple screens, seamlessly putting a wealth of features at the driver’s fingertips while maintaining the ease of use necessary to keep the driver’s focus on the road.”

About The Qt Company
Qt Group (Nasdaq Helsinki: QTCOM) is a global software company with a strong presence in more than 70 industries and is the leading independent technology behind millions of devices and applications. Qt is used by major global companies and developers worldwide, and the technology enables its customers to deliver exceptional user experiences and advance their digital transformation initiatives. The company's net sales in year 2018 totaled 45,6 MEUR and it employs some 300 people. To learn more, visit http://qt.io.