The Readly Magazine Review of 2018 reveals what the UK public is really interested in. 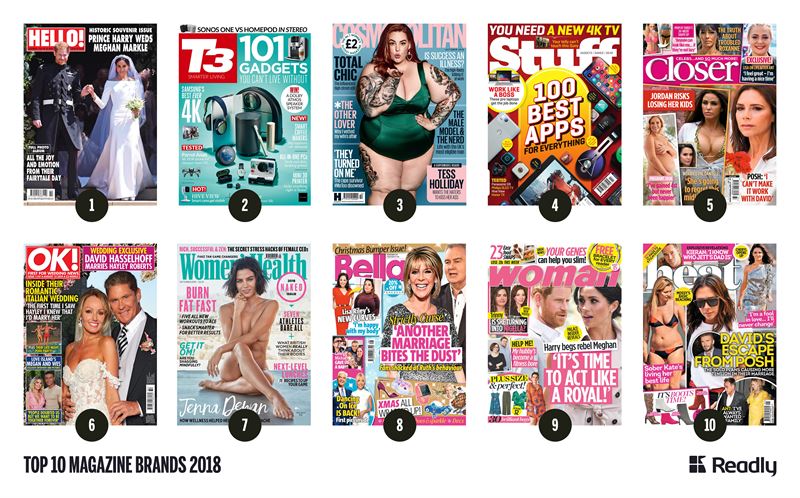 The Readly Magazine Review of 2018 reveals what the UK public is really interested in.

Each year, the digital magazine app Readly tracks which magazines are being read across its portfolio of 605 UK titles and which covers have caught the public’s imagination through 2018.

HELLO! tops the ranking with their in-depth coverage of the Prince Harry and Meghan’s Royal Wedding. The most-read issue of the year was HELLO!’s ‘Historic Souvenir’ (21st May), covering the wedding day with a full photo album of the royal couple and their friends and family.

Yet behind the feel-good escapism of Harry and Meghan, there is an ongoing interest in technology, health and general lifestyle as the ranking of the Top Ten Magazine Brands in the Readly app shows.

The most read digital titles across all magazine categories in 2018 were:

Ranj Begley, UK Managing Director at Readly said: “With two royal weddings, the World Cup and Brexit preparation, it’s been a big year for the nation and the magazines on our platform. The brands which have caught the imagination of our readers are in Celebrity, Technology and Women’s Lifestyle. All of them reveal a lively interest in how our world is changing around us so rapidly, but from very different and usually very personal angles.”

By looking at specific covers, The Readly Magazine Review also highlights ‘stand out’ issues. This is where an individual issue performs more strongly than the average trend and identifies which covers caught the eye of Readly subscribers.

The leading issues were Baking Heaven ‘strawberry and cream layer cakes’, Classic Rock ‘100 Greatest albums of the 90s’, Autovolt with its ‘eco-friendly electric and hybrid cars’, World Soccer featuring the ‘World Cup preview’, Attitude’s Pride Awards with Zander Hodsson and Prima with Kirsty Allsopp on ‘not being the perfect parent’.

Ranj Begley, UK Managing Director at Readly said: “As the nation prepares for an uncertain future economically and politically, we are choosing to read about things that make us smile, enhance our lifestyle and inspire us. When times are tough, we focus on what really matters to us personally and what we can relate to.”

Top categories - an appetite for current affairs and hobbies

The figures also indicate that the top hobbies consumers read about were photography, model railways and history. When it comes to leisure and sport, subscribers were mostly interested in football, golf, cycling, running, cookery and travel, with an increasing focus on health and wellbeing.

Key figures in politics and business: from Trump to Elon Musk

Within the current affairs category, the top titles were TIME, Newsweek, The Spectator and The Oldie. Whilst Brexit has generated much debate over the past year, it was not the hottest subject according to Readly subscribers. The most read issues within current affairs were:

1.TIME: ‘The Tourist Trap’, asking if Europe turning into a tourism theme park with ‘over-tourism’ ?

2.Spectator: ‘The New Narcissism: modern men want to be virtuous’

3.Newsweek: ‘What if Elon Musk succeeds?’

The Readly Magazine Review revealed that consumers have a growing interest in the views of business leaders and entrepreneurs who are shaping the future, perhaps even more than politicians who rarely feature in the rankings.

Ranj Begley, UK MD at Readly said: “There is a real sense that the public is losing interest in the endless coverage of world leaders such as Trump and Putin – important though they still are. Under pressure, we find refuge in what we know and love – our houses, our hobbies, our own specific interests. Also, entrepreneurs such as Elon Musk are becoming the new celebrities, as business models now matter as much as political manifestos. Then, add in a good dose of Dad’s Army nostalgia to give a little stability and humour to our chaotic, disrupted world.”

Readly is a digital newsstand which provides unlimited access to thousands of national and international magazines via the app. Over the last year, Readly subscribers spent a total of 22 million hours reading digital magazines, with an average of 22 minutes per session and 7 hours a month.

The Readly Magazine Review of 2018 tracked 605 UK magazine titles. With international titles also available to UK consumers, over 3000 titles are available to read via the app.