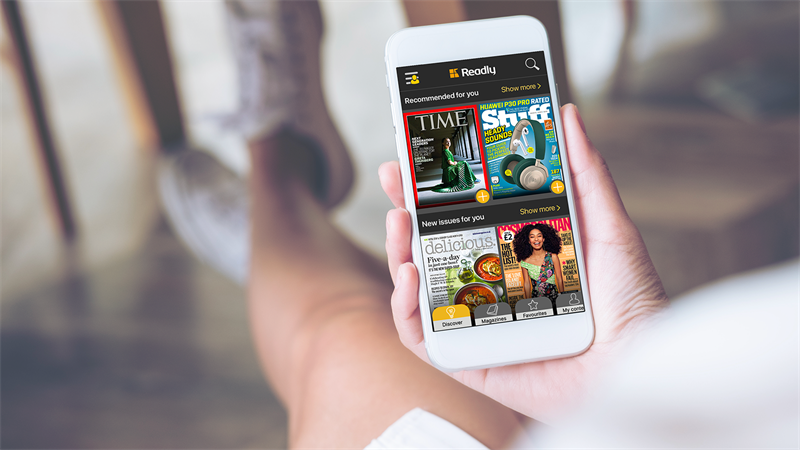 Got time? Make it count. That is the message coming from digital magazine subscription service Readly. The new branding campaign highlights that the increasing amount of time spent on scrolling social media or watching viral videos could be used for more rewarding activities such as reading quality content from the 800 publishers on the Readly platform.

Readly is launching the new branding campaign in several markets across Europe. With around 5,000 national and international titles in over 16 languages, Readly is encouraging people to use their spare time on something that counts - discovering new interests, learning about new topics, or relaxing while getting inspired by favourite titles or subjects of their choice. In these times people also have an increasing interest in staying up to date with news.

Chief Growth Officer Cecilia von Krusenstierna at Readly said: “We want to encourage people to reflect around the use of their time and emphasize the value of using Readly. With a lot of high quality content and millions of articles, our aim is to become the antithesis to planless flickering and scrolling on the mobile.”

There is a common perception in society that we lack spare time, however statistics show that people globally spend an average of 2 hours and 23 minutes per day on social media platforms[1]. According to a 2019 study by Swedish organisation Internetstiftelsen, 75% of people interviewed considered that the time they spent on social media was not meaningful.

Krusenstierna continued: “We are very proud of the depth and breadth of our content portfolio on Readly. With thousands of magazines, from Vogue to Forbes and everything in between, we truly believe we can cater to everyone. We want to attract all the curious minds out there to use their time more meaningfully and to discover the wide variety of quality content produced by publishers worldwide.”

The campaign starts on the 30th of March and will run for 6 weeks, the main media will be digital with YouTube, Webb-TV, other SoMe and display. In Sweden the campaign will have extensive coverage with different offline channels such as TV. The tactical outtakes will be visible in social and digital channels and will also be included on the additional seven focus markets for Readly in the UK, Germany, the Netherlands, Italy, Austria, Switzerland, Ireland and the US.

Three different short videos showing clips typically getting a lot of attention and views in social media, but still considered rather “meaningless” will introduce the viewer to the message.

Responsible for the campaign:

Readly is a digital subscription service that lets customers have unlimited access to nearly 5,000 national and international magazine titles - all in one app. Founded by Joel Wikell in Sweden in 2012, Readly is today one of the leading companies in digital magazine subscriptions in Europe with users in 50 markets. In collaboration with around 800 publishers worldwide, Readly is digitizing the magazine industry. Our purpose is to bring the magic of magazines into the future, enabling the discovery and survival of quality content. During 2019 Readly distributed more than 120,000 issues of magazines that have been read 83 million times. www.readly.com