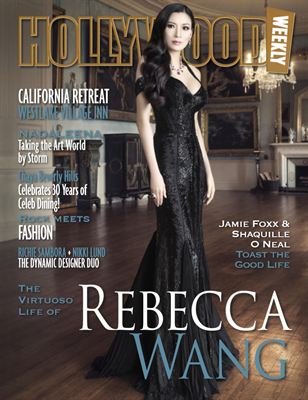 In a six page interview given in the latest issue of Hollywood Weekly magazine, Rebecca Wang provides the most insightful account of herself to date, creating a kaleidoscopic portrait which covers the early formative influences and interests in her life, her passions, values and belief systems, sources of motivation and the broadest definitions of her aims, and by no means inconsiderable achievements.

Whether describing her work-life route from academic success at a prestigious US university through personal development and learning as a practising psychotherapist, or her first cinematic creation as an executive Hollywood producer working with a cast of A-list Oscar nominees and a BAFTA winner, or sharing a modest insight for her inimitable star quality appearance and bearing, or in showing the dedication which she brings to her philanthropic work, Rebecca reveals herself to be a special multifaceted person of many talents who brings a highly intelligent and hands on approach along with an appreciative, compassionate and respectful attitude, to both mankind and life, and all that they bring.

Rebecca spent her early years in Asia, but she later lived and worked in the US and Europe. Having lived abroad from a young age, along with yearly international travel with family provided her "a whole new set of experiences", which she described "not only exciting but very rewarding". The experiences left her with an enduring love of travel, and also a practice of behaving open-mindedly and compassionately to all people, no matter where they are from.

Rebecca's life has been and still is a continuous journey, both personally and professionally. In the interview she acknowledges the different ingredients that have formed her: how the practice of sport, ballet and piano when young honed the qualities of focus, discipline and patience; how, always trusting her intuition to take her to the right path, she chose to study at university of California at Berkeley with a Master's degree in clinical psychology, then practiced psychotherapy in leading institutions.

Her recognition of the healing role of the arts in therapy was the stepping stone in the move towards the active role of creation in the film industry. She acknowledges that this move, which may seem for many to have been a seismic shift, was a huge challenge, describing it as "an achievement and also a major learning curve", a personal mastery, which meant breaking through her own fears and limitations.

Rebecca describes her primary driving force and motivation being the "ability to create, to see and to watch an idea grow and develop from nothing into a finished entity", along with the privilege of being "able to experience and develop or learn from that complete process".

Rebecca lives her life to the fullest. She has a huge desire for and love of the arts which translates into her being an active supporter for the film and TV charity BAFTA, as well as world class museums and art galleries in London. Beyond the arts, her philanthropy, which she views as a universal human attribute -she feels that each and every one of us can make a difference, is directed towards the realm of health and humanitarian issues, most notably the American Foundation for AIDS Research (amFAR) for which renowned Inspiration Galas she has acted as sponsor and chair.

With a reputation of always appearing elegant, calm and composed when at special events, Rebecca credits her regular practice of meditation or yoga before any such occasion as possibly contributing to the serene aura around her in any of the accompanying photos.

Rebecca shows no hint of complacency: when asked about her accomplishments she explains that she never feels as if she is atop a mountain of impressive achievements, she explains that for her, there is always a natural urge to strive further. When asked to define the greatest obstacles she had to overcome when making her first Hollywood production, she is pragmatic in her response. The film executive producer explains that it's no different to any other field of work; the key was to be able to overcome every obstacle as they occurred on a daily basis.

Crucial in her approach to life are the values she judges as important: honesty, integrity, respect and loyalty. The choice of lotus flower as her company's logo with its symbolism of growing through difficulties towards the light underlines the morality she incorporates into all that she does

With this life position, it is more than probable that whatever the next challenges that come her way, Rebecca will render them as brilliantly as everything else she has touched to date through the working of her own unique alchemy. 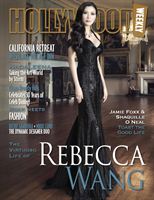