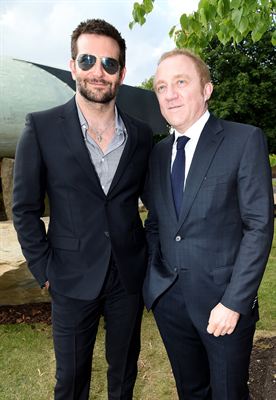 Tuesday July 1st saw the art world’s most prestigious party, the Serpentine Summer Party, take place  by the Serpentine Galleries amid the oxygenated greenery of Hyde Park, ”the lungs of London”.

The Serpentine Galleries are two contemporary art galleries in Kensington Garden, Hyde Park. Comprising the original Serpentine Gallery, and the new Serpentine Sackler Gallery designed by Zaha Hadid architects which opened in September 2013, they are linked by the bridge over Serpentine Lake from which the galleries get their names, they are among London’s best loved art venues. Up to 1.2 million visitors annually enjoy the parallel exhibitions at both galleries which comprise prestigious collections of modern and contemporary art, along with their impressive Exhibition, Architecture, Design, Education and Public Programmes.

The Serpentine Summer Party is an annual fund-raiser for the galleries, helping to further their educational remit. It extends on the wide and strong support and patronage enjoyed by the galleries and has long held the reputation of being a sumptuous and glamorous evening, on a par with Ascot, Wimbledon and the Chelsea Flower Show as one of the quintessential outdoor events during London’s summer months.
Co-hosts for this year’s party were of a particularly high-powered variety: joining Gallery Director Julia Peyton-Jones and Co-Director Hans Ulrich Obrist, Chairman and former Mayor of New York Michael R Bloomberg, Chairman and CEO of luxury brand Kering Francois-Henri Pinault, and international hotelier Andre Balazs.

Rebecca Wang is a dedicated supporter of all art forms. In addition to her roles as patron to the Tate Modern, National Gallery, and Serpentine, she is a member of both the Academy Circle for BAFTA (the British Academy of Film and Television Awards) and also Director of the Circle at the Victoria and Albert Museum. Zaha Hadid is a globally renowned architect who created the London Aquatics Centre for the 2012 Olympics. She has also been one of the previously chosen architects for the Serpentine Pavilion and has recently become the first woman to win the Design Museum’s Design of the Year award for the Heyder Aliyev culture centre in Baku.

Unique to the Serpentine Galleries, this pioneering annual commission offers internationally renowned architects an opportunity to create their first built structure in England. Previous architects who have participated in designing a pavilion for the summer months have included Frank Gehry, Oscar Niemeyer and Jean Nouvel.

This year’s architect, Smiljan Radic from Chile, has created the 14th pavilion which will extend some 350 square metres across the lawn. He sees his design as being in the tradition of the popular follies built in parks or large gardens between the 16th and 19th centuries, and describes it as: “a fragile shell suspended on large quarry stones. This shell, white, translucent and made of fibreglass will house an interior organised around a patio. At night, thanks to the semi-transparency of the shell, the amber-tinted light will attract the attention of passers-by, like lamps attracting moths.”

From the patio inside the pavilion, the natural setting will seem lower, with the sensation that the entire volume is floating.

During its four month tenure in the park, the Pavilion will serve as a flexible multi-purpose social space with a café inside, and on Fridays will be the stage for the Galleries Park Nights – eight specific events incorporating art, poetry, music, film, literature and theory along with three new commissions by emerging artists.

The evening was sponsored by luxury Italian brand Brioni and organised by Events Fusion.