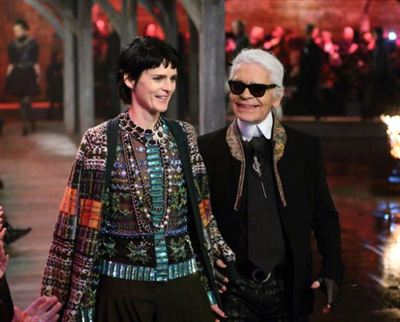 Karl Lagerfeld, the creative director of luxury Paris brand Chanel, ensured a major coup for Scotland this winter by choosing a ruined palace in West Lothian as the dramatic backdrop for the brand's most spectacular and extravagant fashion show.

The Metiers d'Art Collection 2012/13 took place at the very special location of Linlithgow Palace on Tuesday 4th December at 6pm. Entry to the event was by invitation only. The collection presented the latest beautiful creations from the design studio founded by Coco Chanel.

The Collection series, which launched in 2003, has previously been shown in iconic locations such as Grand Central Station in New York, Huangpu Park in Shanghai and other exotic venues in Tokyo, Moscow, Bombay, Paris and London. The Metiers d'Art Collection 2012/13 is an opportunity for the brand to showcase the outstanding craftsmanship and work of the ten ateliers gathered under the umbrella of Chanel subsidiary Paraffection (‘in the name of love’). Paraffection was set up in 1997 in order to promote the heritage, craft and manufacturing skills of fashion artisan workshops. The subsidiary represents part of a long held strategy of Chanel to protect - and if necessary purchase - it's most valued suppliers.

The Metiers d'Art show always carries a clear theme. Karl Lagerfeld chose Edinburgh as the location for the collection, inspired by the rich heritage of Chanel in Scotland and the craftsmanship of Scottish tweed and cashmere, which are an integral and iconic part of Chanel's creations. Linlithgow Palace was selected for its fairytale-like surroundings, gothic architecture, nearby loch and adjacent rocky hills. The founder of the Parisian fashion house, Coco Chanel also spent a significant amount of time in the Sutherland region of the Scottish Highlands during her love affair with the Duke of Westminster in the early and mid-1920s. It is said that their relationship influenced her use of the Scottish materials in her designs.

Chanel's most recent buy and rescue has been Barrie Knitwear, a Scottish company based in Hawick on the Scottish Borders which has been supplying Chanel for over 25 years with high quality knits, including Chanels iconic two-tone cashmere cardigans. As part of Dawson's, a 140 year old textile conglomerate that went into liquidation earlier this year, Barrie faced an uncertain future, but Chanel's acquisition has secured the jobs of 176 skilled employees and also a sustainable future for a historic brand. The cashmere industry employs around 4,000 people and contributes almost £200m to the Scottish economy. Barrie positions itself as a quality Scottish Knitter with fashion flair, while retaining classic and semi-classic 'essentials', and is now accepted as one of the most innovative Scottish knitters in design, development, and manufacturing. It boasts an international reputation for the manufacture of high quality cashmere for some of the world's most prestigious couture houses including Hermes.

The Palace, situated 15 miles to the west of Edinburgh, was originally a royal manor, then a fortification known as the Peel, whose site made it an ideal military base for securing the supply routes between the castles of Edinburgh and Stirling. In the 15th and 16th centuries it was one of the principal residences of the monarchs of Scotland. The palace was also the birthplace of James V and Mary Queen of Scots. After the act of Union in 1603, when Scotland's monarchs left for England, the palace, while maintained, was little used. Bonnie Prince Charlie visited Linlithgow in 1745 on his historic march south, and legend has it that the elaborate fountain ran with wine in his honour on the occasion.

Due to the legendary reputation of the Metiers d'Art shows in the fashion world, Linlithgow dwellers are thrilled to have hosted such a high calibre event in their small town. The event was seen by the locals as a fantastic opportunity to showcase Scotland's culture and heritage in the Year of Creative Scotland 2012. Historic Scotland worked with fellow tourism agencies to capitalise on the opportunities the international show brought.

Attendees from all over the world have had the opportunity to visit the capital's tourist attractions, including the palace and the Royal Yacht Britannia. The guest list comprised of prominent figures within the fashion and entertainment industry. Those invited included Brad Pitt and Angelina Jolie, Anna Wintour, Rebecca Wang, Carine Roitfeld and Keira Knightly. Producer Rebecca Wang said ‘It's wonderful to be here tonight, Linlithgow Palace is a special historic location for such a stunning and prestigious show'. 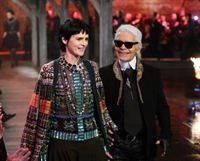 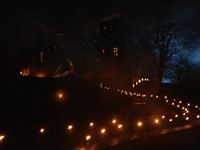 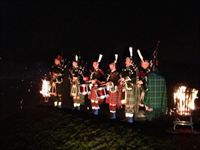