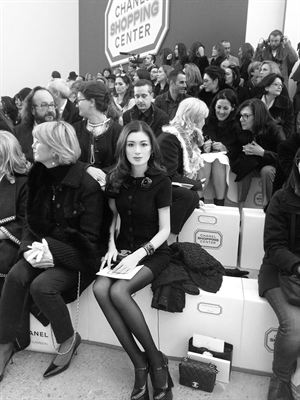 Chanel’s 2014 AW collection unfolded on the morning of Tuesday 4th March at 10.30am in the impressive the Grand Palais in the 8me district of Paris.

Tuesday’s show, always one of the most highly anticipated events of Paris Fashion Week, took place against the stunning backdrop of the Grand Palais. Built in 1900 for the World Fair, the building is a mixture of classicist stone facade, art nouveau iron work and glass and is best known for its enormous glass roof which affords plenty of natural light.

Among the show’s attendees were Keira Knightly, Anna Wintour, Melanie Griffith, Rihanna and Rebecca Wang. Helmsman of creativity at Chanel is Karl Lagerfeld, perhaps the most famous designer of international renown who has headed up the design team there for the last thirty years. Lagerfeld not only leads and oversees the creations for each collection, but also photographs the advertising campaigns for all the houses under his direction each season. He is also to design limited edition homes on La Moda, the world’s first dedicated fashion island. Over his time at Chanel, Lagerfeld has retained the brand’s signature features such as tweed, gold accents and chains, but has also chosen to break away with the traditional lady-like look and experiment with different styles. Coco Mademoiselle and In Between Wear, both of which target younger women, have been launched under his direction in the last decade.

His show opened in lively and active mode: the Palais had been turned into one giant hyper market. Aisles of shelves were stacked high with bright supermarket products, many of them bearing the Chanel logo or labels that linked with the brand. Fresh fruit and vegetables, along with “Chanel” doormats, hammers, cleaning liquids and tins of tea and coffee were among the items on view.

Among these aisles moved the models, showing their clothes and simultaneously getting on with their daily lives, shopping for products. The sudden appearance of an older couple, she in pink boucle suit and he with moustache and jacket, both laden with rue de Cambon bags, served to hint at the diversity and sweep of the designs.

The collection’s range ran from conservative love for a suit, through sophisticated tailoring and simple separates to edgy casual. Oversize shoulders, cage waists and a good amount of pastel tweeds were out in force.  Footwear was flat and interpreted with multi-coloured trainers, some of which reached calf-high as front lace boots. Hair was in sleek pony tails which at the back sported extension braids in fabrics hinting at youth, rebellion and ethnic street style.

Colours were rich and varied and chief among the themes were layering, contrast and variety. Encompassing casual, smart, conventional and edgy, the relaxed collection showed a multiplicity of designs in daily action, offering something for each and every woman.

The end of the show saw a mad grab by attendees for the displayed products, along with assurance that the food on display would later be distributed among the homeless of Paris.  Chanel delivered- a sustainable and totally contemporary show. 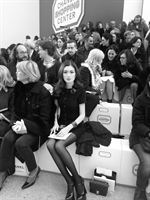