To the Moon in 40 days – The Moonhouse on Kickstarter, the world’s largest crowdfunding platform 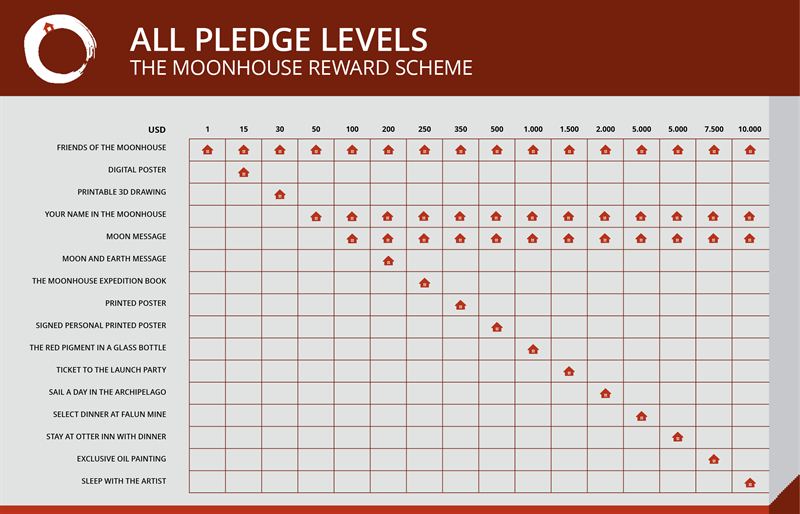 On Friday September 19, The Moonhouse – the first art project on the Moon – will initiate a crowdfunding campaign on Kickstarter. The target is to reach 250 000 USD in 40 days and the initiative aims to involve the American and international online community that wish to see The Moonhouse become reality. The amount needed to make it happen is a total of 15 million USD by November 30, 2014. If achieved, The Moonhouse will be launched to the Moon in October 2015.

The Moonhouse is a physical and achievable art project where the goal is to complete a self-constructing house to place on the surface of the Moon in October 2015. The initiator and artist Mikael Genberg is the entrepreneur behind the project. Genberg and his team of space engineers and experts have been working on The Moonhouse for approximately 10 years. In May 2014, The Moonhoue gathered new strength through a press conference that intrigued media across the globe. It was the starting point of a crowdfunding campaign that has been running since May 28th to November 30, and set out to collect the 15 million USD required in order to realize the project. Out of the full amount, 5 million USD will complete the house, and 10 million USD will pay the ticket to the Moon together with American aerospace company Astrobotic.

Campaign on Kickstarter for 40 days
The Moonhouse goes live at Kickstarter, the world’s largest platform for crowdfunding today. The purpose is to reach out to Americans, but also other nationalities active on Kickstarter. The project will run for 40 days at https://www.kickstarter.com/projects/1317303162/the-moonhouse. In addition to this, a parallel crowdfunding is available on www.themoonhouse.com/en until November 30.

-        When I was in California in 2008, discussing The Moonhouse with representatives for NASA, the immediate reaction was “wow, The Moonhouse is the American dream, but in Swedish”. Through Kickstarter we hope to effectively reach out to people globally. Not least people with ties to Sweden living abroad, who would like to help foster and support the Swedish cultural heritage globally. We also hope to engage people with an interest in culture, arts, technology, science and space. The goal on Kickstarter is 250 000 USD, which is the cost of Prototype 1, but we’re hoping Kickstarter will take The Moonhouse further – perhaps even all the way to the Moon! says Mikael Genberg.

Crowdfunding – A means for growth
The digital revolution the past few years have made way for crowdfunding. This method has been used to finance a project from an early stage by engaging a great number of backers who believe in the project potential. A campaign on Kickstarter has a maximum of 60 days. If the target is not reached within the decided period, the money is refunded to the backers. There are several types of crowdfunding, the most common of which is a reward-based crowdfunding that means that individuals donate money in return for a reward. The greater the donation is, the more valuable the reward.

-        The use of crowdfunding for The Moonhouse is self-evident. The method is based on many contributing a little, and allows for projects to be realized using combined forces. The Moonhouse core-values are the same; to break through mental barriers and together change the perception of what is possible, says Johan Molin, Managing Director at Falu Rödfärg, a company that this year celebrates 250 years by supporting The Moonhouse and the global crowdfunding.

17 tiers of rewards from 1 USD to 10 000 USD
A supporter can participate in The Moonhouse project by purchasing so-called Moon meters. A person can donate any sum, from 1 USD to 10 000 USD. The Moonhouse has a total of 17 tiers of rewards. For 50 USD, backers’ get their name inscribed on the inside of The Moonhouse, and for 100 USD, one can send a personalized digital message to the Moon. For the largest donation of 10 000 USD, you and your friend can camp at the artist Mikael Genberg’s home where Moontalk and creators-joy are on the agenda! (See the full rewards scale in the attached fact sheet).

The campaign on Kickstarter – https://www.kickstarter.com/projects/1317303162/the-moonhouse - will be running for 40 days until October 28, 2014. The Kickstarter crowdfunding campaign is part of a larger campaign that continues in parallel on www.themoonhouse.com/en until November 30, 2014.

All funds contributed are donated in full to the realization of The Moonhouse.

Johan Molin, CEO Falu Rödfärg – for questions regarding the crowdfunding and Falu Rödfärgs collaboration with The Moonhouse
E-mail: johan.molin@falurodfarg.com, telephone: +46 (0)70 573 2773

The Moonhouse
The Moonhouse is a seamless meeting between art and technology, culture and science, history and future, but above all between space and man. The Moonhouse is a symbol for what people together can make possible. The last few years’ technical advancement has created new opportunities whereby people around the globe can engage in one single purpose, via crowdfunding and social media. This year, Sweden’s national color, Falu Rödfärg, is celebrating its 250th anniversary by supporting The Moonhouse in the form of a global crowdfunding initiative that aims to realize the vision – a red house with white corners on the Moon. All proceeds generated via crowdfunding will accrue in full to The Moonhouse. 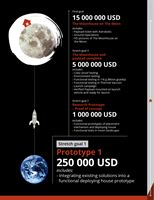