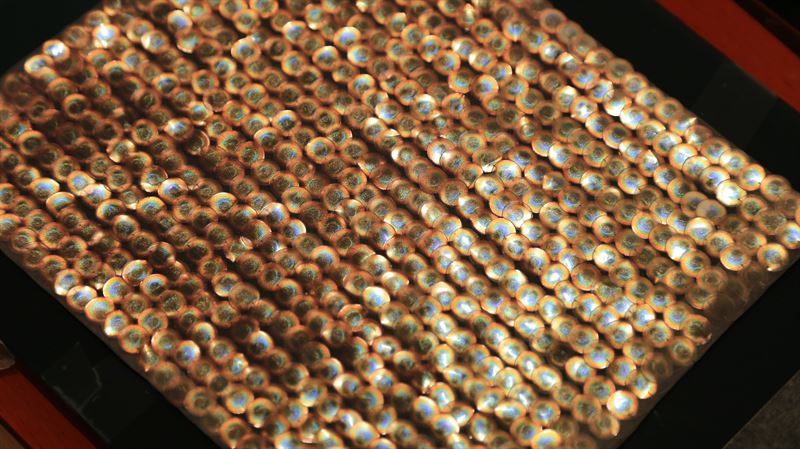 Is it really possible that something glittering and shimmering as sequins could be biobased? The answer is yes. A concept was recently presented at Milan Design Week by Elissa Brunato, a designer graduating from Central St Martins in London who have worked with researchers at RISE to explore the use of cellulosics in different roles than traditionally seen.

Many times sustainability is seen as something disassociated from the wants of the fashion world. Elissa Brunato has collaborated with material scientists Tiffany Abitbol and Hjalmar Granberg at RISE to demonstrate that it is possible to make sequins of wood. Sequins that shimmer in a variety of colours usually consist of reflective materials such as aluminium, usually on a plastic base. Elissa’s project “Future Sequin” shows that luxury and beauty are not in contrast to sustainability. At the Material Futures Exhibition during Milan Design Week, Elissa showcased swatches of embroidered cellulose nanocrystal sequins.

“In general, people were in awe that the sequins were shimmering naturally as they were first convinced that the material was petrol based, purely from its visual appearance,” says Elissa Brunato.

What it is all about is to orient the nanocrystals at the nanoscale to create structures that in turn give rise to interference which gives the shimmering effect that can be seen in nature (butterflies, beetles, nacre, Pollia Condensata berries, etc.) but is difficult to reproduce in manmade materials.. Colors are reflected when the length-scale of the structures is in the visible spectrum and the iridescence arises (different colours seen at different angles) due to variations in the film structure. This interesting feature of cellulose nanocrystals, namely the ability to form liquid crystals that can be dried into coloured and iridescent films, has driven the researchers to want to understand more about how structure can be controlled and used for different properties.

“It’s interesting to understand how to control the self-assembly behaviour that gives rise to these colours. Can we for instance speed up the process to create fast drying, iridescent cellulose nanocrystal coatings? Can we improve mechanical properties and water resistance of the films, whilst maintaining their structural colours?,” says Tiffany Abitbol.

Tiffany is an expert on cellulose nanocrystals and is the one who mainly contributed with her technical knowledge in the work with the sequins. Hjalmar on his side has experience of many successful collaborations with designers to demonstrate ideas and concepts. However, the sequins are just one step along the way to explore new forms of cellulose and nanocellulose.

“This research project is driven by curiosity and a desire to find bio-based and biodegradable alternatives to today's fossil-based materials,” says Hjalmar Granberg.

“It was wonderful, being able to show how the merging of different industries can bring forth new approaches to topics such as sustainability,” says Elissa Brunato.