Weinheim/Koblenz, March – 2017 is a year of many anniversaries in the Rhineland-Palatinate. The occasions to celebrate are particularly diverse this year: 500 years since the Reformation, the 200th anniversary of the fortified city of Coblenz, more than 200 years since William Turner’s journey down the Rhine, and 70 years since the Rhineland-Palatinate was established. What better time to visit the Romantic Cities than now? Idyllically situated in the southwest of Germany and favoured by the mild climate of the Rhine and the Moselle, the Romantic Cities Trier, Coblenz, Mainz, Speyer, Worms, Idar-Oberstein and Neustadt an der Weinstraße promise not a moment of boredom. In contrast to many a larger metropolis, their fascinating fusion of nature and urbanism will captivate you even more. You can’t help but fall in love with them!

Speyer
Speyer saw the birth of the Protestant movement. The Imperial Diet (Reichstag) of Speyer in 1526 marked the city as the centre of Reformation in Europe and earned it a place right at the heart of German history. Read more ...

Worms
The city of Luther and the Nibelungs is already preparing for its great anniversary in 2021.  Read more ...

Mainz
In the Gutenberg Museum, you’ll discover how Luther’s theses could spread so quickly and far beyond the country’s borders due to the invention of the printing press. Read more ...

Coblenz
Follow the call of the Loreley to the Ehrenbreitstein Fortress (the second largest after Gibraltar), cable car and Romanticum trio, which will make your visit to the only city on the banks of both the Rhine and the Moselle unforgettable. Read more ...

Trier
Founded by the Romans, the oldest city in Germany, and imperial residence of the Late Antiquity, Trier is the predestined location for cultural, historical and archaeological exhibitions concerning the ancient world. Read more ...

Idar-Oberstein
Here, you will never lose the sparkle in your eyes! In Bruce Willis’ birthplace, everything revolves around the fine treasures that make any woman’s heart beat faster. Read more ...

Located in the south west of Germany and blessed with a mild climate thanks to the Rhine and Moselle rivers, the Romantic Cities of Trier, Koblenz, Mainz, Speyer, Worms, Idar-Oberstein and Neustadt/Weinstraße appeal to visitors with their perfect combination of experiencing cities, culture and nature. 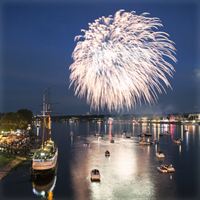