Facts about the Coronavirus outbreak

Only one month since the first reports of the Coronavirus, it is a global concern.

The consequences of the disease are extensive and a breeding ground for misconceptions, rumors and fake news. Safeture's analysts summarize what we know about the virus and how to act.

The novel coronavirus (2019-nCoV) outbreak, that emerged from a live animal market in the city of Wuhan, Hubei Province on December 20 19, is continuing to spread, and as of 30 January, the number of confirmed cases of infection in China has reached over 7000. The situation is developing rapidly, and during the last few days, the number of confirmed cases in China has increased quickly. The number of people who have succumbed to the disease has passed 170 people. 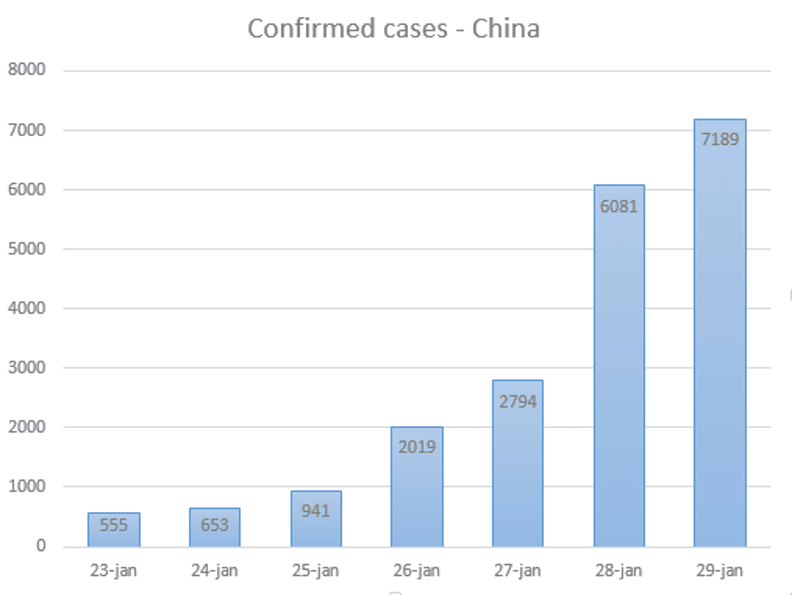 ​Small number of cases have occurred in more than ten countries around the world, including the US, Japan, South Korea, Germany and Thailand.

Impact on travel and trade

During the last week, the impact on travel has ramped up. Russia closed down border crossings with China on 29 January. Aviation authorities have implemented health screening at airports around the world. Multiple major airlines have suspended or decreased their flight services to China due to the outbreak of coronavirus. The following airlines have suspended flight operations to China:

The outbreak is expected to have a noticeable impact on trade. Authorities have taken the measure of extending the Lunar New Year, leading to increased downtime for many export companies. The Chinese national economy will be most affected overall, but disturbances to supply of various export goods may also result in shortages and price hikes in overseas markets. The effects of these supply disruptions may materialize gradually over the coming weeks.

Combating misinformation amid spread of coronavirus

As the outbreak of coronavirus accelerates, the spread of “fake news” about it also multiplied in several countries. A number of bogus claims were made and among others, they include:

The worrying trend has forced governments to act in order to prevent conspiracy theorists, trolls and cynics to boost the traffic of their accounts, at the expense of stoking fears among the public. For instance, the South Korean, Singaporean, Malaysian as well as Australian governments have all launched crackdowns on such misinformation that was spread via social media outlets, such as Facebook and WhatsApp, amid concerns that they could result in a panic among the general public.

To minimize the negative impact of such misinformation:

The number of cases is likely to continue to increase significantly over the next week as persons previously exposed to the virus develop symptoms. With the lockdown of Wuhan, Hubei province, the number of cases exported from the city will gradually be reduced, and the rise in cases in other parts of China will likewise slow. Although the effects of the lockdowns and travel restrictions in China will take effect and mitigate spread more over the coming weeks, it remains difficult to predict when the outbreak may reach a peak point. From an international perspective, the level of vigilance and preparedness among authorities is high. Even though similar lockdowns such as those imposed in China may become necessary in other countries, they are likely to be more limited in geographical scope.

On 30 January, the World Health Organization declared a global health emergency, also known as a Public Health Emergency of International Concern, is a formal declaration of an extraordinary event, where the disease has risk to spread internationally, and an international response may be required in taking a multi-national approach to containing the spread of disease, like coronavirus. The declaration of such an emergency, inclines countries to step-up their preparation and prevention against the spread of the virus.

With over 7000 infected so far and around 170 fatalities, the virus has an estimated fatality rate of 2 to 3 percent. Compared to the last major coronavirus outbreak, the SARS outbreak of 2003, which reached 33 countries, the novel coronavirus is considerably lower since that virus strain was fatal in circa 10 percent of those infected.

Safeture is a Swedish SaaS-company, founded in 2009. The company offers a unique security platform: Safeture, which is the new, complete way to take control of employee safety with state-of-the-art technology.

Safetures´ qualified analyst teams in different locations all over the world, compile security alerts and in-depth case studies as well as qualified assessments of the security situation in over 200 countries.