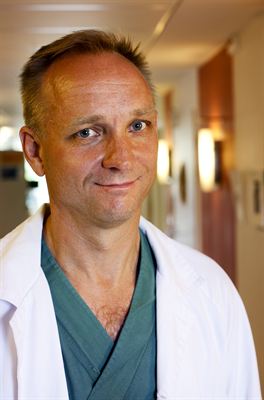 In the spring of 2013, a team of researchers and doctors at the University of Gothenburg performed the last of nine planned uterus transplants. The six-month follow up shows that live-donor uterus transplantation has a low risk despite extended surgery duration. In the next phase of the world-unique research project researchers will help seven of the women become pregnant through IVF treatment.

In Sweden alone, an estimated 2 000 young women of fertile age cannot become pregnant either because they were born without a womb or lost it later due to disease.

Professor Mats Brännström, researcher at the University of Gothenburg, is leading a unique research project aiming to make it possible for these women to have a uterus transplant and then get pregnant.

After more than a decade of research that has been evaluated in almost 40 scientific articles, in May 2012 the research team received permission from the Regional Ethical Review Board in Gothenburg to perform uterus transplants on ten Swedish women – the first in the world with living donors.

The first transplant was completed 15 September 2012, and the ninth and final in the spring of 2013The tenth woman involved in the project had to be denied at an early stage for medical reasons. Five of the donors are mothers of the receivers; the remaining four a close relative.

In two of the nine cases, the transplanted uterus had to be removed. In one cases due to blood clots in the transplanted blood vessels, in the other because of a local infection that was not fully treatable with antibiotics.

‘The women who had to have their transplanted wombs removed were of course very disappointed, but both of them have recovered well,’ says Professor Brännström.

The first transplant patients have now had their new uterus for 16 months. During 2014 the second phase of the research project will continue, and the seven transplant patients’ own embryos – produced via IVF prior to the transplant – will be placed in their uterus with the aim of starting a pregnancy.

`We have made the first attempts at this, but with respect to the women´s integrity we will not comment on the results in the specific cases´, says Brännström.

‘The prospects for success are good. On average, the women started menstruating about two months after the transplant, and we followed up on the women twice a week during the first month after the procedure, then once a week for two months and after that every other week. We found and treated a few mild cases of transplant rejection, but after six months, the immunosuppression could be reduced to relatively low levels in most cases and today all women are doing well and have returned to work,’ says Brännström.

The project is the world’s first systematic and research-based attempt to find a treatment for women with uterine infertility. Several medical, psychological and quality of life-related parameters are monitored among the women, which will be of great help for further progress in the field.

The article The first clinical uterus transplantation trial: a six-month report was published in Fertility and Sterility on 28 February. In summary, this study shows that a live-donor UTx procedure has a low risk despite extended surgery duration.

For a copy of the paper please contact the author, or Fertility and Sterility staff: nkucik@asrm.org

For more information about the research project, see: http://bit.ly/1eyPDqG

FACTS ABOUT THE TRANSPLANTS
The nine uterus transplants were performed by a team of ten gynaecologists and transplant surgeons. The transplants also involved experts from USA, Spain and Australia.

During the transplants, the donor surgeries were unexpectedly long: 10-13 hours. The surgeries were performed with minimal blood loss and none of the patients have required blood transfusion during surgery or intensive care.

Contact:
Mats Brännström, Professor of Obstetrics and Gynaecology at the University of Gothenburg and Chief Physician at the Sahlgrenska University Hospital
+46 (0)31 342 22 27
+46 (0)736 254 455
mats.brannstrom@obgyn.gu.se