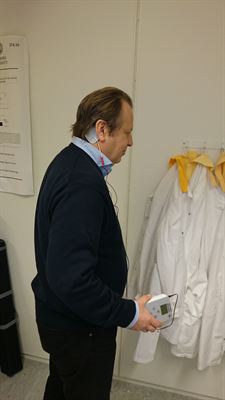 Researchers at the Sahlgrenska Academy have shown that a weak electric “noise” can improve balance and motor skills in patients with Parkinson’s disease. In cooperation with NASA, the research team has now developed a portable prototype that will be used in long-term studies of Parkinson’s patients in their home environment.

Parkinson’s disease is a slowly degenerative neurological disease that is expressed as impaired motor control, tremors, stiffness and, in later stages, problems with balance.

The symptoms are caused by a lack of the signal substance dopamine and is traditionally treated with medication. However, balance problems do usually not improve much with pharmacological treatment.

In earlier experiments on rats, researchers at the Sahlgrenska Academy showed that noisy electric stimulation of the balance organs can be used to change the activity of the brain, thereby balancing the effects of dopamine shortage and improve the animals’ motor skills and balance.

The researchers have now tested the same method on ten Swedish Parkinson’s patients.

The patients were studied in both medicated and unmedicated states. On one day, the patients received an active noise stimulation and on another day inactive treatment, blinded to which day the current was active.

The experiments show that the active noise stimulation improved both the patients’ balance and the combined symptoms.

“The effect on balance was particularly apparent when the patients were in the unmedicated state, which is very positive,” says Associate Professor Filip Bergquist at the Sahlgrenska Academy who led the study.

In a follow-up study over a longer time, the researchers will now have the Parkinson’s patients wear a stimulator that is smaller than a wallet and can be carried in the pocket.

“If the long-term treatment improves the patients’ walking, balance and symptom variations, we could in the next five years develop the noise stimulation technique and introduce it as a new treatment,” says Filip Bergquist.

The current study is published in the scientific journal Brain Stimulation and was conducted in cooperation with researchers at NASA, who also helped with technical equipment.

The article Effects of Stochastic Vestibular Galvanic Stimulation and LDOPA on Balance and Motor Symptoms in Patients With Parkinson’s Disease was published online in Brain Stimulation on January 5. 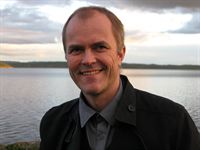 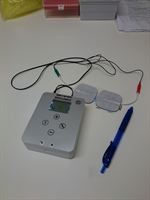