“The King has confirmed our potential, which is valuable to us”

The visit of His Majesty King Carl XVI Gustaf's to Enviro's recycling plant in Åsensbruk provided an important confirmation of both the company's environmental technology and its international potential.

"It is a great honour and an important milestone for us that His Majesty visited our plant and that he has firmly expressed confidence in our business. The King is greatly committed to environmental issues and is an outstanding ambassador for both Swedish industry and environmental technology in the international arena", says Thomas Sörensson, CEO of Enviro. 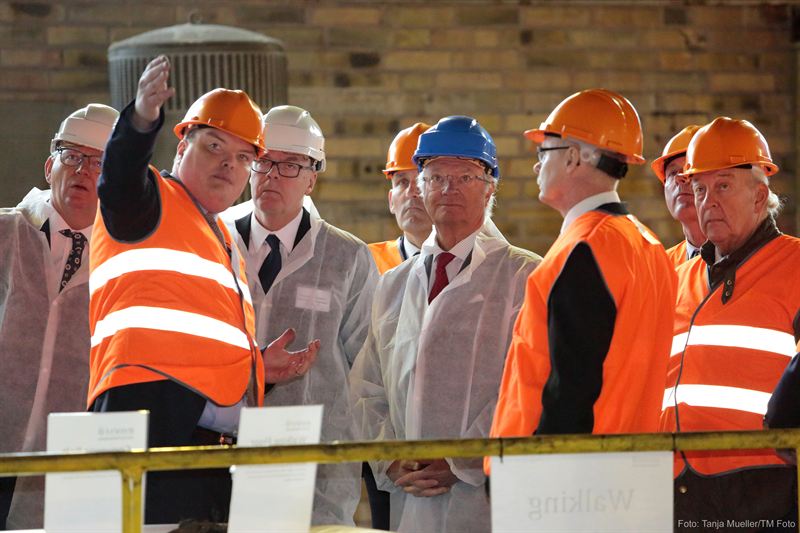 His Majesty has a genuine and long-term commitment to Swedish industry and environmental issues. The participating entrepreneurs and media representatives also followed the royal visit to Åsensbruk with great interest.

"The visit is an enormous source of inspiration for collaboration and development locally in Åsensbruk and Dalsland. For Enviro, which has a clear ambition and strategy to sell environmental technology plants internationally, such a visit is extremely important in demonstrating how unique and valuable our patented technology is", says Thomas Sörensson, CEO of Enviro.

During the visit, His Majesty showed great interest in the company's unique recycling process which transforms car tyres into carbon black, oil, gas and metal before reintroducing the goods to the industry for commercial use. His Majesty expressed particular interest in the major international potential of the technology.

"This is a plant which can contribute to environmental improvements and development in other parts of the world, in which Sweden can be involved. I see this as a major opportunity for a number of locations in the world", said His Majesty the King to Radio P4 Väst while commenting on his visit.

Later in the spring, on 10-12 May, Chile's president Michelle Bachelet will be making a state visit to Sweden at the invitation of His Majesty the King, to which Enviro has been invited to take part of and present their solution, which is in line with Chile's ambition regarding producer responsibility for the manufacturers of mining tyres. Enviro has earlier been involved in far reaching negotiations with Chile to establish a recycling plant for South American mining tyres in the country.

"We will soon be having a Chilean state visit, which provides an excellent opportunity to discuss these possibilities", His Majesty told Radio P4 Väst.

"A visit of this magnitude is important for Sweden's international investment in environmental technology, in which Enviro has an important role to play. We have a technology which is an essential contribution to a circular economy within the rubber industry and which also works commercially", says Thomas Sörensson, CEO of Enviro.

Enviro is an environmental company that offers profitable recycling of tyres as well as refined materials to the rubber industry. The company sells full-scale recycling plants to industrial investors and operates its own plant for tyre waste in Åsensbruk, Sweden. Headquartered in Gothenburg, Enviro has 20 employees and is listed on Nasdaq First North with Erik Penser as Certified Advisor. www.envirosystems.se

Enviro is a company developing, building and operating industrial plants for material recovery from End of Life Tyres (ELT). The company has developed a process, based on a patented technology, where gas generated in the process is heating the tyres in absence of oxygen. This enables the materials in the tyres to decompose and be recovered instead of incinerated. Thus, a sustainable recovery of the resources Carbon black, Oil, Steel and Gas is obtained. The products are used in new products, replacing fossil resources to help the customers reach their sustainability targets. Enviro was founded in 2001, has its head office in Gothenburg and runs its own plant for ELT tyres in Åsensbruk, Sweden. The company is listed on the Nasdaq First North Growth Market with Mangold Fondkommission AB, tel. +46 (0)8 5030 1550, ca@mangold.se, as its Certified Advisor. www.envirosystems.se