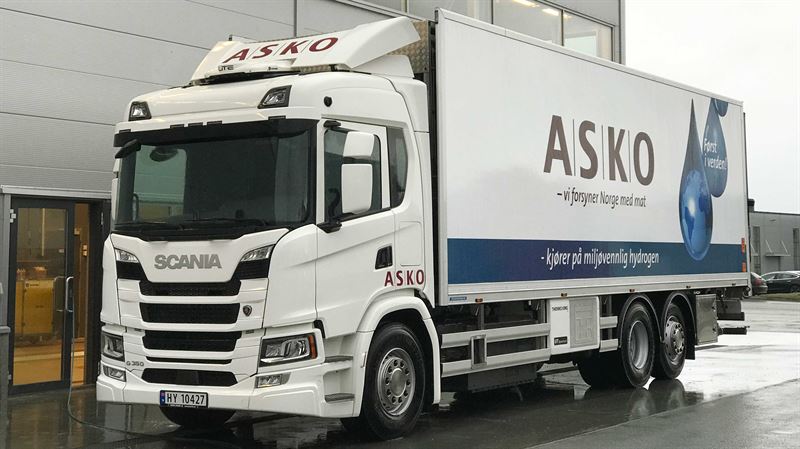 ASKO and Scania celebrate the start of operations of four hydrogen gas trucks with electric driveline and of ASKO’s hydrogen gas station in Trondheim, Norway.

There is no one-size-fits-all-universal solution within electrification of heavy commercial vehicles. One of the technology tracks that Scania has explored with its customer ASKO is fuel cell electric trucks powered by hydrogen gas. This venture now goes into the next phase with four trucks being put into real operation in a pilot that is one of the first of its kind. The pilot will be the basis for further learning and development for both companies.

“Scania continues to work with cutting edge technology that supports the shift to fossil free transport. An important part of this is done together with some of our most progressive partners, such as ASKO, in customer-near development”, says Karin Rådström, Head of Sales and Marketing at Scania.

Scania is working with its electrification roadmap in the same way as with the combustion engine-technology; a multi-facetted approach with a broad range of solutions. The company has researched and developed different kinds of bio-fuelled hybrid-electric technologies, as well as fully-electric vehicles. Scania’s battery electric bus was launched in 2019 and we also work with electric vehicles that can be charged via electrified roads or through hydrogen-powered fuel cells as is the case with ASKO.

“Hydrogen gas is an interesting option for long haulage electrified transport and early tests show that the technology also works well in colder climate. We will continue to monitor the performance of these trucks closely. I also want to commend ASKO for taking early and bold steps to ensure a supply of hydrogen sourced from renewable sources and infrastructure for fuelling. The company is a player who really take action to catalyse a shift toward sustainable transport,” says Rådström.

As always, Scania’s work is based on a modular approach. In the four trucks deployed in ASKO’s operations, the internal combustion engine in the powertrain is replaced by an electric machine, powered by electricity from fuel cells fed with hydrogen and from rechargeable batteries. The rest of the powertrain is composed of the same standard components used in the hybrid trucks and buses that Scania already delivers.

Facts about the truck: