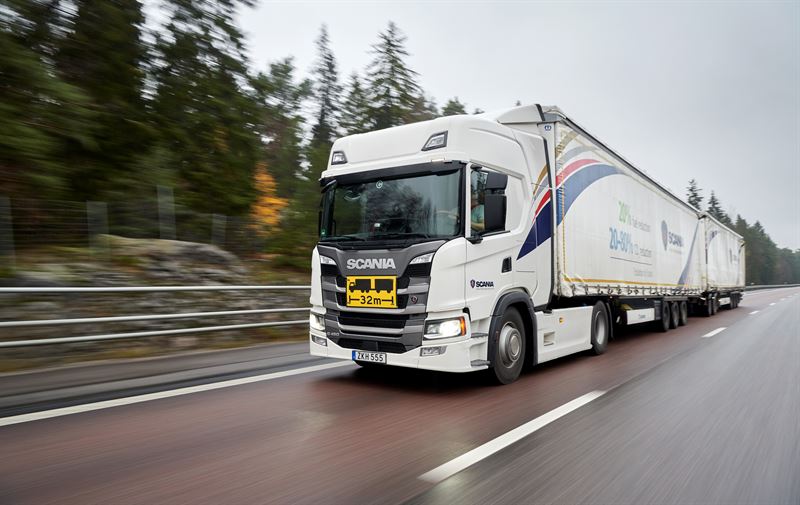 Through its inhouse haulier, Scania demonstrates how carbon emission reductions by more than 95 percent can be achieved with existing technology.

Scania’s Transport Laboratory is used for some of Scania’s own internal transport. The operations consists of 45 trucks and coaches, of which 14 are tractors for long distance transport. As of 2018, the fleet runs only on fossil free* fuel and hybrid drive which reduces carbon emissions by more than 95 percent.

It was founded 2008 as an extension of the company’s research and development department in an effort to learn even more about its customers’ challenges and how profitability can be improved. Already in its first five years the lab reduced fuel consumption by 20 percent and carbon emissions by 50 percent per transported tonne.

“This is about practising what we preach. We are not asking our customers and the industry in general to do something we are not willing to do ourselves,” says Jan Björklund, Head of Scania Transport Laboratory.

Every day, the Scania Transport Laboratory operates 14 truck and trailer combinations between the manufacturing plants in Södertälje, Sweden, and Zwolle in the Netherlands. Over the course of a year, each truck is driven for approximately 400,000 kilometres, which is about three times as much as a truck would run in the same time in an average haulier operation. That means the Lab offers a uniquely quick opportunity for Scania to test and assess vehicle quality and performance. Equally important is to test theories about flow analysis and planning as means to remove waste from the transport system, as well as driver training.

“One of the key learnings for us is the effect of planning and driver training. We see that it works and that fairly small adjustments have big impact. For example, reducing the speed from 90 to 80 km/h in the long haul operations reduces fuel by 10 percent whilst the comparative time loss is only 1 percent,” says Björklund.

* We are not at 100% fossil free fuel in the operation as there is a lack of HVO/biodiesel fuel stations outside Sweden which means that some trucks sometimes have to refuel with some regular diesel.

Scania is a world-leading provider of transport solutions. Together with our partners and customers we are driving the shift towards a sustainable transport system. In 2017, we delivered 82,500 trucks, 8,300 buses as well as 8,500 industrial and marine engines to our customers. Net sales totalled nearly SEK 120 billion, of which about 20 percent were services-related. Founded in 1891, Scania now operates in more than 100 countries and employs some 49,300 people. Research and development are concentrated in Sweden, with branches in Brazil and India. Production takes place in Europe, Latin America and Asia, with regional production centres in Africa, Asia and Eurasia. Scania is part of TRATON AG. For more information visit: www.scania.com.