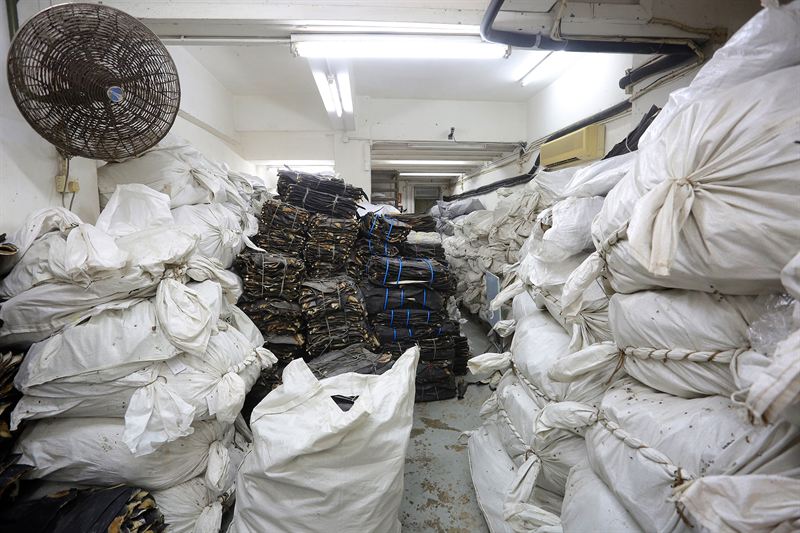 Despite a worldwide ban on the transportation of shark fins by major shipping carriers, a three-month investigation by the marine conservation group Sea Shepherd Global -- as part of their global shark defense campaign Operation Apex Harmony -- has verified that large shipments of shark fin are still arriving in Hong Kong on airlines and shipping lines that have made ‘No Shark Fin’ carriage ban commitments.

Sharks are in big trouble around the world, with some populations crashing by more than 90%. Some species, such as the hammerhead shark, are facing a very real threat of extinction.

A growing consortium of major shipping lines, airlines and NGO’s met with senior members of Hong Kong Customs and Excise Department and Hong Kong Agriculture, Fisheries and Conservation Department (AFCD) last Friday to brief them on the Sea Shepherd Global investigation findings and discuss matters relating to wildlife crime. Top of the agenda was how to prevent products from CITES-listed endangered species being unknowingly shipped. These included many types of vulnerable and endangered shark fin found in the Hong Kong shark fin trade, such as hammerhead shark and oceanic whitetip shark.

A history of the shark fin transport bans

Since 2010, international wildlife conservation groups have been focusing on the shark fin supply chain by lobbying both airlines and shipping lines to ban the transport of shark fins and shark products. Yet the laundering of fins taken from illegal species of sharks inside consignments of fins from legal yet unsustainably-fished shark species is still rife. To their credit, Maersk, the world’s largest shipping line, led the way as the first company to implement a worldwide ban on shark fin carriage in 2010, with 16 of the world's leading container shipping lines soon following their example.

"Maersk Line is committed to enforcing our policy not to carry sharks fin products on our ships. It is frustrating that some traders seemingly mis-declare the cargo they intend to ship with us in order to try to get around the restrictions we have put in place. However, we are grateful to Sea Shepherd for their investigative work to highlight this problem, and we are working with Sea Shepherd and other NGOs as well as with HK Customs and other stakeholders to tighten our procedures to ensure the ban we place on carriage of shark fin is effective in the future," said Tim Smith, Chairman & Chief Representative – North Asia Region, Maersk.

Around 92% of shark fins entering Hong Kong arrive via sea freight, while the remaining 8% arrive via air cargo. Having worked with a number of locally and internationally respected conservation specialists since 2010, the Hong Kong-based carrier Cathay Pacific became the first airline to place an initial ban on un-sustainable shark and shark products, including shark's fin, in September 2012, extending to a full ban on shark's fin in June 2016.

“As a signatory to the United for Wildlife Transport Taskforce Buckingham Palace Declaration, Cathay Pacific is committed to not knowingly facilitate or tolerate the carriage of illegal wildlife products. This is an important initiative by Sea Shepherd, and we will support it as much as we can to close out any loopholes that affect the effectiveness of our embargo policies,” said Evelyn Chan, Head of Environmental Affairs at Cathay Pacific Airways.

The airlines campaign was led by Alex Hofford, now of WildAid Hong Kong, and supported by around thirty global marine conservation and animal welfare groups, including Sea Shepherd and WWF.

Evidence the ban hasn’t been working

As with most environmental issues, the first challenge is to change the rules. But the second and much harder challenge is to enforce those rules. Despite recent media claims that the trade is down overall, Sea Shepherd Global began its investigation after seeing evidence of large shipments of shark fins arriving in Hong Kong’s Sheung Wan district. “The months leading up to Chinese New Year are always the busiest months for the shark fin traders as they seek to fulfill the demand of the mainland Chinese market during the festive holiday” said Gary Stokes of Sea Shepherd Global.

The three-month long investigation documented large shipments arriving by carriers who have pledged to ban the transport of shark fins, including two 45-foot containers full of shark fins from the Middle East which arrived in Maersk containers. The problem that companies such as Virgin, Maersk and Cathay Pacific are now facing is that shark fin traders are abusing the system by fraudulently mis-declaring and mis-labeling shark fin under generic categories such as “seafood”, “dried seafood”, "dried goods" or “dried marine products” to avoid detection. An airfreight shipment on Virgin Australia Cargo and Cathay Pacific which had been falsely declared as ‘fish products’ was not identified by Customs. The exporter who attempted to transport these goods has now been blacklisted by Virgin Australia Cargo which has a ban on the transportation of shark fins.

“It's so sad what the team at Sea Shepherd has managed to discover. Thousands and thousands of sharks slaughtered just for their fins to be turned into bowls of soup. For those people who have knowingly participated they need to hang their heads in shame. For Sea Shepherd and the team led by Gary Stokes, they need to be congratulated for exposing this foul, and sometimes illegal trade,” said Richard Branson, founder of Virgin Group.

"Well over thirty airlines and just under twenty container shipping lines now operate No Shark Fin cargo bans. Yet some airlines, such and Japan Airlines and All Nippon Airlines, are resisting industry best practice and are still propping up the crime-ridden shark fin trade. WildAid is calling on all passenger airlines, cargo airlines, container shipping lines as well as express parcel carriers such as FedEx and TNT, to act sustainably, ethically – and above all legally – by ruling out dirty shark fin shipments from their cargo holds." said Alex Hofford, of WildAid.

Working together to close the loopholes

Presented with the evidence, Maersk, Cathay Pacific and Virgin are now working in close collaboration with Sea Shepherd Global and WildAid to close all remaining loopholes being exploited by the shark fin trade. “A full review is being undertaken of their booking procedures and alert mechanisms to help them enforce their bans” said Stokes.

All international trade is monitored and facilitated by the World Customs Organization (WCO), which maintains a detailed list of Harmonized Shipping Codes (HS Codes). These are 6-digit codes (HK goes one step further by increasing to 8-digits) which can show, at a granular level, the exact contents of a cargo shipment. However HS Codes are right now only being used to track import/export data exclusively for statistical reasons, with trade declarations only being filed after a shipment has arrived. Sea Shepherd Global and WildAid are calling for the switching of Hong Kong's trade documentation filing requirement to be switched from post-shipment to pre-shipment. With the availability of pre-shipment information, Hong Kong Customs and Excise Department will be able to carry out more effective risk-profiling and hence more targeted enforcement work. Mandatory filing of full HS codes prior to port arrival would ensure that airlines and shipping lines can be more certain of the exact contents of cargo shipments. Such a system is already in place in the United States as an effective counter-terrorism measure. Spain also operates similar, more stringent, shipping procedures that can give customs the edge over the agile transnational wildlife crime syndicates. The Hong Kong government is also calling on the public and the business sector to support the availability of pre-shipment information to align with international mainstream and best customs practices, yet is facing stiff resistance from the trade.

Sea Shepherd Global has launched a full in-depth investigation into the global shark fin trade and its supply routes to provide a clearer picture to shipping companies for them to best tackle and enforce their commitments to environmentally sustainable shipping policies.

* The Convention on International Trade of Endangered Species of Wild Fauna and Flora.