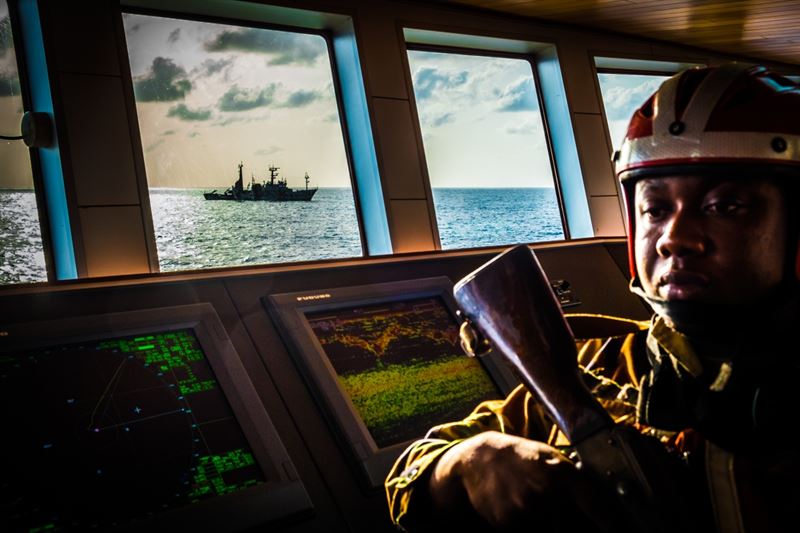 On the 15thof January 2018, the Ghanaian-flagged Fishing Vessel (F/V) Panofi Fore Runner was arrested in waters belonging to the West African state of Liberia by the Liberian Coast Guard assisted by Sea Shepherd crew. The 71-meter long purse seine vessel was apprehended with nine fish aggregation devices (FADs) fishing in Liberian waters and without a Liberian Fishing License.

FADs are essentially ‘fish magnets’ that attract fish and the ones deployed by the F/V Panofi Fore Runner are high-tech devices that alert the vessel to fish activity. The vessel can then set its two-kilometer net on the FAD, scooping up the fish underneath.

Fishing without a Liberian fishing license is the most serious offense under the Liberian Fisheries Regulations, for which the penalty can be a fine up to one million United States dollars (USD $1,000,000). Each deployed FAD constitutes a separate offense for a possible total fine of USD $9,000,000.

In an ill-fated bid to evade justice, the Master and Chief Officer offered bribes of USD $1,450.45 and USD $6,911.80 to Liberian Coast Guard boarding officers, incidents that will lead to additional charges being brought against the vessel.

The F/V Panofi Fore Runner is now detained in the port of Monrovia awaiting legal action.

“The attempt by the Master and the Chief Officer to bribe Liberian Coast Guard sailors is criminal behavior and clear evidence that they had something to hide. It is common to see other criminal activity such as forgery, tax evasion and bribery associated with fishing offenses, which is why the Ministry of National Defense is resolute in combatting illegal fishing as transnational organized crime”, said Hon Brownie Samukai, Liberian Minister of National Defense.

“It has been five years since vessels owned by Panofi Company Ltd were arrested and convicted of illegally fishing in Liberian waters. The quick apprehension of a Panofi vessel that decided to try their luck in once again circumventing Liberian law, showcases the incredible capability of the Liberian Coast Guard to conserve and protect Liberian waters and illustrates the importance of government and civil society working together to stop illegal fishing”, said Director of Campaigns Peter Hammarstedt

Since February 2017, under the name Operation Sola Stella, Sea Shepherd been assisting the Government of Liberia to tackle IUU fishing by providing the use of a civilian offshore patrol vessel operating in Liberian waters, under the direction of the Liberian Ministry of National Defense. Operation Sola Stella has resulted in the arrest of nine vessels for illegal, unreported and unregulated (IUU) fishing.  Developing countries are particularly vulnerable to IUU fishing, which accounts for up to 40% of the fish caught in West African waters.

In 2016 Sea Shepherd partnered with the government of Gabon for Operation Albacore, resulting in over 40 fishing vessel inspections at sea and the subsequent arrest of three IUU Congolese fishing trawlers and one Spanish long-liner. Operation Sola Stella is a continuation of Sea Shepherd Global’s commitment to work actively with national governments and their Law Enforcement Agencies in the fight against IUU fishing.