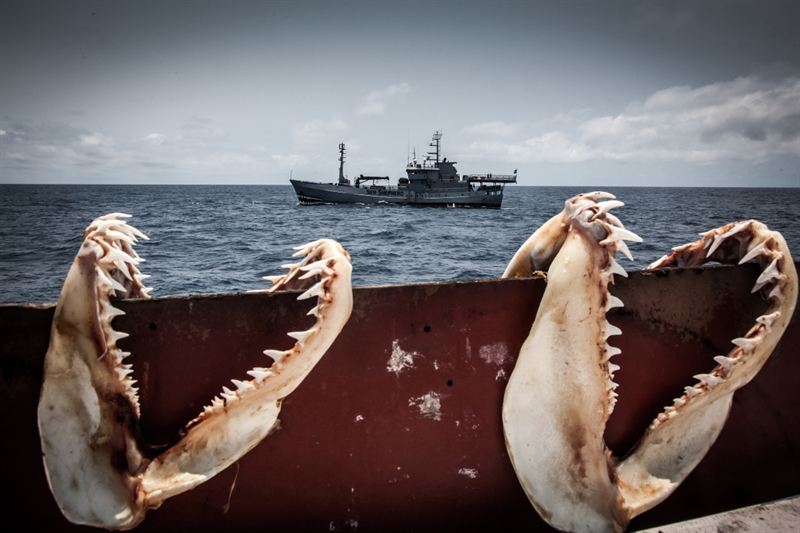 On the 5th of September, the Spanish long-line fishing vessel Baz was boarded in waters belonging to the Central African island state of São Tomé and Príncipe by São Toméan authorities, assisted by marine conservationists from Sea Shepherd and law enforcement officers from Gabon during a joint operation called Operation Albacore.

Although the long-liner was licensed to fish for 'tuna and similar species' inspections revealed that their fish holds were mostly filled with sharks, predominately blue sharks that are classified as 'near-threatened' by the International Union for Conservation of Nature (IUCN), but also shortfin mako sharks classified as ‘vulnerable’, one category away from ‘endangered’. Many of the shark fins had already been detached from their bodies, a suspected violation of the European Union Finning Ban (1185/2003) and its amendment (605/2013), which requires any captured sharks to be delivered with their Fins Naturally Attached (FNA).

There were almost twice as many sharks as tuna on board the Baz, with the vessel carrying 62,730 kilograms of blue sharks and 6,242 kilograms of shortfin mako shark, compared to 36,943 kilograms of Bigeye Tuna and 5,387 kilograms of Yellowfin Tuna.

Fishing line tracers (or snoods), which are the monofilament segments that support the fishing hooks, were reinforced with steel wire, thereby underlining the suspicion that the targeted species of the Baz was mainly sharks, not tuna. Steel snoods are used so that sharks do not bite through the fishing line and escape.

Fish on board were also found gutted and processed, which is a violation of São Toméan fisheries regulations when advance approval has not been sought, which the Baz did not obtain.

Just over one year earlier, on August 2016, São Toméan authorities, again operating on board Sea Shepherd’s M/Y Bob Barker, arrested a Spanish long-line fishing vessel, the Alemar Primero. On board the Alemar Primero were 87 tons of sharks and shark fins. The vessel was subsequently arrested and released three weeks later after paying a fine for various offenses unrelated to shark finning because, although covered under the European Union Finning Ban, shark finning is not yet expressly banned under São Toméan national legislation.

“The São Toméan fisheries department lodged a complaint with the EU Directorate-General of Maritime Affairs and Fisheries (DG Mare) to follow up on the European Union Finning Ban charges, but oddly charges were not pursued in Spain, the vessel Flag State, under the excuse of double jeopardy, claiming that penalties had already been meted out in São Tomé despite the fact that those penalties were not for shark finning”, said Sea Shepherd Director of Campaigns Peter Hammarstedt.

On the 10thof October 2017, the São Toméan fisheries department issued a Notice of Violation of Fisheries Rules to the Spanish ship owner as well as a request to the European Commission to investigate the violation of the European Union Finning Ban.

Sea Shepherd believes that the inspection and boarding of the Baz is an opportunity for the Spanish Flag State to finally reign in the criminal activities of its long-line fleet.

“The evasion of European responsibility in pursing charges against the Alemar Primero for violating the EU Finning Ban is why the Spanish long-line fishing fleet feels confident to continue finning sharks in São Toméan waters in violation of European conservation regulations,” said Peter Hammarstedt. “The EU DG Mare must set an example with the Baz. If the Spanish Flag State does not penalize the Baz, then there will be no justice for São Tomé and Príncipe and the EU Finning Ban will be toothless.”

In 2016 Sea Shepherd partnered with the government of Gabon for the first Operation Albacore campaign, resulting in over 40 fishing vessel inspections at sea and the subsequent arrest of three IUU Congolese fishing trawlers and one Spanish long-liner. Operation Albacore re-commenced in 2017 with the arrival of the Bob Barker in Gabon on the 5th of July.

In September, São Tomé and Príncipe continued its partnership with Operation Albacore, sending two marines and one fisheries observer from São Tomé to join Sea Shepherd crew, Gabonese marines (Marine Nationale) and Gabonese fisheries enforcement (ANPA) officers on board the M/Y Bob Barker, to further detect and deter IUU fishing in the Gulf of Guinea.

The campaign aims to expand existing monitoring, control and surveillance measures; to detect and deter IUU fishing activity while also monitoring legal compliance by licensed fishing operators. Throughout the 2017 tuna fishing season, Marine Nationale and ANPA have been stationed on board the Bob Barker, working alongside Sea Shepherd crew to patrol Gabon's sovereign waters.

The European Union Finning Ban was passed as a conservation measure to ensure that shark bodies are not discarded at sea in order to make room for the more valuable shark fins, resulting in far more sharks killed than would otherwise be the case. Sharks are being killed in increasingly large numbers to meet an Asian demand for fins to make shark fin soup.  One-third of shark species are overfished to the extent that they risk extinction.

IMG_3763: The Spanish captain of the Baz with shark fins from fish hold.

IMG_3646: Shark jaws line the decks of the Baz as the Bob Barker stops the vessel for inspection.

IMG_3540: The Spanish-flagged Baz in São Tomé and Príncipe  waters.

IMG_3666: The Baz was boarded by Coast Guard from São Tomé and Príncipe .

IMG_3954: The Baz boarded by Coast Guard and fisheries inspectors from São Tomé and Príncipe , supported by Gabonese authorities and Sea Shepherd crew.