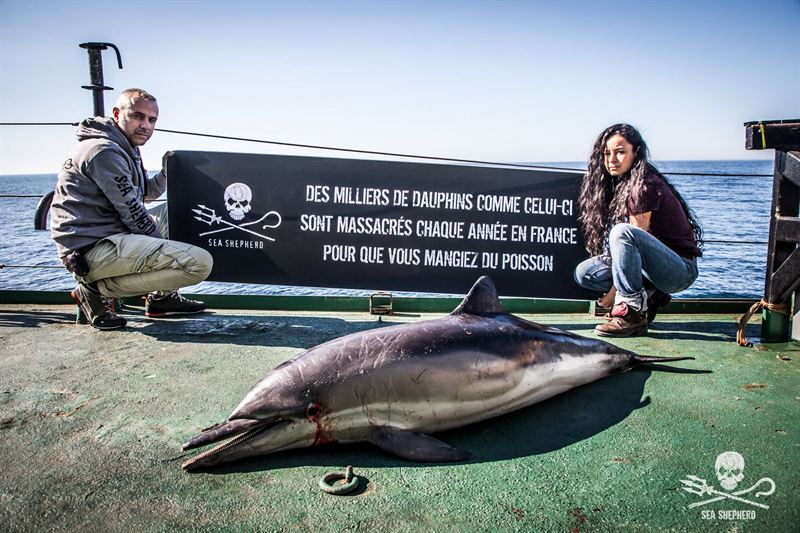 A dolphin killed in the net of a French fishing trawler was captured on film Tuesday night by marine conservation organization Sea Shepherd while patrolling fishing areas in France’s Bay of Biscay.

Sea Shepherd’s vessel the M/Y Sam Simon has been patrolling the French Atlantic Coast since February 11th to monitor the fisheries responsible for catching dolphins in a campaign called Operation ByCatch. Late Tuesday night they were able to record footage of a dolphin captured by two French trawlers off the coast of Lacanau. The two boats, Native 2 and La Roumasse, were using a pelagic trawling method that deploys a huge funnel-shaped net in the water between two vessels, known to be non-selective and particularly destructive on the spawning grounds of the sea bass where dolphins swim.

After following LeNatif 2 and La Roumasse for a few hours without them releasing the dolphin into the water, Sea Shepherd's ship crossed the floating body of a smaller dolphin showing traces of nets and hooks. "We decided to bring this dolphin ashore and expose it to passers-by to alert them to what is happening at sea," says Lamya Essemlali, President of Sea Shepherd France. The dolphin was retrieved by the Pelagis Scientific Observatory to be autopsied today.

While trawlers are responsible for many dolphin deaths, longliners, gillnetters -- who can each set up to 100 kilometers of nets per day! -- and industrial vessels further offshore fishing for fish meal and surimi are also responsible for dolphin catches. "Not enough people make the link between their fish consumption and the fact that we are destroying the sea, with no respect for marine life as a whole and no consideration for future generations," adds Essemlali.

Sea Shepherd’s Operation Dolphin ByCatch aims to expose dolphin deaths off the Atlantic Coast to put pressure on the French government to require fisheries observers on all commercial fishing vessels, enforce the accurate reporting of bycatch, and ban fishing practices that unnecessarily result in thousands of dolphin killed as bycatch every year.

190227-DB-TL-LeNatif2DolphinInNet-04-IMG_9857: French trawler Le Natif pulling up a dead dolphin in their net.

190227-DB-TLC-DolphinOnDeck-04-DJI_0016: Drone image of the dead dolphin hidden on the deck of Le Natif the next morning.

190227-DB-TL-DolphinOnDeck.Crane-03-IMG_0268: A dead dolphin discovered in the water being brought onboard Sea Shepherd’s ship the Sam Simon.

190227-DB-LamyaOnSamSimon: Sea Shepherd France President Lamya Essemlali with a banner on the Sam Simon: “Thousands of dolphins like this one are killed every year in France so you can eat fish.”