Sea Shepherd, Eco-Benin and the Government of Benin Launch New Partnership to Stop Illegal Fishing in Gulf of Guinea 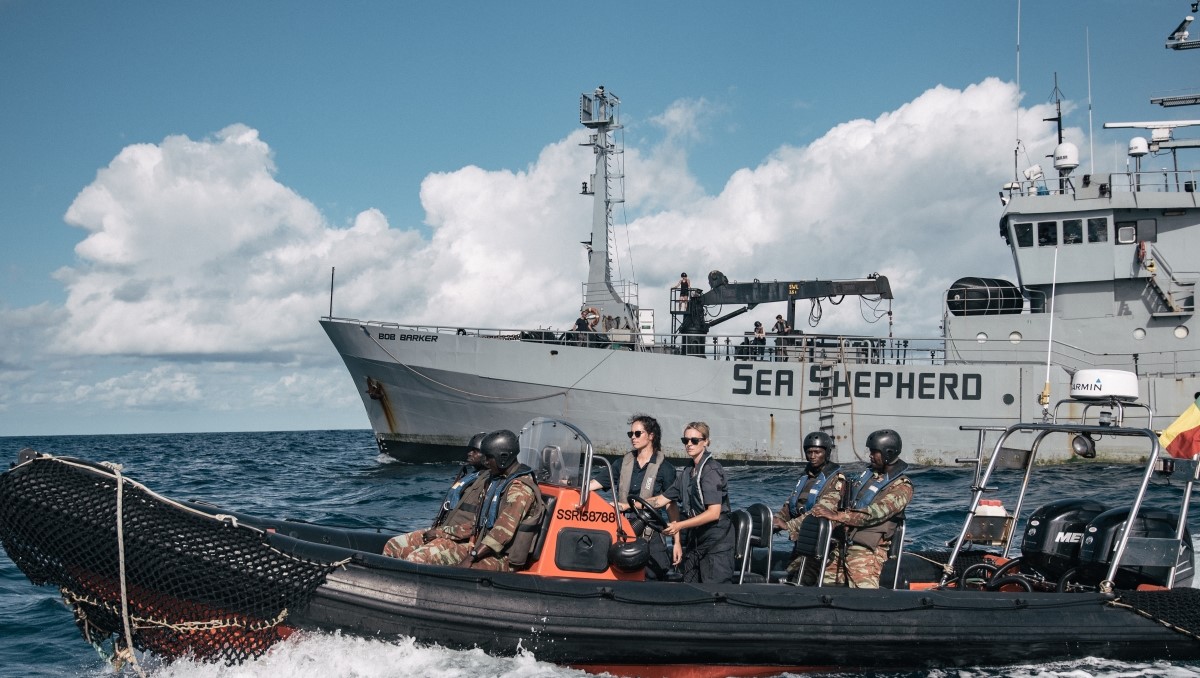 In a joint operation in partnership with the government of Benin to tackle illegal, unreported and unregulated (IUU) fishing in the Gulf of Guinea, Sea Shepherd crew and local nongovernmental organization (NGO) Eco-Benin worked together with law enforcement agents representing the State Action on the Sea, the Navy of Benin and the Ministry of Fisheries on board the Sea Shepherd vessel Bob Barker on a 20-day patrol to stop poaching activity in the waters of Benin.

The first patrol of a one-year partnership, titled ‘Operation Guegou’ (local Wxla language for “Big Tuna”), resulted in the boarding and inspection of 8 fishing vessels, one of which was arrested and brought to the Beninese Port of Cotonou for not having the proper paperwork on board. The patrol - under the direction of the Beninese government - covered the entirety of Benin's waters and included a particular focus on Benin’s borders with neighboring Togo and Nigeria where incursions by foreign industrial fishing vessels fishing without a license have occurred in the past.

“The presence of the Bob Barker in the waters of Benin has enabled Beninese officials to build capacity while also deterring illegal fishing activity. Evidence uncovered during the course of the patrol has provided the State Action on the Sea with critical information that will be used to strengthen existing laws and regulations protecting Benin’s biodiversity”, said Maxime Ahoyo, the Préfet Maritime (or Maritime Commissioner) of Benin who directed Operation Guegou.

Beninese inspectors observed the impact of non-selective fishing methods on marine wildlife such as threatened species like silky sharks and rays as well as a lack of regulation of fish aggregation devices, essentially ‘fish magnets’ that attract fish.

The presence of armed Beninese Navy sailors on board the Bob Barker also provided merchant vessels with an added layer of protection from the maritime security risk posed by piracy in the Gulf of Guinea region.

“The presence of the Bob Barker in the waters of Benin has provided the Benin Navy with a critical tool for fighting maritime crimes - especially illegal fishing - as well as a floating platform for training and capability-building. Lessons learned will continue to be applied by the Benin Navy as we work on the frontline of defending Benin’s waters from poachers”, said Captain Albert Badou, Navy Chief of Staff.

“Since Sea Shepherd’s campaigns around the African continent began, our message has been that illegal fishing must be seen within a greater maritime security context. Both illegal fishing and piracy thrive in areas where there are challenges to monitoring, control and surveillance. We are incredibly proud of our new partnership with Benin, a Coastal State with the political will to stop illegal fishing and which is leading the way in creating safer waters for all in the Gulf of Guinea,” said Peter Hammarstedt, Director of Campaigns for Sea Shepherd Global.

The waters of Benin are particularly rich in biodiversity as the country is positioned in a wildlife corridor frequented by migrating tuna and humpback whales. Benin also hosts the UNESCO-listed Mono Biosphere Reserve, home to nearly 2 million people in Benin and Togo and consisting of mangroves and lagoons critical to fish nurseries.

“Operation Guegou is a unique opportunity to save our marine biodiversity, especially marine wildlife on the International Union for Conservation of Nature (IUCN) Red List of Threatened Species; to conserve the UNESCO-listed Mono Biosphere Reserve; and to increase our ecotourism highlights in Benin”, said Gautier Amoussou, National Coordinator of Eco-Benin.

Sea Shepherd’s partnership with Benin marks the fourth government in the Gulf of Guinea to join a growing effort to stop illegal fishing in the region through joint at-sea patrols.

Since 2016, Sea Shepherd has been working in partnership with the governments of Gabon, Liberia, São Tomé and Príncipe and Tanzania to combat IUU fishing by providing the use of civilian offshore patrol vessels to African coastal states so that authorities can enforce fisheries regulations and conservation laws in their sovereign waters. To date, the unique partnerships have resulted in the arrest of 29 vessels for illegal fishing and other fisheries crimes.

9637 - Bob Barker on patrol in the waters of Benin. Photo Rebecca Griffiths/Sea Shepherd.