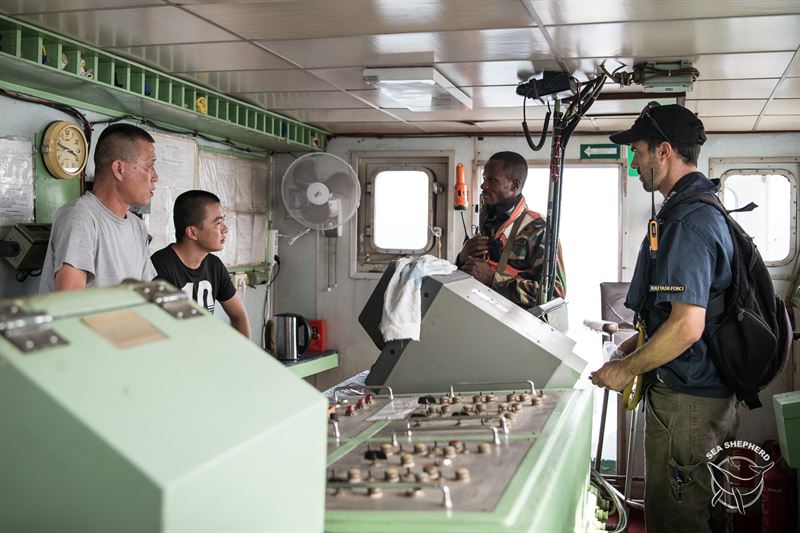 Over Christmas, the Liberian Coast Guard, assisted by Sea Shepherd crew, arrested the Chinese-flagged (M/V) Hai Feng 823, a 74-meter refrigerated cargo vessel (or reefer), with a history of illegal fishing, as it attempted to offload a cargo of transshipped fish in the West African port of Monrovia.

Transshipment is the act of transferring fish from one vessel to another - often done at sea between fishing vessels and reefers - sometimes done to obscure the origin of the illegally-caught fish.

The M/V Hai Feng 823 has previously transshipped with two other arrested vessels: the M/V Lian Run, arrested by the Liberian Coast Guard with Sea Shepherd’s assistance on March 21, 2017 for tax and customs fraud, and the fishing vessel (F/V) Seta 70, arrested by the Liberian Coast Guard on July 22, 2011 for fishing without a license in Liberian waters. The M/V Hai Feng 823 has also been denied port access to Las Palmas, Canary Islands.

During the inspection, the captain of the M/V Hai Feng 823 presented the Liberian Coast Guard with an official set of paperwork indicating that there were 21,409 cartons of fish on board the vessel.

However, hidden away in a back office, the Liberian Coast Guard uncovered an unofficial set of paperwork indicating that there were actually 25,459 cartons of fish on board the vessel, a discrepancy of over 8 tons of fish.

“Vessels involved in tax and customs crimes will often keep two sets of paperwork on board: a false set that they present to authorities during inspection and another true accounting that is presented to the ship’s company but is kept hidden from law enforcement agents. Presenting the Liberian Coast Guard with false documentation is a serious crime in Liberia”, said the Honorable Daniel Ziankahn, Liberia’s Minister of National Defense.

The M/V Hai Feng 823 was arrested on suspicion of lying to a Liberian Coast Guard officer, presenting falsified documents and conspiring to violate the tax and customs law of Liberia.

“Refrigerated cargo vessels are a major contributor to illegal fishing as they are used to launder the catch of criminal operators. On these so-called reefers, legal catch can be mixed with illegal catch, and catch origin can be impossible to deduce. Laundering fish is easier than laundering money. Thus, an important battle to win in the fight against illegal fishing is to close off ports to shady operators. The arrest of the Hai Feng 823 sends a clear message that Liberian ports are closed to fish trafficking,” said Alistair Allan, Sea Shepherd’s captain of the Sam Simon.