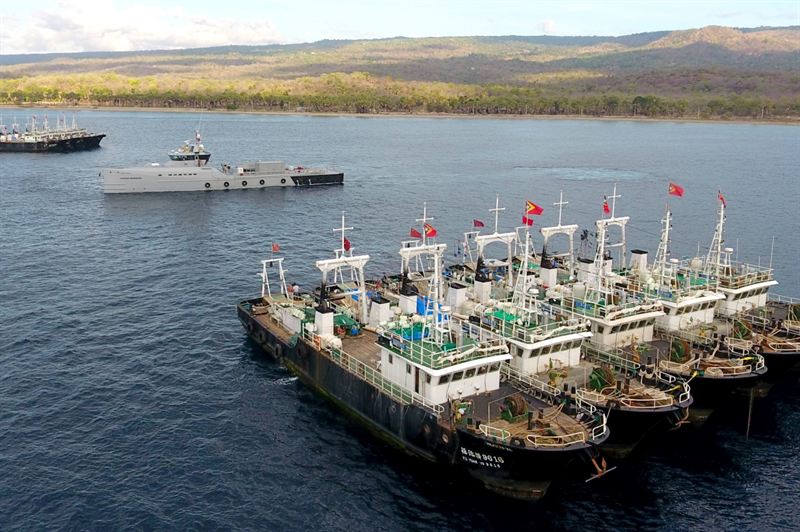 Patience pays off and in this case the Director General of Agriculture & Fisheries of Timor Leste has now exposed himself. Mr Acacio Guterres MAP has chosen publicly to take the side of a known criminal foreign fishing company over the interests of the people of Timor Leste.

Is Mr Guterres protecting the natural resources of the people of Timor Leste as his position requires? How does Mr Guterres know that the Hong Long fleet does not catch protected shark? Is he just taking their word for it? We know that they did have protected sharks in February 2017 but were let off, so how can he claim they do not have any now? The Director General of Agriculture and Fisheries cannot make any claims that they have not caught protected sharks unless he has inspected each sack onboard. He is simple blowing hot air in his statements.

Mr Guterres claims that the Hong Long fleet are not targeting sharks, but just catching sharks that are legal within Timor Leste laws. With over 90% of their catch being shark this is clearly not the case. A copy of the fishing license application states the target catch as “Bottomfish, Grouper, Snapper and Others”. We have never seen such a broad and open ended application, and no serious Fisheries official in their right mind would agree to such a vague application. The fleet itself have been documented by Sea Shepherd hauling in their nets and catching mostly shark. At the same time destroying the delicate coral reef.

The fleet was inspected briefly on September 9th by the PNTL (East Timor National Police), however a full inspection was suggested as the holds were full and a thorough inspection would take days. The fleet were not detained when moved to Kairabela, they were left completely unattended with the exception of Sea Shepherd’s ship, Ocean Warrior, which has been monitoring the fleet 24 hours a day. The crews spent the first few days below decks, and then in the evening all started their engines and began driving erratically around the bay at night for no reason at all, other than to possibly dump overboard any species deemed as illegal catch in the deeper waters just offshore. This is the same as allowing a murderer to stay at the scene of the crime, unwatched, to tamper with the evidence at will. If Mr Guterres was acting in the interest of the people of Timor Leste, he had every opportunity after the raid was made public on September 9th, to visit and conduct a full inspection these vessels. He chose not to.

The people of Timor Leste should be proud of the initiative of the PNTL led by Commandant Jorge Monteiro and his team. They have Timor Leste’s interests at heart and not the satisfaction of a privately-owned, criminal foreign fishing company. We hope now that Mr Guterres has exposed himself in the local media, that the president and government of Timor Leste along with the PNTL will conduct a full investigation, not only into the actions of the Hong Long fleet but also into the intentions and allegiance of Mr Guterres, as it is clear he is not working in the interests of the nation in this case. This is a criminal matter, not an administrative one, that should be handled by the Prosecutor. We trust the Prosecutor will do justice for the people of Timor Leste.

Sea Shepherd is in the process of filing a full legal report of the activities of this fleet as well as a second fleet that Mr Guterres has also sold a fishing license to. Vessels from the second licensee were documented by Sea Shepherd in the same area 150km south of Timor Leste using illegal drift nets. The international law on drift nets is 2.5km maximum length, yet Sea Shepherd has evidence which it has handed over to the PNTL of these vessels setting nets over 10km in length.

The report will be sent to all relevant countries and law enforcement agencies including Interpol. Sea Shepherd will again call upon the assistance of the Chinese Government to aid in bringing these illegal operators to justice. In both cases they are privately owned companies committing crimes and bringing unnecessary shame to China internationally, with the soul purpose of profit for their shareholders. Last year Sea Shepherd discovered a fleet of six illegal drift net boats operating in the Indian Ocean and reported them to the Chinese Bureau of Fisheries who took positive action. China is taking IUU (Illegal, Unreported and Unregulated) fishing crimes very seriously and we hope that they will also take action again in these cases.

Timor Leste has one of the highest levels of marine biodiversity on the planet, an unspoilt resource that if managed correctly will bring millions of dollars to the local economy. One person who realizes this is Dr. José Ramos-Horta who was promoting eco-tourism for Timor Leste recently in Singapore. When asked about these foreign fleets plundering local waters the former Prime Minister stated: “Unscrupulous foreign commercial fishing activities must be stopped in Timor Leste. We must protect our natural resources, it is an outrage.”