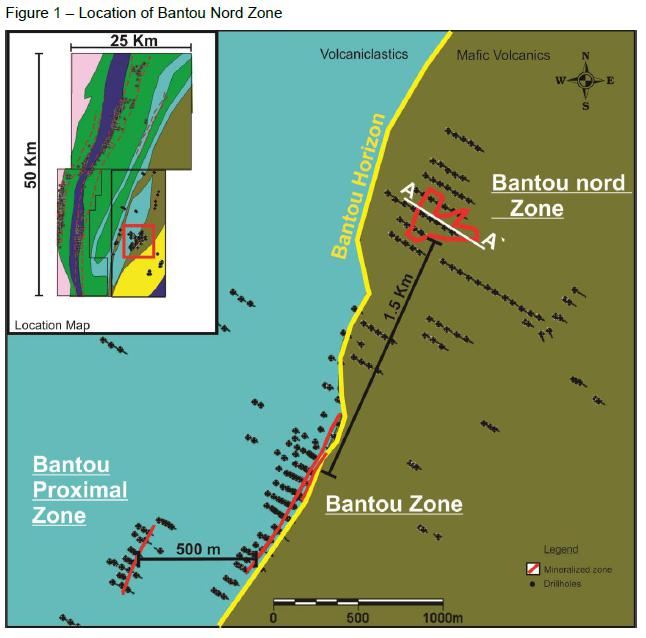 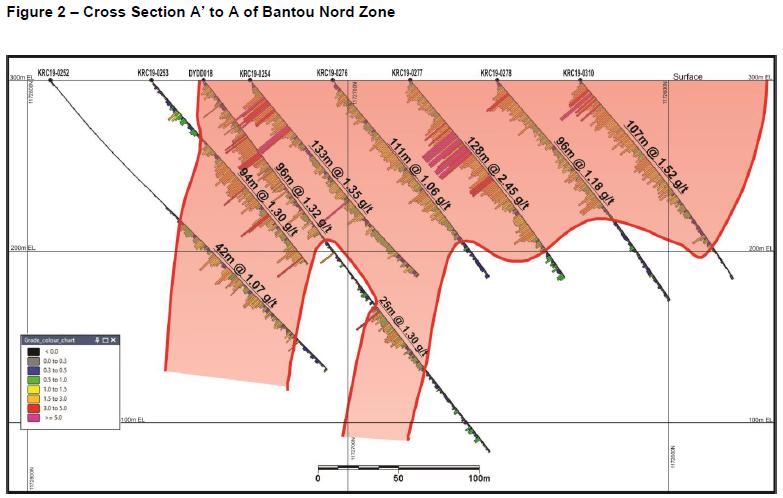 The majority of drilling on Bantou Nord has been reverse circulation (RC) with one core hole for initial metallurgy analysis, as discussed below. KRC19-0277 provided the best intersection with 128 meters grading 2.54 g/t Au, but there were multiple intersections of +/- 100-meter lengths with grades ranging from 1.1 g/t Au to 1.5 g/t Au. In addition, some higher-grade intervals in drill holes (e.g., KRC19-0277 returned 6.50 g/t Au over 26 meters) suggest potential for outlining gold-enriched areas within the zone.

The mineralization at Bantou Nord consists of 1%-5% fine disseminated pyrite within alternating intermediate intrusive and volcaniclastic rocks. Although the enriched zones seem to be spatially associated with the intrusives, the zone itself is found in both rock types. No clear visual alteration or deformation seems to be associated with the mineralization. Higher grades are obtained from both weakly chloritized rocks and strongly sericitized altered varieties. Nonetheless, the western limit of the mineralization appears quite abrupt and trends NNE, parallel to the general strike of the rock formations. The mineralized zone is located in the stratigraphic footwall of the Bantou Banded Iron Formation (BIF) and chert horizon. In view of the apparent volcanogenic origin of Bantou and the lack of orogenic characteristics at Bantou Nord, both are believed to be cogenetic. Further studies are underway to improve our understanding and to guide further exploration.

Following completion of core hole DYDD018, three samples were sent for preliminary metallurgical testing using standard Mana mill recovery parameters. Results suggest that Bantou Nord would be amenable to standard parameters with test recoveries of greater than 90% in the oxide and greater than 85% in the sulfide. No significant variations were seen between intrusive- and volcaniclastic-hosted mineralization. To date, density measurements on the core hole average 2.8 g/cm³, similar to our history at Mana.

Since the closing of the Savary acquisition, the Karankasso database has been merged with the Bantou database. The transition with the Savary team continues in an orderly fashion with everyone working together towards the common goal of maximizing the potential of the combined 1,250 km² district-scale property. We expect to provide an updated budget and exploration plan on the Karankasso property in the third quarter.

Additional results from preliminary metallurgical testing on fresh rock sulfides have been received from the Karankasso property. Testing involved nominal parameters, including P80 -75 micron grinding and direct leaching. Location, sample selection and preparation were completed in April by Savary prior to SEMAFO’s involvement. Of the 25 samples tested, 21 were drawn from mineralized sulfide zones showing economic potential (Kien, Kueredougou West, Diosso, Serakoro, and Karangasso) and returned an average recovery rate of 81% in the sulfides. Previous testing had shown over 90% recovery for the oxide and over 80% for the sulfide material. Some variability was noted in the results, which is considered normal and expected at this early stage. “Given the test results to date, recovery is not an issue,” stated Sylvain Duchesne, Vice-President, Processing & Metallurgy. "We expect to improve recovery results, as we did at Mana and at Boungou. For example, a similar preliminary rate of recovery in the sulfides at Boungou was increased to its current level of 96%.”

Richard Roy, Vice-President, Exploration, stated: “The Bantou Nord Zone discovery provides tangible evidence of the geological potential of the 1,250 km² district-scale property. Work has not yet commenced on the Karankasso property, and we already have a new discovery on Bantou. Bantou is located on the Houndé Greenstone Belt, one of the most prolific belts in West Africa. Like Mana, Bantou is showing a variety of mineralization styles and origins. We are very excited about the future of Bantou and what remains to be discovered.’’

Richard Roy P. Geo, Vice-President, Exploration, is the Qualified Person for the information contained in this press release and is a Qualified Person within the meaning of National Instrument 43-101.

The estimate was prepared using a block model constrained within 3D wireframes of the principal mineralized domains. Values for gold were interpolated into blocks using a 3-pass ordinary kriging (OK) interpolation method. High grade assay values were capped at 50 g/t Au and bulk densities from 2.3 g/cm3to 2.8 g/cm3were used based on weathering. A preliminary open-pit optimization algorithm was run on the estimated grade block model to constrain the resource. The resource estimate assumes a long-term gold price of US$1,500/ounce. The mineral resource estimate comprises mineralization contained within the preliminary pit shell at cut-off grades ranging from 0.43 to 0.56 grams of gold per tonne and mineralization below the pit shell at a cut-off grade of 2 grams of gold per tonne.

The mineral resources were estimated as at December 31, 2018 in accordance with the definitions adopted by the Canadian Institute of Mining Metallurgy and Petroleum and incorporated into National Instrument 43-101 – Standards of Disclosure for Mineral Projects (NI 43-101). Mineral resource estimates for the Bantou Zone were carried out by an in-house team under the direction of François Thibert P. Geo MScA, Manager, Reserves and Resources Estimation Group, and SEMAFO’s Qualified Person.

This press release contains forward-looking statements. All statements other than statements of present or historical facts are forward-looking. Forward-looking statements involve known and unknown risks, uncertainties and assumptions and accordingly, actual results and future events could differ materially from those expressed or implied in such statements. You are hence cautioned not to place undue reliance on forward-looking statements. Forward-looking statements include words or expressions such as “ongoing”, “believed to be”, “further”, “underway”, “suggest”, “will”, “focus”, “planned”, “continues”, “maximizing”, “potential”, “expect”, “improve”, “committed”, “building”, “leveraging” and other similar words or expressions. Factors that could cause future results or events to differ materially from current expectations expressed or implied by the forward-looking statements include the ability of further studies to improve our understanding of Bantou and Bantou Nord, the ability to improve recovery results at Karankasso, the ability to execute on our strategic focus, fluctuation in the price of currencies, gold or operating costs, mining industry risks, uncertainty as to calculation of mineral reserves and resources, delays, political and social stability in Africa (including our ability to maintain or renew licenses and permits) and other risks described in SEMAFO’s documents filed with Canadian securities regulatory authorities. You can find further information with respect to these and other risks in SEMAFO’s 2018 Annual MD&A, as updated in SEMAFO’s 2019 First Quarter MD&A, and other filings made with Canadian securities regulatory authorities and available at www.sedar.com. These documents are also available on our website at www.semafo.com. SEMAFO disclaims any obligation to update or revise these forward-looking statements, except as required by applicable law.

SEMAFO is a Canadian-based intermediate gold producer with over twenty years' experience building and operating mines in West Africa. The Corporation operates two mines, the Boungou and Mana Mines in Burkina Faso. SEMAFO is committed to building value through responsible mining of its quality assets and leveraging its development pipeline. 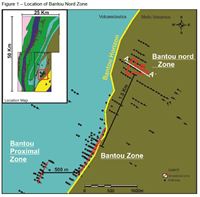