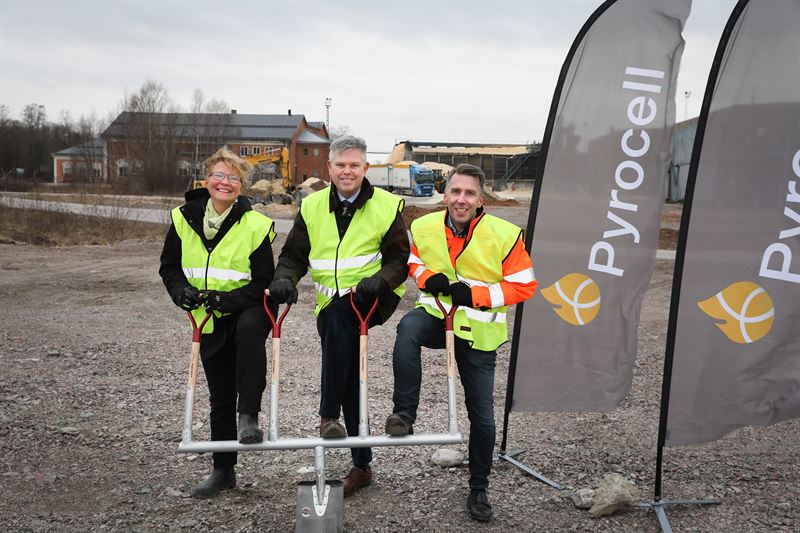 On the 23rd of March the first ground was broken for Pyrocell’s plant at Setra’s Kastet sawmill in Gävle. Pyrocell will be manufacturing non-fossil pyrolysis oil as a raw material for producing renewable fuel.
“This will make the company an important link in the value chain from the Swedish forest to consumers’ fuel tanks,” says Pyrocell Chairman Pontus Friberg.

Wood industry company Setra and fuel company Preem are working together to produce fossil-free pyrolysis oil from sawdust through the jointly-owned company Pyrocell. Pyrocell’s plant will transform sawdust, a waste product in Setra’s industrial process, into pyrolysis oil. The pyrolysis oil will be processed further to make renewable diesel and petrol at Preem’s refinery in Lysekil.

Due to the Covid-19 situation, only very few people were present when the first soil was broken for the Pyrocell plant: Pyrocell Chairman Pontus Friberg, Setra CEO Katarina Levin, and Jonas Jadling, the Mill Manager at Setra Kastet. County Governor Per Bill looks forward to visiting the plant on a later occasion.
“We welcome Pyrocell’s investment and are delighted to see them setting up here in Gävle. The new business will pave the way for more fossil-free fuels, which in turn will demonstrate the opportunities our county has to offer and our ability to participate in the work to transition to a fossil-free society nationwide. This means jobs, plus great interest from the climate and fuel industry, which sees great potential in the new technology to produce bio-oil from sawdust,” says County Governor Per Bill.

“This investment is part of Setra’s strategy to increase the value and the climate benefit of our products. Pyrocell is an important link in the value chain for renewable fuel. This commercial processing of sawdust will help us contribute to the goal of fossil-free transport in Sweden by 2030,” says Katarina Levin, CEO of Setra.

The ground-breaking plant will produce about 25,000 tonnes of pyrolysis oil per year, equivalent to the annual fuel consumption of 15,000 cars. The aim is for the plant to be brought on stream in the fourth quarter of 2021.

“Waste products from our Swedish forests offer unique potential in helping Sweden to eventually become self-sufficient in liquid fuel, instead of importing 85% of it as we do today. This investment is part of Preem’s ambition to manufacture 5 million cubic metres of renewable fuel by 2030 in our refineries in Lysekil and Gothenburg,” says Petter Holland, CEO of Preem.

Pyrolysis is a process in which a substance is rapidly heated to a high temperature so that the solid material is vaporised and can be condensed into a liquid. Through pyrolysis, waste products from the forest, such as branches, roots, tops and sawdust, can be turned into oil, which can then be refined into renewable petrol and diesel.

About biofuels
In 2018, a total of around 9.5 million cubic metres of fuel was sold in Sweden, of which approximately 1.9 million was biofuel, according to the Swedish Petroleum and Biofuels Institute (SPBI). Around 15 percent of all biofuel was produced in Sweden, with the rest being imported from other countries.

About Pyrocell
Founded in August 2018, Pyrocell is jointly owned by Setra and Preem. The company’s business concept is to produce bio-oil from sawdust. Setra has the raw material, sawdust, while Preem has refineries and filling stations. The pyrolysis oil plant at Setra’s sawmill in Kastet outside Gävle creates a strong new value chain for renewable fuels, from forest to fuel tank.