CALL FOR MORE EMPHASIS ON LITERACY AT CHILDCARE EXPO 2011 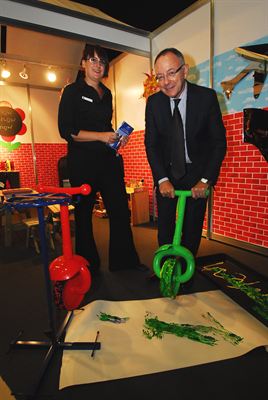 Patrick Leeson, Director of Development, Education and Care at Ofsted, called for more emphasis on literacy, language and communication in the early years when he opened Childcare Expo 2011 on Friday (16th September).

Speaking on the first morning of the annual two-day event in Coventry he told his audience that the proportion of children working securely in communication, language and literacy stands at 59% compared to 77% for personal, social and emotional development.

He said everyone working with children in the early years, from childminders and nursery practitioners to politicians and policy makers, needed to make language and literacy a priority from now on.

Mr Leeson was discussing the future of the Early Years Foundation Stage (EYFS) and how Dame Clare Tickell’s review will impact early years settings in the future.

His talk was one of a series of seminars and workshops taking place throughout the expo which included child protection, recruitment, IT and public relations for nurseries and childminders.

Among the highlights of the event was an interactive feature area showing how settings can make best use of their outdoor spaces. Early Years Outdoors: Magical Journeys was created by educational charity Learning Through Landscapes and equipment suppliers TTS Group.

Another popular attraction was the series of hands-on workshops on the theme of Play on a Budget which introduced bright ideas for inexpensive play in early years settings.

“As organisers we’ve been impressed by the positive response by visitors and exhibitors to Childcare Expo 2011,” said Event Director Emma Barrett. “Our exhibitors and sponsors all had a successful show and visitors liked the fact that there was so much for them to get involved with.

“We found our new features Early Years Outdoors: Magical Journeys and Play on a Budget workshops to be very popular and we were pleased that the seminar by Patrick Leeson from Ofsted sold out.

“We’re now looking forward to organising Childcare Expo 2012 and hope it will continue to build on this year’s success. We look forward to seeing everyone there!”

One exhibitor who travelled from Iceland to be at Childcare Expo 2011 was Hulda Hreidarsdottir of toymakers Fafu.

“The expo has been really good,” she said. “The visitors have all been of good quality and we’ve had some great conversations with people who have come to our stand. We’ve definitely got some business from it. Some people have been buying and we’ve had some consultants showing an interest in our products.”

“It’s very useful, especially for picking up bits and pieces, and it’s very good that you can actually buy the products here,” she said.

“I came last year and found the seminars really useful so that’s why I’ve returned this year. It’s a good event and I’m hoping to come back again in 2012 too.”