Jade Will Fly the Flag for Lincoln at the Winter Games 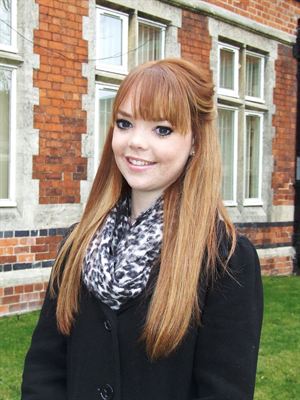 A Lincoln graduate and trainee teacher will be flying the flag for GB at the Winter Paralympic Games next month.

Jade Etherington (22), who graduated from Bishop Grosseteste University two years ago with a degree in Education and Geography, has been included in the Paralympics team to compete in Sochi.

Born with glaucoma and Axenfeld Syndrome – a rare eye disorder – Jade has less than 5% vision in each eye.

She is Britain’s number one visually impaired alpine speed event ski racer, winning a bronze medal in the 2013 World Championships and reaching the medal podium 28 times in 32 races.

If she wins a medal in Sochi she will make history by becoming the first ever British alpine skier to make the podium at a Winter Paralympic Games.

“Jade is not only an inspirational athlete but an inspiration to everyone she meets,” said Graham Meeson, Head of Education and Learning at Bishop Grosseteste University.

“Her attitude and the way she has handled steadily losing her eyesight is a testament to her character and she has demonstrated that there really is no barrier that can prevent you achieving your goals and competing at the highest level.

“We’ll be following her progress in Sochi and we really hope to see her back in Lincoln with a gold medal!”

Skiers with blindness or a visual impairment are guided through the race course by a sighted guide using signals to indicate the course to follow. This involves a high level of trust between the athlete and the guide, and they are both awarded medals if they reach the podium.

Jade competes with ex-Team GB athlete Caroline Powell, who skis closely in front of Jade at speeds of up to 65mph and uses pre-determined commands via helmet radios to help Jade to negotiate the course as quickly as possible.

Jade is currently out of the country training in preparation for the 2014 Winter Paralympic Games.