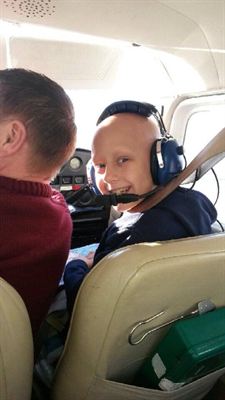 Lincoln-based public relations agency Shooting Star PR has announced that The Ethan Maull ‘Up Yours To Cancer!’ Foundation will be its chosen charity of the year for 2014.

Each year the agency provides free advice and expertise to a different local charity or not- for-profit organisation which would not otherwise be able to afford ongoing PR. The charity was chosen to benefit from the pro bono work after a family friend sent a moving letter explaining Ethan’s condition and sheer determination to help others through his charity.

When a family friend was diagnosed with breast cancer, Ethan, then six, helped his father Darren raise £4,000 for Cancer Research UK by joining him on the final leg of their challenge – to make the final ascent to the top of Mount Snowdon.

Sadly, just two and a half years later in December 2012, Ethan, who turns 10 on 4th February, was diagnosed with a rare form of children’s bone cancer called osteosarcoma.  The foundation was set up by Ethan and his family to help raise awareness of the condition and help raise funds to help others in a similar situation.

“Being chosen as the charity of the year by Shooting Star PR is so exciting,” said Sam Maull, Ethan’s mother.  “All our friends and family have done so much to help promote the ‘Up Yours To Cancer!’ Foundation but this will make a massive difference by helping us to reach more people.

“Despite Ethan’s illness he is still filled with an admirable drive and passion to help others and raise money for charity.”

Plans include buying toys and gifts for children on E39 Ward at Nottingham’s Children Hospital where Ethan receives care, as well as raising funds to purchase a property, to be called ‘Ethan’s House’, which could be used by families while their children are having prolonged treatment.

The charity has so far raised £60,000, but needs thousands more to reach its target.

“I want to thank everyone who put me forward for Shooting Star PR’s charity of the year,” said Ethan, who is one of only a handful of children in the UK to suffer from this type of cancer.

“I’d like my foundation to be known all over the UK and even the world – that would be awesome!”

Ethan is currently undergoing treatment using Zoledronic Acid, as the initial osteosarcoma treatment has been ineffective on his tumours. It is hoped that he will have surgery this year, providing his new chemotherapy treatment is successful.

Cerri Delaney, Account Manager at Shooting Star PR, will be handling the charity’s PR work. “We received a high number of very worthy applications this year, which made our decision quite difficult,” explained Cerri.

“We were really touched by Ethan’s story and considered it a very worthy cause. We’re looking forward to working with Ethan to say ‘Up Yours To Cancer!’ and helping him raise funds for the E39 ward and Ethan’s House.”