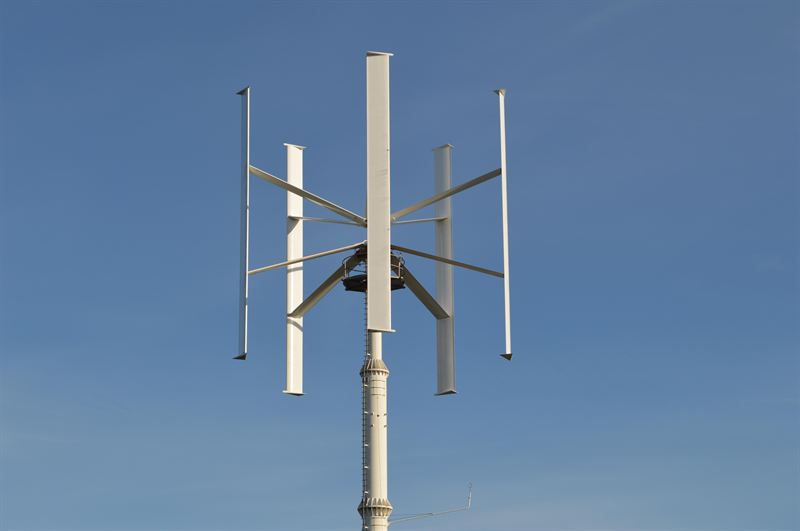 It was designed by some of the UK’s leading structural, aeronautical and electrical engineers, and is being manufactured by a supply chain of world class blue-chip partners.  The main focus of the design concept was to avoid fatigue, an ongoing issue in HAWTs with wind coming from all directions, creating bearing and gearbox stress due to yaw/pitch requirements, plus vibration and ultimately failure or the need for extensive maintenance prior to the 20-year recommended lifespan.

The VAWT is designed with low drag airfoils and a low rotor speed of 32 rpm.  There is no need for a blade pitch control system, and with power, electronics, motor and gearbox at ground level for easy maintenance, wear is considerably reduced and performance improved well beyond the 20-year predicted lifespan.

4Navitas worked with Siemens and partners HMK over a period of 18 months to refine the design and engineering of the wind turbine, and from this long-term collaboration a robust and efficient turbine with excellent power output has been developed.  Drive, motor, coupling and gearbox use the Siemens integrated drive system (IDS) for best performance and extended life.  Output is now rated at up to 75kW with plans for a 1-megawatt version already in the pipeline.

The 4Navitas VAWT houses a Siemens FZG helical bevel gear unit at its base, and the IE3 rated motor is close coupled with the gearbox.  The shaft is supported by bearings down the mast so gearbox load and fatigue transfer is significantly reduced.  All these factors are designed to extend the lifespan of the turbine and improve its long-term reliability.

The power from the wind is controlled by a Siemens S7-1200 PLC and a Siemens Sinamics S120 system.  The S120 harnesses the wind power, even in turbulent conditions, and by using Active Front End (AFE) technology connected and synchronised to the supply, transmits power back to the 415V 3-phase grid.

Simon Grant is business development manager for offshore renewables with HMK.  He commented: “By providing 4Navitas with engineering and technological support – including power curve support from our Siemens colleagues in Germany – we were able to develop and refine the function blocks, drive technology and software.  What we were also able to bring was added value and partnership to meet the challenges together and produce the best solution.“

Another significant advantage of this VAWT is that by effectively earthing through the 4Navitas-designed tower, two buttress legs and grillages, resonance and noise is reduced to just 40dB – the equivalent of a quiet library.  Noise is an ongoing issue with onshore wind turbines and this reduction in noise means the 4Navitas turbine can be situated in populated areas, near schools, hospitals and within communities.  In micro-generation terms, the 4Navitas turbine has a height of 37 metres, significantly less than its HAWT counterparts, taking up a much smaller footprint with no need for a large concrete base.

Dominic M’Benga, director of 4Navitas, explained, “Independent studies such as the Sandia Report identified that vertical axis wind turbines have the potential to be more suitable than the current widely adopted HAWT, and our developed model represents the next generation of high performance, low maintenance wind turbines for micro-generation.“

The Sandia Report, published in January 2012, confirmed that VAWT design and philosophy was the preferred type, and one that considerably reduced operating and maintenance costs over the lifespan of the turbine.  In fact, the VAWT has been around since Persian times, when it was used for grinding corn, but the wide adoption of HAWTs over the last decade has led to engineers neglecting the potential of the VAWT.

The 4N-55 VAWTs are now moving into serial production, after receiving considerable interest worldwide, and after undergoing extensive and successful testing, including testing to almost three times normal operating speeds (100 rpm at the mill).

As Dominic M’Benga confirmed, “Our turbine can take wind from any direction without suffering the vibration and wear issues of horizontal axis turbines, because it’s designed to turn rather than to hold a hub; there’s no weight transfer onto the gearbox and fewer moving parts.  We’ve over-engineered it to last 25 years and in fact the wings and spreaders have reserve factors as high as 64, showing that the mill will survive way beyond its operational life.  By engaging with Siemens we have been able to bring it to market much sooner and to feel confident in our UK designed and built product with the additional benefit of Siemens‘ worldwide local support.  The enquiries we’ve had are testament to this successful partnership.“

4Navitas is already working on developing a 1-megawatt VAWT turbine – again with Siemens and HMK – and aiming to achieve IEC 61400 accreditation in the near future.  The company is also considering international licences for its worldwide manufacture.

Richard Fear is business development manager for Siemens IDS systems.  “Working with 4Navitas on this innovative micro-generation project has been an excellent application of our IDS principles, helping develop a highly-efficient turbine with good power output.  The long-term projections for this VAWT turbine are significant, both in terms of applications and enhanced asset life.“

See more about the range of Siemens solutions for industry at www.siemens.co.uk/industry

Siemens is a global technology powerhouse that stands for engineering excellence, innovation, quality, reliability and internationality. The company is active in more than 200 countries, focusing on the areas of electrification, automation and digitalisation. One of the world’s largest producers of energy-efficient, resource-saving technologies, Siemens is No. 1 in offshore wind turbine construction, a leading supplier of combined cycle turbines for power generation, a leading provider of power transmission solutions and a pioneer in infrastructure solutions and automation and software solutions for industry. The company is also a leading supplier of medical imaging equipment – such as computed tomography and magnetic resonance imaging systems – and a leader in laboratory diagnostics as well as clinical IT. In fiscal 2013, which ended on September 30, 2013, revenue from continuing operations totalled €75.9 billion and income from continuing operations €4.2 billion. Siemens has around 362,000 employees worldwide on the basis of continuing operations. Further information is available on the Internet at www.siemens.co.uk